Time to Face The Shade

Time to Face The Shade 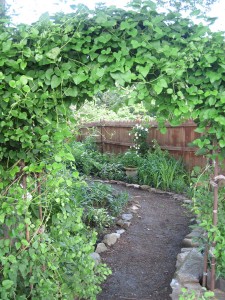 Temperatures have soared, and with them, my enthusiasm. I may be in the garden a bit more frequently than your average dirt-hound, but that doesn’t make me a glutton for punishment. I welcome warmer temperatures, which spark creative thought and motivate me to work on things I haven’t wished to contemplate for several months.

First on the list is a complete re-working of the north side of my front garden. As is often the case with east/west facing houses, one side of my home is sunny and one side is shady, creating a distinct lack of visual balance. This is not to say that a sunny/shady garden cannot be balanced, it is just to point out that, due to the average gardener’s tendencies to plant the sunny side first and wait for a miraculous burst of creative energy to tackle the shady side, it frequently isn’t.

The north side of my house is also occupied by a very large silver maple; and while lovely and climbable, and all of those things that one equates with a mature tree, it is also one of the worst trees you could ever choose to plant on a small lot (probably second only to a black walnut, which was chosen years ago for the back yard). Its continued presence on Third Avenue is due in no small part to its ability to block a particularly annoying street light outside my bedroom window. We therefore live in an uneasy alliance, he and I.

The silver maple’s thirst is extraordinary and satiated only by sapping moisture from the shade plants I have tried to cultivate nearby. The result is a struggling shade garden, an overworked watering wand, and a distinct lack of balance between the south side and the north side of the house. This may not bother the average visitor, but it bothers me, and I am constantly trying new ways to remedy the situation.

One of the first ways of dealing with this problem (short of tearing everything out on both sides, laying gravel and finding a rake and my inner Zen-master) is to find plants specifically for dry shade – which is a great deal different than those labeled with the generic term “shade” – such as your rhododendrons and mountain laurel, who would no sooner thrive in a dry shade environment than they would on a south facing hillside. 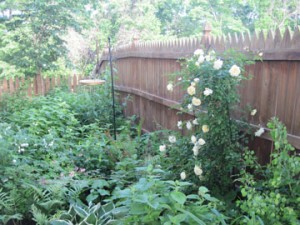 Aside from the fast-growing ground covers like Geranium macrorrhizzum, Lily-of-the-valley, liriope and epimedium, most shrubs and trees of substance (read: balancers) that tolerate or thrive in this environment grow slowly and patience is required.  Six years on, I am only now seeing my first efforts coming to fruition. A climbing Hydrangea petiolaris is taking off up the north wall, a pink kousa dogwood will no longer need the attentions of my watering wand, and a climbing Gardenia rose (great for shade), has strong canes running along the fence where a stray shaft of sunlight has occasionally been known to appear.

Further from the maple’s drip line, more glamorous shade-tolerant plants such as camellias, hellebores and various varieties of fern and oak-leaf hydrangea are still putting down feelers to make sure they are comfortable in their new spots. Only time will tell, and when it comes to shrubs like mahonia, acuba and acanthus – I’m going to need a lot of it.

Meanwhile, I’m not above cheating. Structures used here and there are filling space until their space is happily usurped. An iron-work teepee wrapped with Nelly Moser clematis balances a homemade archway covered in sweet-autumn clematis. Low rock edgings add interest, as does a bird bath or two – at least for my cat Pepper.

And the cheating doesn’t stop there. Plant-wise, I’m seeding the undergrowth with the biennial woodland favorites lunaria and hesperis and relying on stalwart sun perennials that grow taller in shade, but not so tall to be termed “leggy,” such as the roadside daylily (Hemerocallis fulva), agastache, and cleome. A few large planters for an expensive treasure or two, and voila! a shade garden emerges (just not the garden I’ll have in five years’ time).

It can be an uphill battle some days, but understanding and embracing the shady areas of your space expands your horticultural horizons and gives you a cool place to sit when the other side of the garden has more in common with the Sahara than with Sissinghurst. Unless your house collapses, that moss covered square footage is not going to disappear – why not learn how to make it extraordinary?