This isn’t your grandmother’s Show: Philly rocks it with “Explore America”

This isn’t your grandmother’s Show: Philly rocks it with “Explore America” 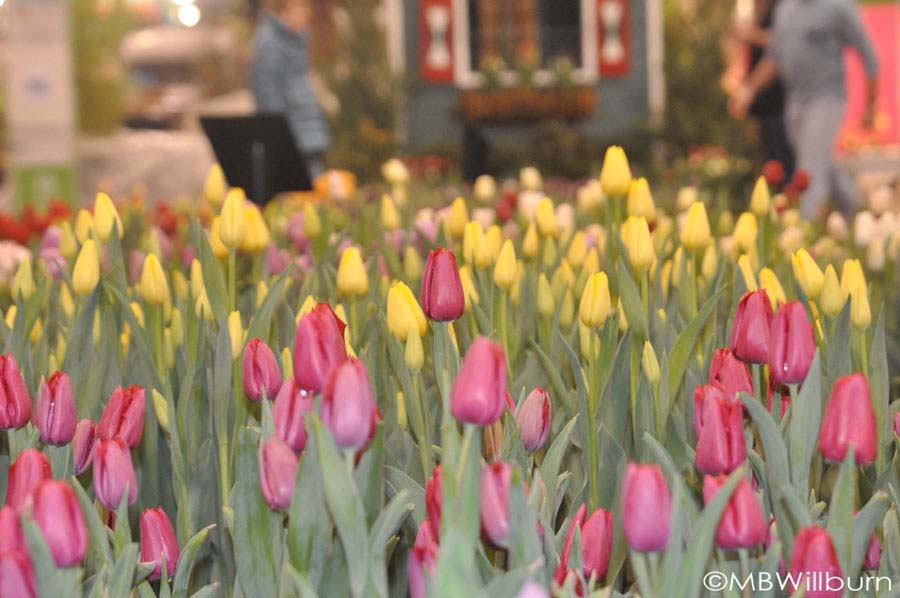 I cannot say I was optimistic this morning, heading north and wondering how on Earth the Philadelphia Horticultural Society was going to pull off a show dedicated to the immense grandeur of America’s National Parks.

They did more than pull it off.  Spring is on display in Philadelphia. And boy is it on display.  As a matter of fact, it’s on display in California…and Wyoming…and Maine…and a number of other states that won’t require that you travel any further than the Philadelphia Convention Center to see them. No sleeping bag required. 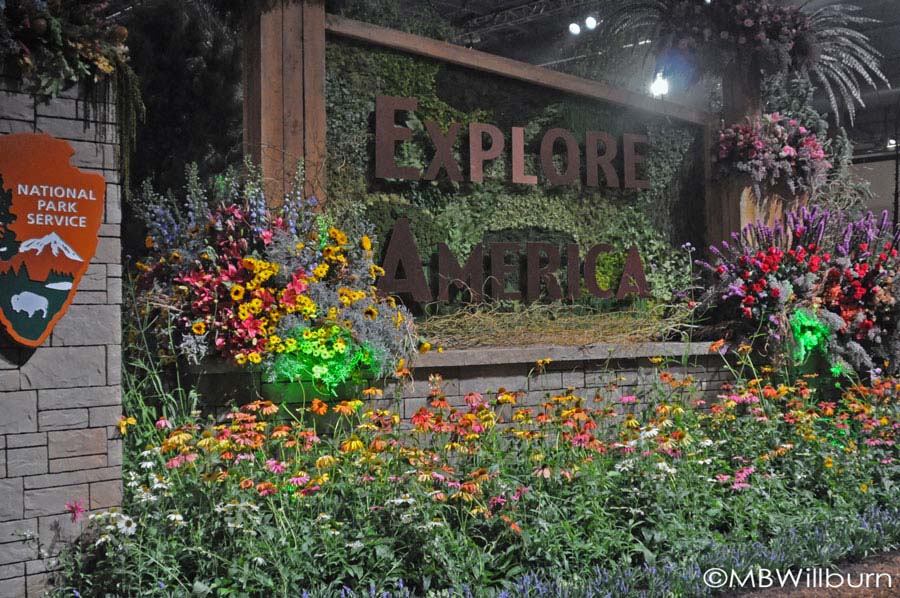 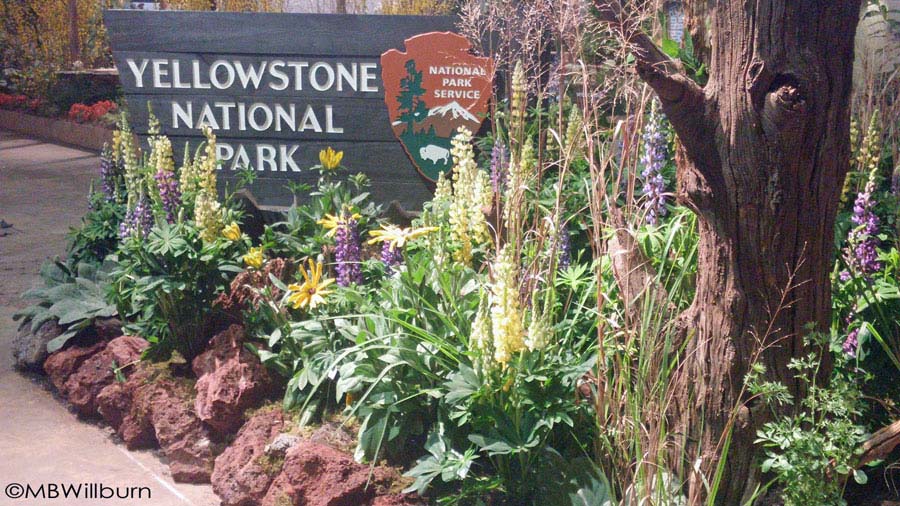 A tremendous theme – a worthy and ambitious theme – did I mention that I wasn’t optimistic? But then, I grew up next door to Yosemite, and spent most of my childhood on field trips grinding acorns against the backdrop of El Capitan.

That kind of majesty doesn’t translate particularly well in an indoor setting. Or at least I thought it didn’t until I walked under the great timbered arch entrance flanked by outrageous floral totem poles, and entered ‘Big Timber Lodge.’ An abstract definition surely, but one that immediately had me looking around for the brunch menu and a friendly waiter with a mimosa. 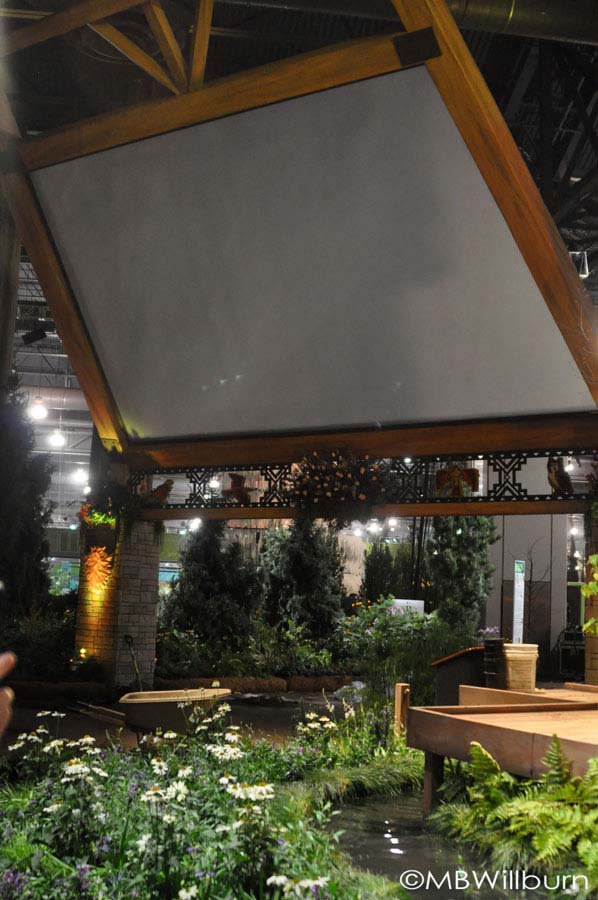 No waiters – but instead, the last of nearly 4000 volunteers and approximately 350 staff were in the final set-up stretch for a show that has been running every year since 1829.

Back then, the main thrust of the show was judging prized horticultural specimens – they couldn’t have conceived of the massive screens that adorn the ‘ceiling’ of Big Timber Lodge, and will stream breathtaking images of our National Parks to an audience who is trying hard to catch its collective breath anyway.

Thanks to the expert planning of Alan Jaffe, Senior Director of Communications and Media for the PHS, and his staff, I was fortunate enough to have a sneak preview with a number of other garden media friends and acquaintances who between us have seen many decades of PHS shows every March.  The response was overwhelmingly enthusiastic – which had to have pleased Matt Rader, the new President of PHS, and Sam Lemheney, Chief of Shows and Events.  They asked for our comments after the tour.

“One of the best shows I’ve seen in the 35 years I’ve been coming.” said Eva Monheim, Landscape Architecture and Horticulture Instructor at Temple University, Ambler.  Monheim may be the teensiest bit biased – many of her Environmental Design students were putting the finishing touches on their incredible rendition of Hopewell Furnace as we passed by, which included a root cellar, water race and inspiring green roof sporting everything from lettuce to marigolds to borage. 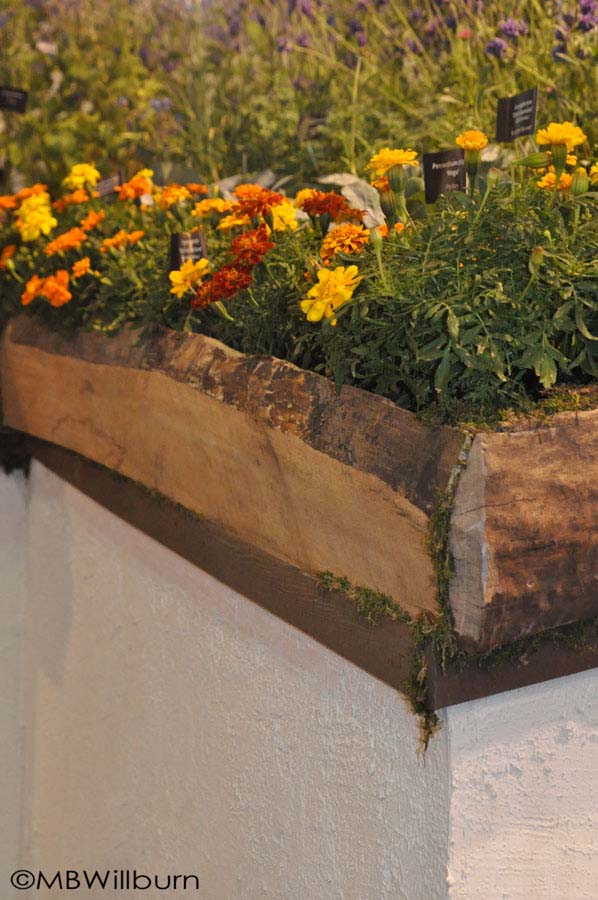 But along with the landscapes, there are always flowers.  Rich, miraculous, obscene amounts of flowers. And, with the warm fall we experienced last year,  visitors will witness an even greater miracle (even though they may not know it) performed by growers who had to tweak and twist and tickle plant material that requires a specific period of cold in order to bloom. 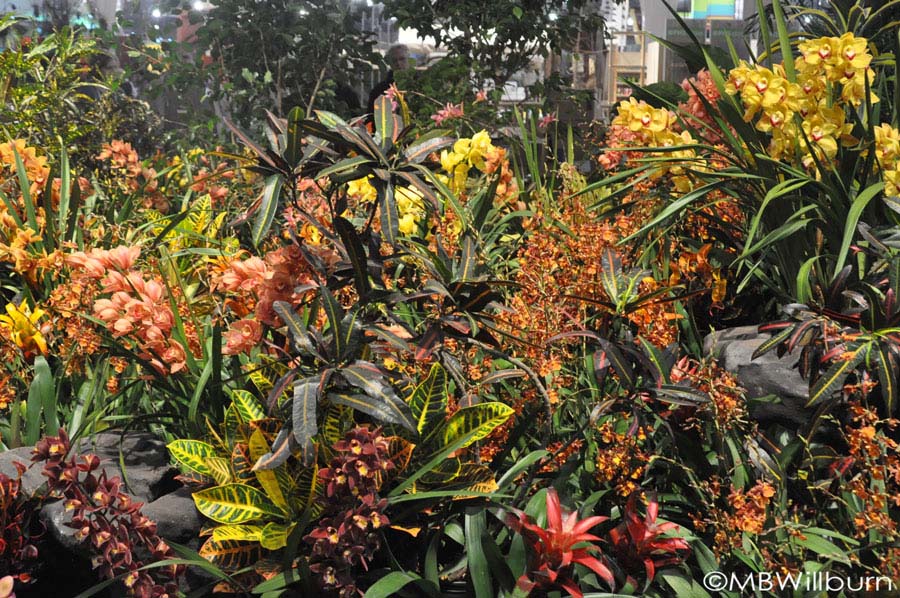 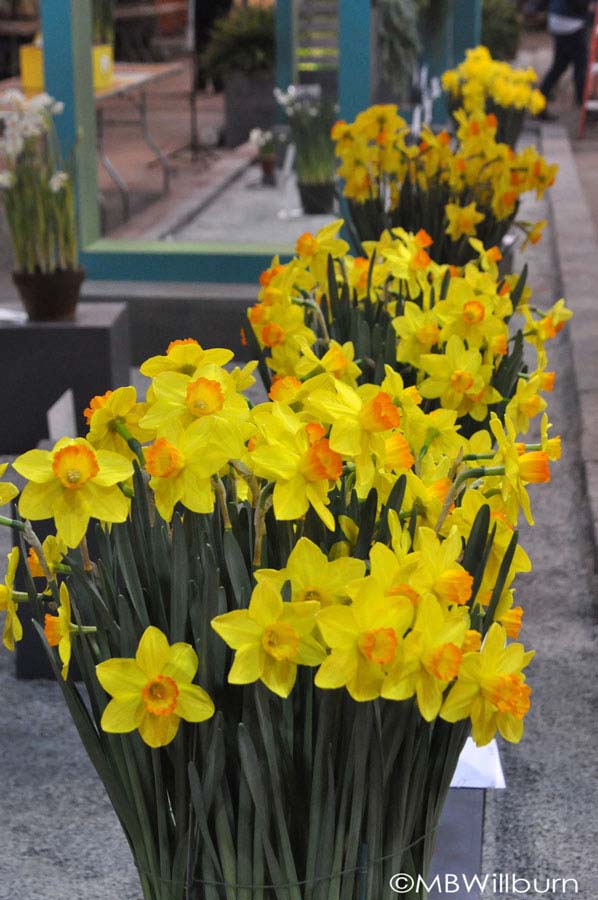 The PHS Show is big.  Very big.  A full two thirds of the square footage is given over to the landscape displays, a third to the Hamilton Horticourt (competition specimens) and floral displays, and another third to vendors who never fail to have something incredible that makes me hand over the card – though I always swear I won’t.   This year, although they’ll be 140 booths to tempt me, I may yet get out unscathed as I brought the husband with me. 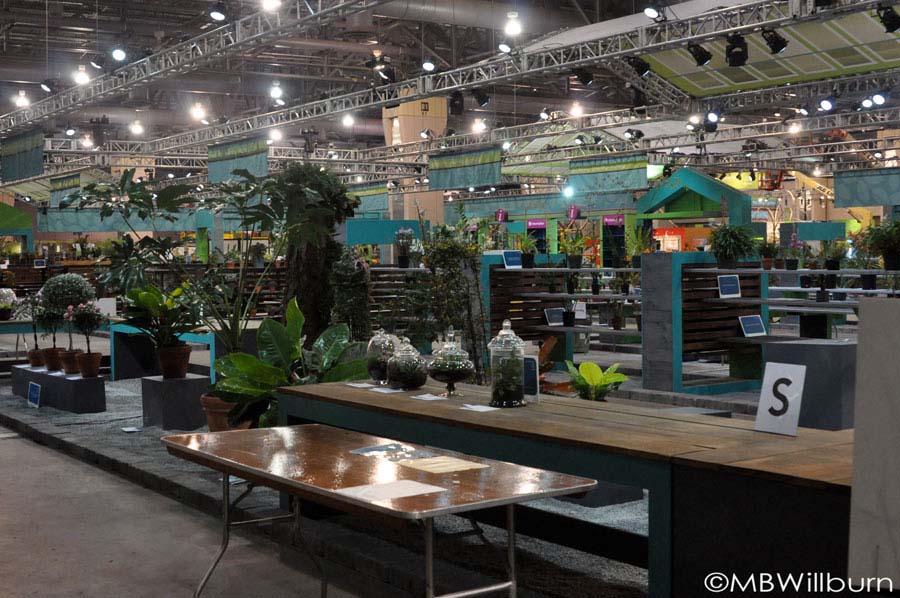 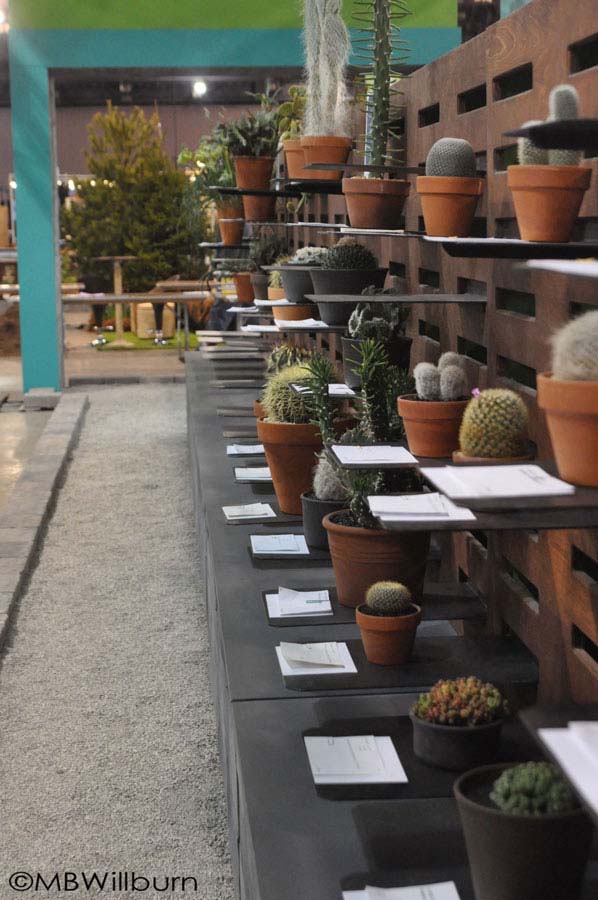 There are ideas everywhere.  For me, this year’s winners in the inspiration department were the competition displays of balcony and windowsill gardens (incredibly relevant to the current book I am writing).  As a brilliant twist, balcony gardens had to be innovative and gorgeous from the dual perspective of inside and out. Make sure you’ve got your notebook and camera for this one – particularly for this green retreat inspired by an Appalachian theme. 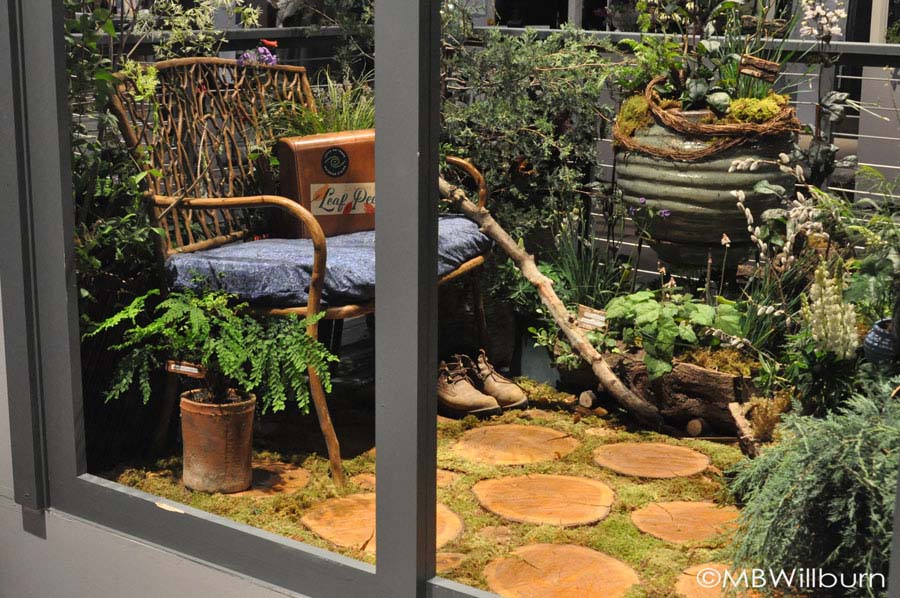 Speaking of inside and out, you can’t very well have a National Park Service themed event and not feature the great sequoias. Subaru, a huge sponsor of the Show, very fittingly took this one on. I had to smile, thinking of the disproportional amount of Subarus in the parking lot at any one time at Calavaras Big Trees (yep, I grew up next to that one too). 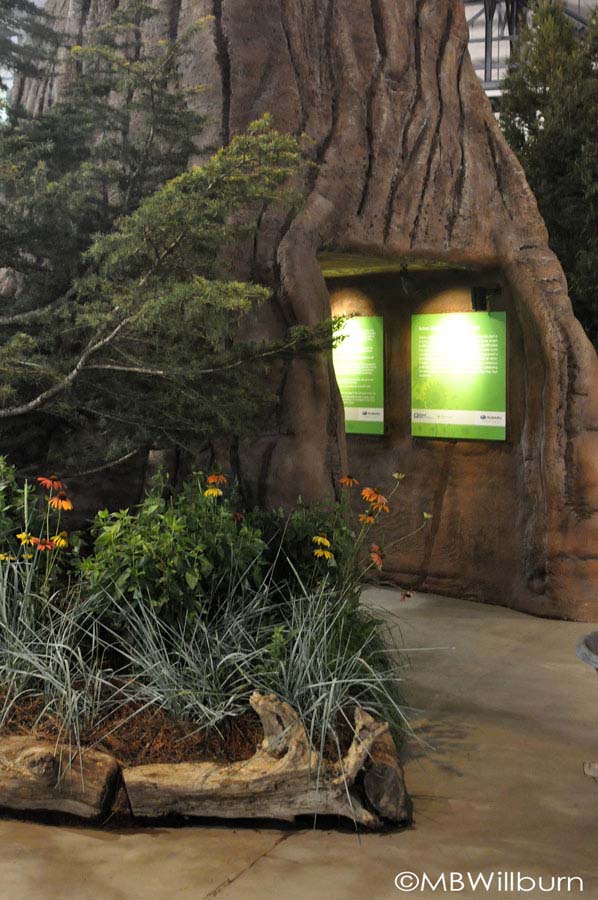 From the quiet rusticity of Abraham Lincoln’s birthplace, to the commanding presence of a 15 foot Liberty Bell, you’re guaranteed to find a familiar park here, reflect on a fond memory and start making plans for another road trip. For me, to see wild lupins at Acadia National Park in Maine, and to finally put Yellowstone on the schedule.  The juxtaposition of wildfire-damaged tree trunks against a burgeoning understory was truly awe inspiring.

But wait campers, that’s not all.  Demonstrations by top-name designers will allow you to sit down, catch your breath and fill your mind with new ideas in the Designer’s Studio, or just provide a place to park your spouse while you get one more look at that windowsill exhibition. In the Grand Hall Concourse outside the main floor you can catch a lecture from one of the many authors and speakers who will be at the show in the week ahead. 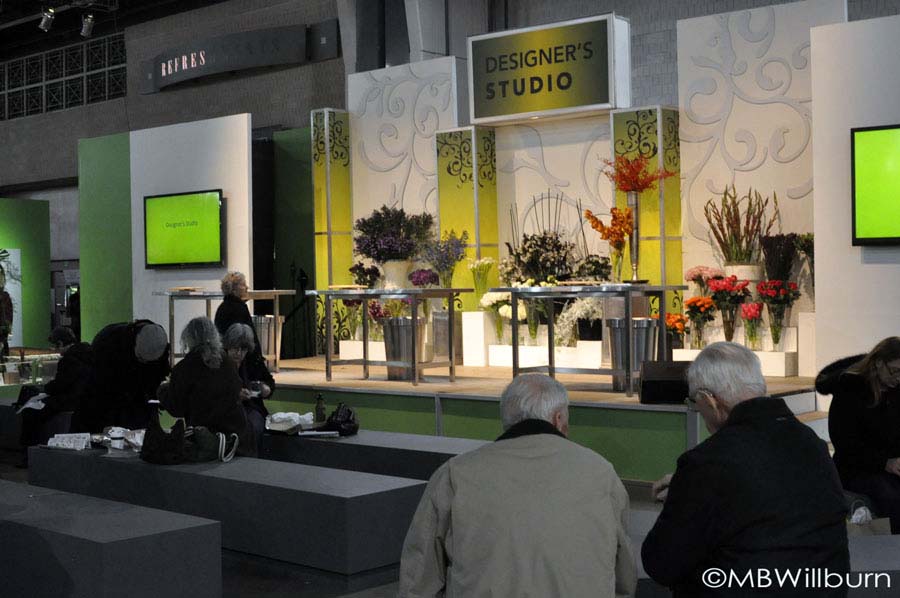 And then there’s just the floral eye-candy. Particularly this dinner-party-to-end-all-dinner-parties given one hypothetical spring evening at Whiskeytown National Recreation Area by Flowers by David. Or was it a wedding reception?  There was a bed involved. 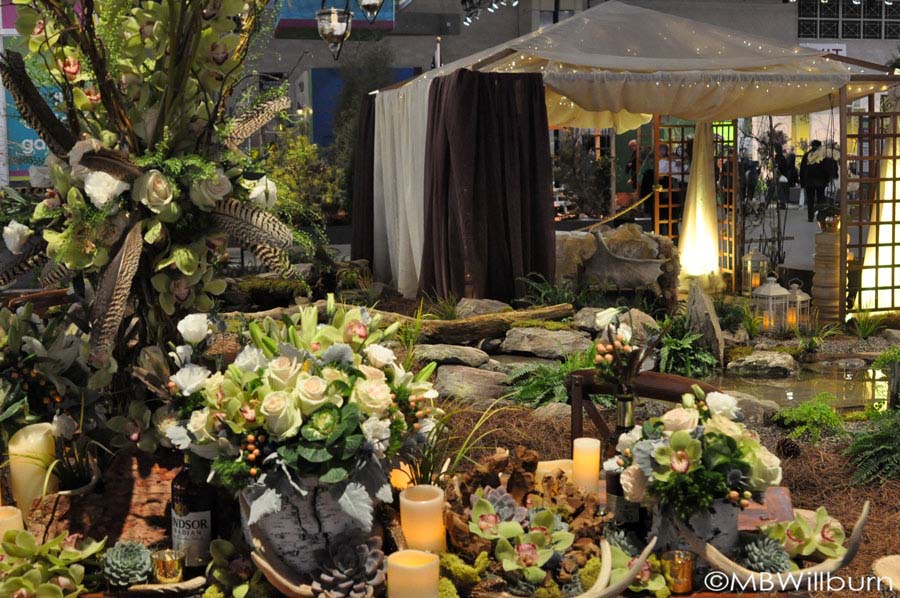 When you use bottles of Seagrams 7 to accent your floral displays, you’ve got my attention (probably because I do it myself with Hendricks and Lagavulin). 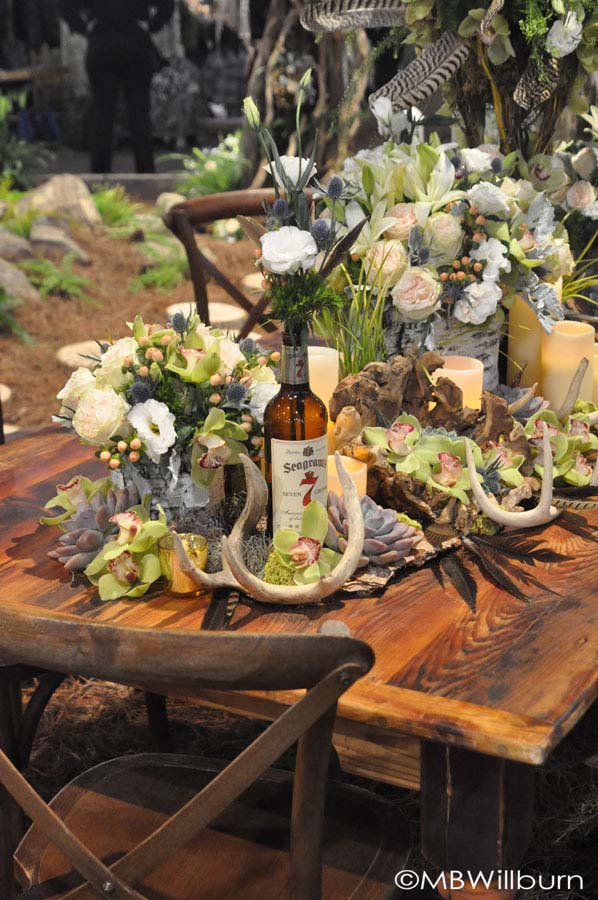 It’s a whole lot of wow in a whole lot of space, and yes, this is a 15 foot waterfall.  Or maybe it’s 20 feet. I was a little overwhelmed by that point. 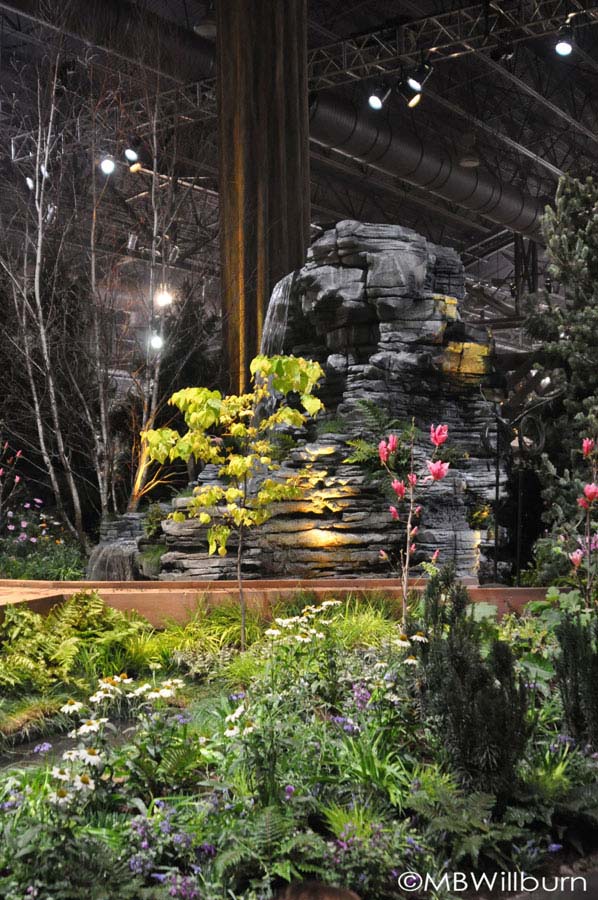 And when all that wow leaves you weary and gasping for ‘a little something,’ there are beer tents and fine wine tastings, and garden tea rooms and cafes.  If you sneak across the street to the culinary marketplace of Reading Terminal, you’ll be spoiled for choice (hint: head for the Thai place with the ridiculously long line – the salmon curry is a miracle).

The Show runs from Saturday, March 5th until Sunday, March 13th at the Philadelphia Convention Center.  If your busy schedule allows it, mid-week is usually the best time to go. And there are numerous tour buses that make the journey through garden clubs and public gardens in the DC Metro area such as Brookside Gardens, Green Spring Gardens, and Benkhe Nurseries.

If every year you’ve been thinking you should make that journey – make it this year.  Perhaps it is your grandmother’s show after all, celebrating with 21st century vibrancy the legacy of a 20th century dream.