The Patience to Wait

The Patience to Wait 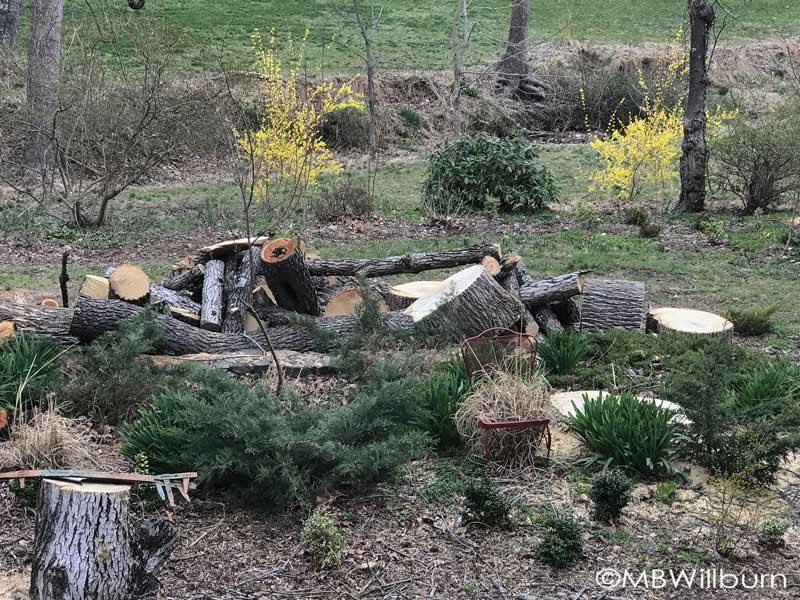 Great gardeners and optimists know that a dead plant represents an opportunity to grow something new. But what of a dead tree? What of five? So much opportunity at one time can cloud a mind already weakened by the fumes of a chainsaw.

It’s probably best then to stifle knee-jerk reactions – particularly the one which argues for immediate replacement. Eye for eye, tree for tree, shade for shade, problems with problems.

Not that I’d replant ash trees in a land ravaged by borer of course. But metasequoia…the luscious thought had occurred.  I’d play up the lodge aspect of the house with a bit of associated redwood, satisfy long-held yearnings for a small grove of this favorite of trees, and score a few points in certain circles.

The thought was indeed luscious; but as I stood contemplating it again this morning, I was struck by another, greater, thought – a sudden awareness of sky.

Sky is good.  Stars are even better.  Why obstruct a new view to the heavens for a redwood thrill? And there is the little matter of the new roof. Or to be more accurate, the new roof twenty years from now, deep in the shadow of more roof-destroying trees.  Yes, a luscious, terrible idea, but fun for a mental fiddle on a Sunday afternoon.

So, smaller trees perhaps. Dogwoods and redbuds are the obvious choice in an Eastern setting, but then so are serviceberry, scarlet buckeye, or white fringetree,  And what of the evergreen touch of an American holly or a well-behaved Southern magnolia?  Do such things even exist?

Sky is good.  Stars are even better.

Right then, no trees at all.  Maybe this is the time instead to encourage those plants that got their start as understory shrubs and will now benefit from increased light levels: the rhododendron, azalea, pieris, boxwood, forsythia and hydrangea. Perhaps one should add even more.

I share these thoughts with you because we all have doubts when designing our gardens, and working around something that once was, but is no longer, is one of the most challenging. I am in the thick of it right now.

The difficulty is getting used to the space as it now presents itself – not as something missing something else.  In this case it is not as if what was was particularly stunning or even attractive, but the absence of it is overwhelming.

Frankly, there’s a whole lot of opportunity to screw up.

>>To plant a grove of metasequoia fifteen yards from a new roof simply because you love them and remember the feeling of coniferous forests from your childhood.

>>To plant a random selection of small trees because they’re small and that’s all the rage and won’t so-and-so be impressed.

>>To encourage smaller shrubs because they’re there, no matter that their existence currently bores the pants off you.

Perhaps then, a better question to be asked of oneself is, “Do I need to do anything at all right now.”  And the answer?

Reaction is not a basis for gardening.  Inspiration is.  Inspiration cannot be forced, and thankfully I don’t have a homeowner paying me by the minute to force some.  It’s my garden and I’m going to wait.

…the roof is replaced

…the deck is rebuilt

…the ceiling is repainted

…the trees are split and stacked

…the world is warmer

…the mind is clearer

And suddenly – perhaps surprisingly – I am inspired.

It may happen in the garden of another.  It may happen as I slurp my soup over the pages of a new book.  It might just happen as I fall asleep at night, dreaming of something else entirely.  But I have no doubt that it will, eventually, happen.

And that, my gardening friends, is an opportunity worth waiting for.