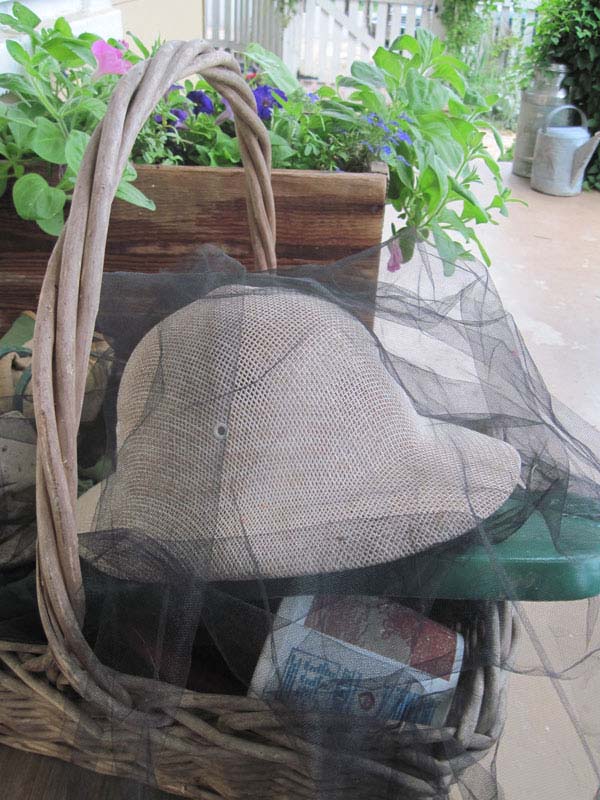 We’re on the Virginia side of the river now, but even so, I have read with interest the heroic efforts of a local Maryland citizen who is determined to eradicate our shared gnat problem by enlisting the big

[spray] guns of the government. I must say, when we moved to this area near the Potomac River fourteen years ago, I would have been thrilled just to hear someone admit that there was a problem in the first place, much less to have them undertake DNA testing of the little offenders to study their movements and plans for lunch.

However, with government, things either happen very slowly, or in the space of ten minutes with a phone and a pen. And as most of our legislators sit in air conditioned offices all day –instead of in the trenches like mere gardeners – I do not have high hopes for an immediate end to our purgatory.

So, this week, a flashback to my solution to the problem from my column many years ago. Ladies and gentlemen – I give you “The Gnat Hat.”

The first morning in our new old house in Brunswick, Maryland, I woke up, sat on the porch and couldn’t see the grass for the swarm of tiny little black gnats that were hovering around my face and neck. I naively put it down to the wet autumn we were having. Yet, come spring and on into summer, the gnats were still there, only worse. I looked at the people around me –amazingly the gnats were not a topic of conversation. Instead, arms mechanically performed a gesture I would come to know well over the next seven years – the “Gnat Swipe”: one hand waving in a slow, robotic fashion in front of one’s face – the other hand occasionally picking a stray wayfarer out of one’s nostrils.

Now, I am no wimp. I have climbed Mt. Kilimanjaro with a smile on my face, braved flying cockroaches in the Caribbean and canoed across a radioactive lake in Norway.   If these gnats were too much for me, I wasn’t going to be the one to say it. So, for seven long years, I tried to be strong instead. I went on outdoor field trips with my children, tears streaming down my face. I sat for hours at soccer games wishing I could watch from the car. I decided to pretend that they really weren’t that bad, that I was “getting used to them”. Let’s face it, it’s hard enough to be a newcomer in a small town without screaming at the top of your lungs “I CAN’T TAKE IT ANY MORE!!!!!!!!” at your kids’ baseball game. 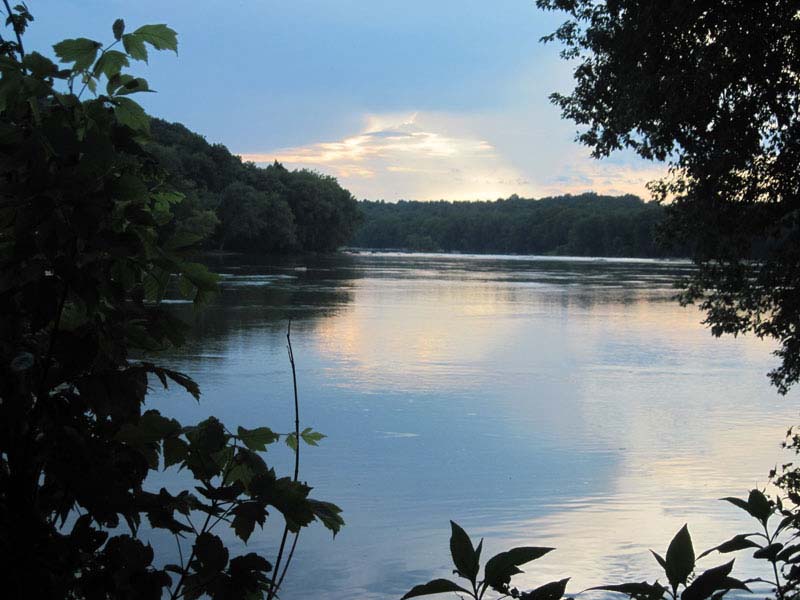 A lovely river, but a breeding ground for black flies (aka ‘gnats’)

Then my mother came out to visit.

My parents live in California. There is not enough green vegetation in that state to attract locusts, much less a swarm of moisture loving gnats. She was traumatized.   She refused to be outside until something could be done about the problem, and I am happy to say, she did it.

Taking an old pith style helmet I had laying around, she found some black tulle I had used to cover the zucchini and cut a yard of it. She put the helmet on, put the tulle over the top of it and tied it behind her neck. Voilá. No more gnats. Netting you could easily see through, with hands free operation. She wouldn’t share, so I grabbed an old visor, grabbed another yard of tulle and made another one.   No sewing required. We weeded in gnat-free bliss together. It gave me such a feeling of satisfaction to see the little beasts crawling on the netting three inches from my face and know they were not getting any further.   It was wonderful. It was like the invention of fire to the caveman. It was the “Gnat Hat”.

I’ve taken a little flak for my fashion statement since. However, the main object of curiosity during a recent tour of my garden was not my lovely rugosa rose nor my blossoming privet, it was my Gnat Hat. How did I make it, how much did it cost, why wasn’t everyone wearing them? I can’t answer the last question. Personally, I would put it down to everyone trying to pretend that the gnats don’t really bother them. And to the hardened Marylander, maybe they don’t. However, I am now brave enough to admit that they sure as hell bother me, and I’m not going to take it anymore.

Now I am not without it in the garden. I am not without it in other people’s gardens either. And, if you see a woman sitting at soccer practice in a long dress and a veiled hat, it’s not the ghost of Eleanor Roosevelt – it’s me.   I am the one smiling in the face of gnat-filled evenings – content to take my time over a conversation with friends in the middle of the field while they bravely swipe away in quiet turmoil.   For a dollar’s worth of tulle, you too can enjoy your garden again. Go on, don’t try to tough it out. Join me, and we’ll revolutionize garden fashion together – one Gnat Hat at a time.