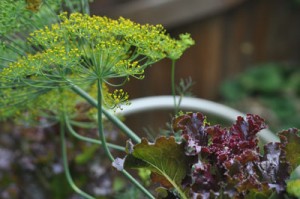 I am struggling in the garden right now.  It would be untruthful to say that I am not, and I find that pretending otherwise only serves to perpetuate magazine myths that make the home gardener feel inadequate and overwhelmed.  There is joy to be had out there, surely; but three conditions exist that dampen my idealism and have me scuttling inside more often than not.  The heat, the humidity, and the mosquitoes.

I live squarely in the middle of the Mid-Atlantic United States.  A curious region where spring promises drenching rains, cool evenings and lush abundance – and then reneges on the deal with searing triple-digit temperatures and humidity levels that make it tricky to draw breath.

Growing up on the West coast, I dealt with similar temperatures every summer, but the air stayed dry, fungal disease remained at bay and no-one was under spring-induced hallucinations that the summer might bring thunderstorms every week to gently water the garden with an obligatory inch.  After twelve years on this coast, I have certainly become more used to the moisture in the air, but I do not relish the feel of tacky sheets and tackier attempts to hide my de-humidifier from view. 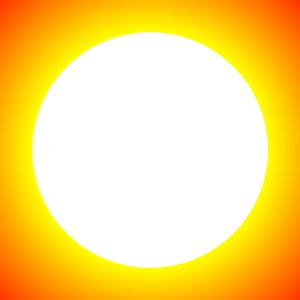 Air-conditioned stores, cars, workplaces, and homes make it even more challenging to step outside – environments calibrated, as they are, by the American motto “Some is good, more is better.”  The irony of wishing for a cardigan while shopping for swim suits is not lost upon me.  Conditioning our inside spaces to a few degrees short of Arctic is not only environmentally un-sound, it makes the idea of getting outside and playing in the dirt a fleeting dream at best.  It’s hard enough to get out there, why make it even more arduous on yourself?

So I keep my house on the warmer side.  I keep my hair clipped up and wear skirts outside – which as the Scots will tell you, keeps a steady breeze conditioning all the right places.  I drink copious amounts of ice water and stiffen my upper lip.  If the hea-midity cannot be cured, it must be endured.

But no amount of stiff-upper-lippedness can mask the itch of a thousand blood suckers infesting the garden in deepest summer.  The mosquitoes are so fierce that the mere thought of going down into the vegetable garden to grab a handful of parsley makes my ankles itch.

Several years ago I was chatting to my mother in California while I weeded out a bed of zinnia.  Very little weeding was actually occurring however, as my hands were far too busy slapping at ankles, forearms and ears. I remarked upon my predicament to my mother who replied with, “Hang on – it’s the middle of the day over there, why are the mosquitoes out?”  Up until that moment, I had forgotten the First Law of Outside Play from my childhood days: mosquitoes are a dawn and dusk phenomenon. 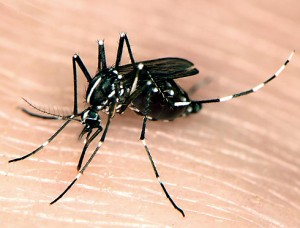 Inspired by my mother’s query I did a bit of research, only to find that the little striped criminals buzzing around my face and drinking my boiling blood by the quart, were in fact, imported, invasive, and completely intolerable Asian tiger mosquitoes (aka ‘forest day mosquitoes’).  No dawn/dusk nonsense for these opportunistic vampires.  If fresh meat was available at 2 pm, why be hindered by outdated treaties between humans and insects?  Moreover, it was unreasonable to be forced to look for a boggy swamp or stagnant pool in which to lay one’s eggs.  A tablespoon or two of water collected in an old tree stump would suffice.

My 6000 square foot garden backs up to an impenetrable woods.  My neighbors are too numerous to count.  It does not matter one iota that I treat my water barrels, up-end my garden saucers and replenish my bird baths on a daily basis.  The flying radius for a tiger mosquito is approximately 200 meters.  Basic arithmetic informs me that the situation will remain grim, and the only thing that makes it tolerable is knowing that much of the world is now dealing with the same problem – even the Italians must slap at bronzed thighs as they chomp their ciabatta.

If you hit me with heat in May, I will not flinch.  If you suffocate me with early spring humidity, I will not falter.  If you set fifty mosquitoes after me on a cool fall morning, I will not perish.  But if you put the three together and ask me to go out and weed the cutting garden, I think I am quite justified in taking my air-conditioned Land Cruiser to the nearest Farmer’s Market.