The Autumn Shuffle: Tips for Overwintering Those Tropicals

The Autumn Shuffle: Tips for Overwintering Those Tropicals

Peering out of the windows of my office, I see the two-story blackened, shredded tips of a hardy banana (Musa basjoo), and I am reminded of the work to be done this week to its less hardy cousins. Is it really that time already? 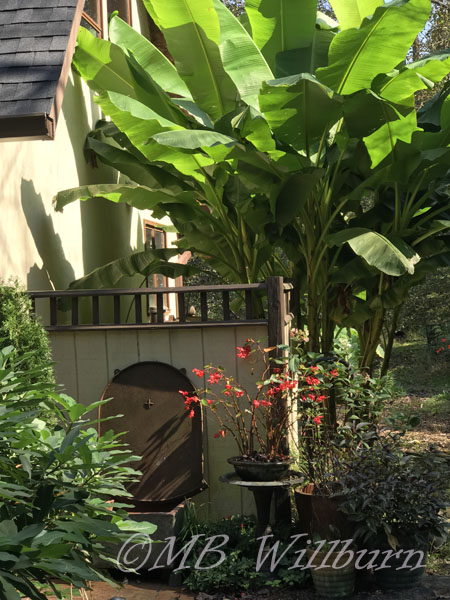 Musa basjoo, the night before frost.

In my weaker moments I would rather sit staring out of the windows that anchor this new, ultra-efficient space – a space created from the former nest of a fully-fledged young man and, according to that young man, evidence of my callousness as a mother. Others keep shrines to their progeny, he tells me.  I move in bookcases and desks.

It appears that 19 years of hot breakfasts and birthday cakes bought me little in the way of indulgence.

Tempus fugit, I told him with a smile.  He won’t feel the impact of those words for a couple decades yet, but I feel them every day, and especially at this time of year as we race the clock to bring in the tender things that still rely upon us and don’t mouth off.

Though the hour has now sounded with Sunday morning’s frost, there is the business of digging and bringing in the tropicals that needed that encouragement to die back, as well as the administrative chaos of finding homes for everything that was hastily pulled into the garage, front hall and dining room – and doing it right.

You may also be dealing with similar digging and shuffling this weekend. I’ve been asked several times on social media this month (@smalltowngardener) about the way I deal with these refugees, so let’s discuss the process.

Many, if not most of the tropicals I grow I do so with the intention of overwintering them with the least amount of work on my part. Of course the absolute least amount of work would be to let them die in place, re-marry a sugar daddy over the winter and buy them all again in the spring with a fat checkbook. 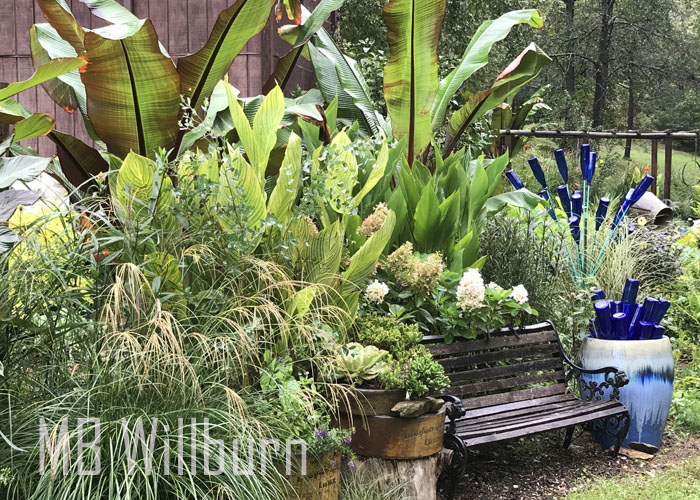 Tropicals enliven the garden and fill space in the late summer when other plants are flagging.

I’ve done too much husband training at this point in my life to seriously consider this option. Instead, I choose tropicals that can be allowed to go dormant in the frost-free and dark environment of my garage (35-40°F).

I simply cannot be bothered to fight spider mite on a 13-foot banana in my front room, and I don’t have enough winter light in my north facing house to keep me out of a S.A.D diagnosis, much less a spindly xanthosoma.  It’s garage or nothing, baby.

After the first frost blackens the leaves of genera such as canna, musa, ensete, colocasia, xanthosoma, alocasia, curcuma and various groups of gingers, it’s time to get out the shovel. Thankfully, most tropicals are shallowly rooted and the effort required is not as exhausting as digging a small tree or shrub. 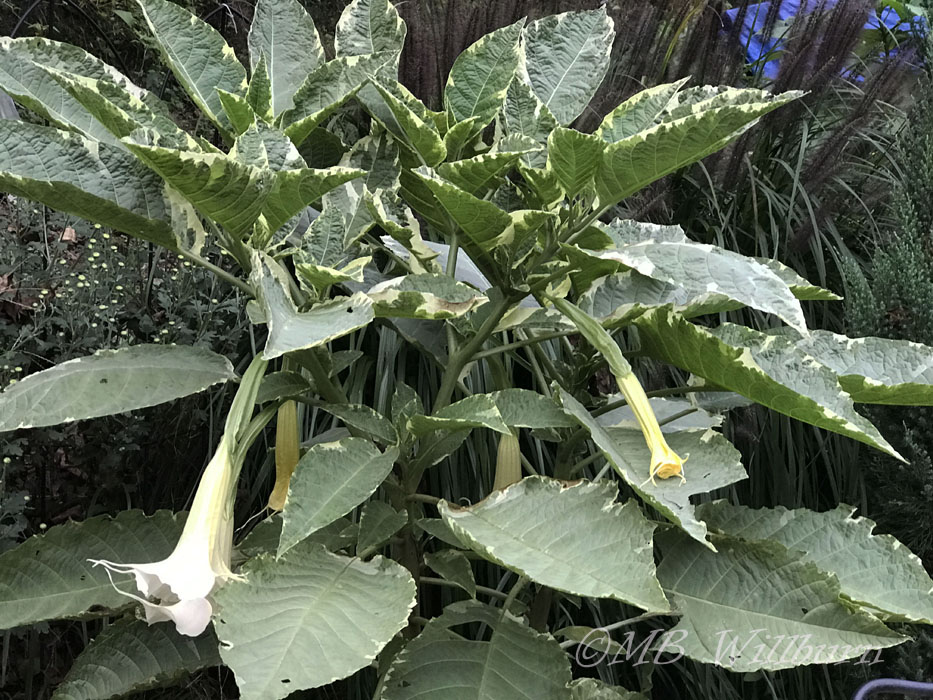 Though it looks pretty burly, this brugmansia comes up with a couple levers of the shovel.

Discussing this process with a friend last night I realized that there are still choices to be made however.  Do you actually want the amount of tropicals you are left with?  Canna in particular spreads vigorously and each clump may be twice the size of the clump you planted last spring. If your back is twinging, consider shaving off the edges of the clump and breaking off the amount of rhizomes you feel comfortable replanting next year. 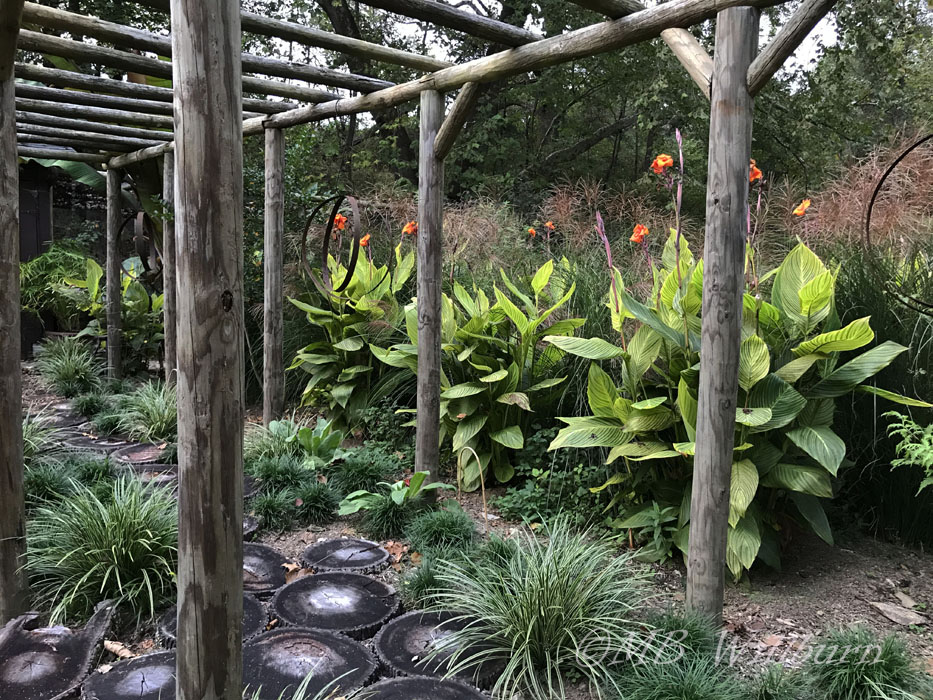 I’ve worked hard to increase my stock of ‘Pretoria’ canna and others – digging ensures I have these accents for next year.

If you have friends who have cast envious glances at your growing collection over the season and made transparent comments regarding their possession, contact them and give them a chance to prove their words were not the stuff of garden small talk.

Once you have figured out what you want and what your friends really didn’t want but would have loved had you dug and delivered them, it’s time to prepare them for storage.  The first step for most genera (with the exception of bananas and some woodier species like brugmansia) is to cut back the foliage to within a few inches of the tubers or root clump.  Bananas (ensete, musa) are divested of all leaves and cut back to the growing point on the stem. Brugmansia and pelargonium are given a short back and sides but allowed to keep some dignity. 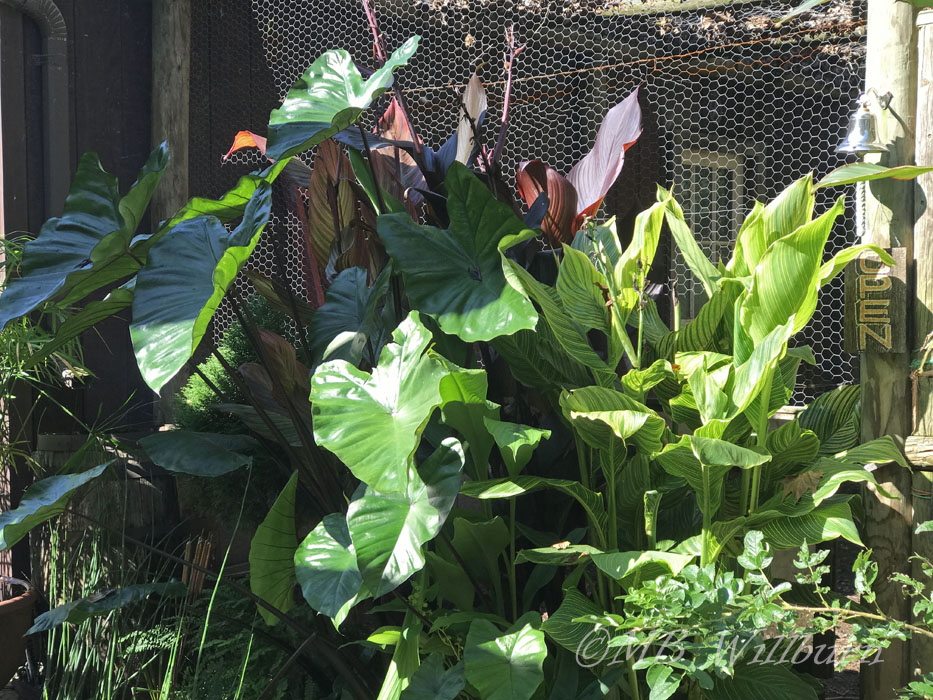 These ‘Black Stem’ colocasia are big enough to handle the garbage bag treatment – the cannas (Tropicanna®) never get a choice.

Overwintering tropicals – what works for me:

Rhizomes are dug, separated, lighted brushed of soil and rotten bits cut out with a sharp knife.  They are allowed to dry for a couple days and then put into a garbage bag with the top lightly tied. The bag is labeled with a sharpie and stacked on an old A/V cart with wheels. 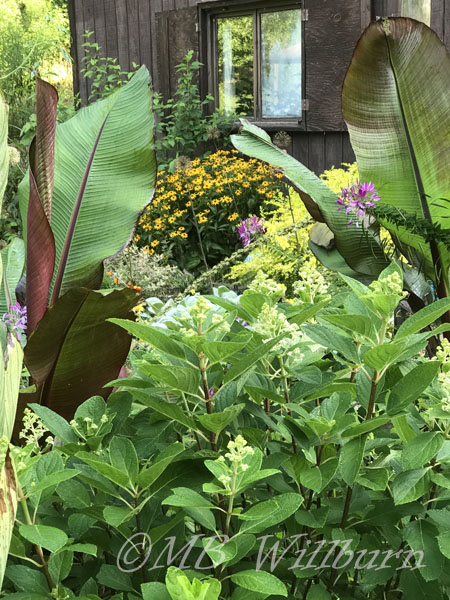 These Abysinnian red bananas (Ensete ventricosum ‘Maurelii’) will be trimmed to their growing points (where the new leaves are being formed), wrapped in burlap and plastic and put into the garage.

Plant is dug and extra soil brushed away from roots. Roots and crown are wrapped with old fabric or burlap to help regulate moisture and then each plant is given its own (labeled) plastic bag.

I have found over the years that bananas do better propped against a vertical surface.  If you lay them on their sides to conserve space, new growth (which happens in response to temperature fluctuations) will head onwards and upwards and create a deformed stem.

I like to go an extra step here and pot up these plants for best survival rates (if not already potted).  They take up a bit more space this way, but I’m much more likely to get them through the winter.

Tubers and corms are dug, soil is removed and they are placed into a plastic tote or pot filled with wood shavings.  Rot can start quickly, so don’t cover with a plastic lid and try not to let them touch.

Caladium can be tricky as they need storage temps around 60°F and few of us keep our garages that warm or our houses that cool.  Sometimes a dresser drawer in the back bedroom your children always complained of will work.

Things to think about whilst overwintering tropicals:

Check on them at least once a month.  You can give them a dribble of water, but mind it’s just a dribble – you are trying to find that sweet spot between rot and desiccation. 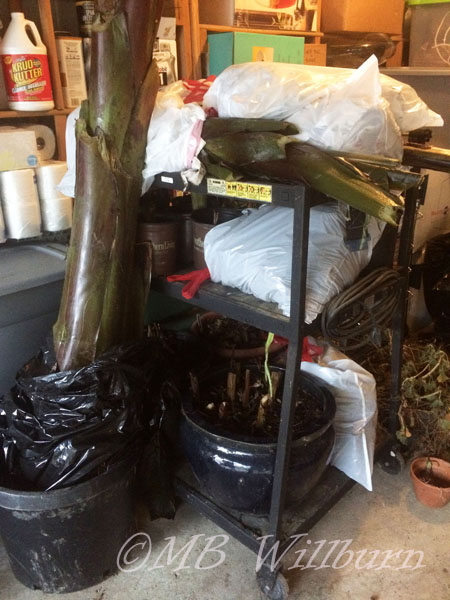 A sad, but organized grouping on an old A/V cart (that’s Audio/Visual for you Millennials) allows me to move it if I need to access items on shelves.

Early sprouting can happen, and usually does as temperatures ‘warm’ in later February. I ignore it unless we have a very warm spell and things begin to seriously sprout – then I will be a bit more generous with the water to support that growth and get them ready to be re-potted and into cold frames.

That said, I have opened bags of cannas (to my shame) in early June with etiolated, ghostly-white growing tips a foot long and had no problem with getting them growing well outside once they’d had a chance to adjust to the light through a shade cloth.

What to do in spring with your overwintered tropicals:

In the early spring if you have use of a cold frame, use it to pot up your tropicals in fresh soil, add water and some slow-release fertilizer, and get them growing strongly for warmer weather and semi-permanent homes in the garden.

If you can’t be bothered, or get distracted with the other rites of spring, simply wait for the last frost, cart them outside and put them directly in the garden or in containers.

Please keep in mind that you must expect a casualty or two.  This is a given and colleagues that regularly dig tropicals every fall do so with the understanding that there will be good years and bad – the good giving you a 90 – 99% chance of success, the bad ending with a 50% loss.  If you can’t take those odds, bring them into the living room and get ready for the mites.

Can’t be bothered with any of it?  Well, a tropical-look garden that doesn’t need to be dug is possible, but is an article for another day. No doubt it will begin with that hardy Musa basjoo that’s currently cluttering up my view with its shabby foliage.

This article originally appeared in The Frederick News Post, and is re-posted with kind permission.