Tell Me O Muse, of Spring

Tell Me O Muse, of Spring 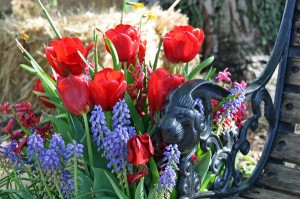 April is National Poetry Month.  It is no wonder. The earth is reawakening in great waves of exuberance. That which appeared to be dead, lives. That which was forgotten is now remembered. How can a poet worth his pen not turn his mind to thoughts of the sublime in April?

Contrast in the garden is at its strongest now. There is still enough bare ground to remind us of the miracle present in fat heads of Iris, or Lunaria at its peak of bloom. The earliest Maples have deftly donned garments of yellow and green – preening as if they were never bare  – yet they stand side-by-side with obstinate Walnuts and recalcitrant Oaks, reminding us of what was and what will be again. Quick! Let it be pressed into our memory before pleasure blocks out all thoughts of pain, and leaves us idly complaining once again of the heat, of the bugs, of the work of summer – a summer for which we pined all winter long.

In a few short weeks June will arrive laden with plenty. We will no longer remember the desperate comfort of duvets round our chins when drafts blew across the floorboards. We will forget the dreariness of evenings beginning in the afternoon. We will stare at a grove of trees and strain to imagine them stripped of leaves; and we will weed and water and sweat and swear and think ourselves crazy that we ever wished such work upon ourselves.

Now that April’s here, we remember. The quiet time is not yet behind us and our senses are heightened by the distinction between seasons. We go to sleep with windows open to the warmth of a breezy night, and wake up with ruddy cheeks and stiff fingers. It is April. Nothing is guaranteed. Robert Frost wholly captured the vagaries of this month in his poem ‘Two Tramps in Mud Time’:

The sun was warm but the wind was chill.
You know how it is with an April day
When the sun is out and the wind is still,
You’re one month on in the middle of May.
But if you so much as dare to speak,
A cloud comes over the sunlit arch,
A wind comes off a frozen peak,
And you’re two months back in the middle of March. 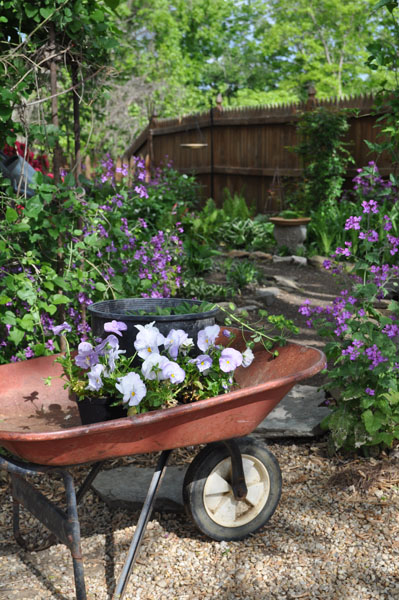 It must be this contrast then, that inspires the Eliots, the Williamses, the Chaucers and the Blakes to write of spring in their various ways. Newly released from winter’s grasp, we are given so many gifts – just not all at once. Some mornings will be snatched away, others granted in fullness. Inspiration is everywhere: there, is Eliot’s cruelty, there, Swinburne’s begotten flowers, and here, in the corner of my very own garden, is Williams’ red wheelbarrow – upon which I depend.

Watching the processes of the garden tick along as if they had never been silenced moves my hand to write a few lines; but I will undoubtedly come up with a mischievous limerick, or an ironic sonnet.  For to plunge into the brambles, into the thorny, the knotty, the impenetrably untidy – that feast of weeds – and say what could not, until then, be said; this is another challenge altogether.  I am not quite up to it.

So I shall let the real poets write what I wish I could and content myself with their words, my inspiration renewed by what renewed them:  the  miraculous reborn from the ordinary by the sounding bell of Spring. 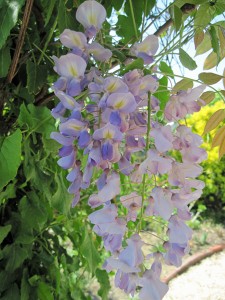 I’ll ignore the impulse to don a black beret and sip expresso and write of my two precious Cardinals who, as if to renew my faith, have once again come to nest in the rambling rose. I’ll look away when a iridescent-blue Gentiana tries to stir my hiding heart into verse. And when a fiery, end-of-day sun shoots gold-vermillion beams into every corner of the sky, I will resist the urge to immortalize them in iambic pentameter – or at the very least, nonsensic versometer.

Even Nash would not approve of such scribblings. But nevertheless I shall give thanks with the dull toil of my hands – and rejoice.