Slow Down, You Move Too Fast

Slow Down, You Move Too Fast

For reasons that are at once both simple and ridiculous, I recently managed to injure my foot in the middle of a four week walking tour of British and French gardens.

Occasionally in this life, the devil seizes the wheel, and one must laugh heartily at the abrupt change of plan or find oneself bested. In my mind the first option was the best – and only – course of action, and so I thanked Providence I had packed exceptionally ugly, but exceptionally roomy tennis shoes, made friends with Mr. Ibruprofen and learned how to say ‘May I have an ice pack?’ in very poor French.  A stout stick was procured from the friend whose late Italian Renaissance cabinet and excellent champagne was responsible for the accident, and mon aventure a commencé. 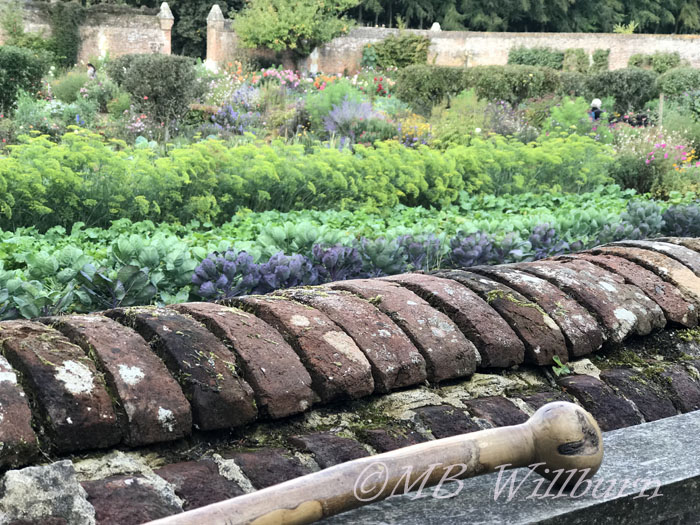 My trusty stick and I overlook the famous walled potager at Château de Miromesnil near Dieppe in Normandy.

The injury was not without consequences however, and some were unfortunate.

For one, the terrible Keatsian ode I idly penned to my throbbing toe in the halls of St. Pancras station whilst waiting for the 16.31 to Paris.  I deleted it shortly after, but not before sending it to a friend who has most likely filed it under ‘B’ for Blackmail. Look for it in the unauthorized biography someday.

Secondly, the act of shepherding absurdly large amounts of luggage through buses and metros and trains and planes with a pronounced limp and rustic stick all the while trying to maintain the persona of a seasoned traveler – cool, calm and collected with a faint whiff of edgy indifference. I failed on both counts. “Marianne’s luggage” will no doubt feature heavily in future stories told by snickering friends and fellow tour-goers.

But there was an unexpected bonus to this hardship, as there is to any hardship if you allow yourself to find it:

I slowed down and smelled the cyclamen. 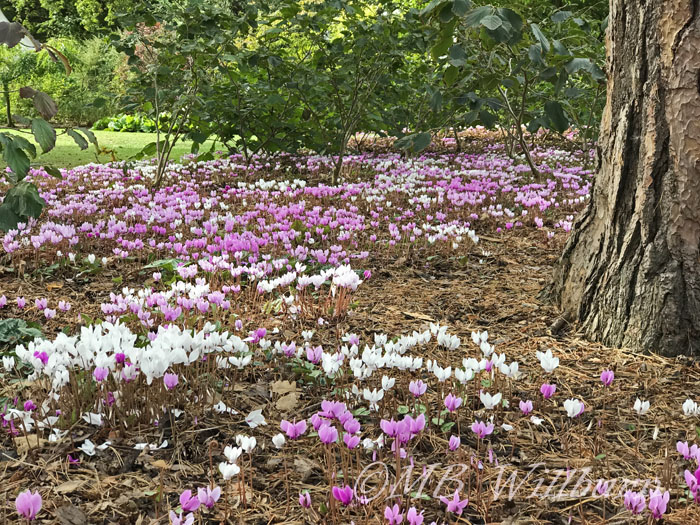 Carpets of violet and white cyclamen bloom under a hamamelis collection at RHS Wisley (Woking, UK).

And the colchicum and the heather and the erigeron.  And many others too numerous to list here. In short, I was forced to take more time to observe the small miracles and the common ones that we tend to ignore in our pursuit of the dramatic and the different.

I could not race past them, nor could I take what I wanted from lectures…from tours…from conversations…and quickly move on.  I had to take what I was given and concentrate upon it. I wasn’t going anywhere in a hurry. 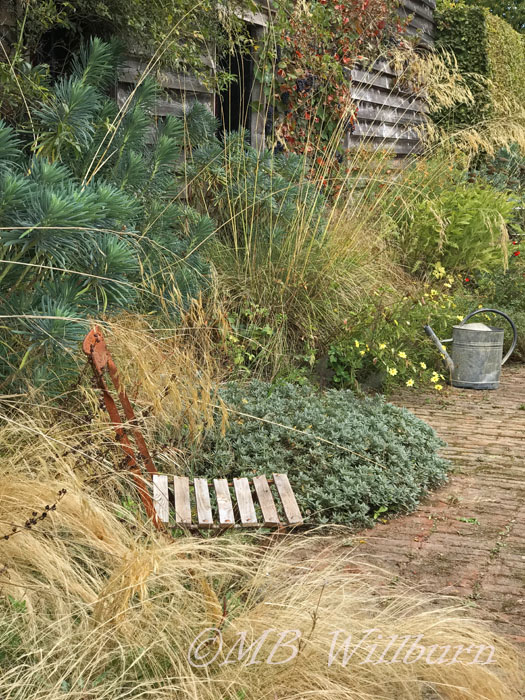 The thoughtful owners at Jardin Plume (nr. Rouen) not only provided this handy seat in a courtyard garden, but a wild and wonderful display to enjoy while using it

When making my way through smaller gardens, I saw patterns in the lawn and realized to my delight it was chamomile.  I noticed the delicate beauty of Erigeron karvinskianus growing out of the smallest cracks in ancient walls; or I took time to experience intimate views from benches placed for visitors who rarely sit.

I am normally one of those visitors.

Traversing large gardens – such as those at RHS Wisley during their annual flower show – I felt empathy for a gardening staff who had put together incredible collections of witchhazels and heathers only to have ten thousand people walk past because they weren’t blooming or weren’t big enough yet.

Such is a gardener’s life and I doubt that hardened horticulturists lose sleep over a common and understandable occurrence, but it is tougher to see crowds bypassing blooming carpets of tiny cyclamen because there must be something better up ahead.

When one is walking deliberately, the cyclamen becomes the main show. And what a show it is.

Larger gardens challenged my endurance, but after slowly shuffling towards a specific feature or area, I justifiably took a great deal of time once there.  From my vantage point on a nearby bench I watched others briefly regard the scene before consulting the map and heading towards the next bucket list feature.  A harsh generalization, and a sneaky observation certainly, but one that played out time after time.

Even sneakier perhaps (however innocent my intent), was the eavesdropping I did on hundreds of conversations-in-passing between others about plants, about how a certain garden touched them…or didn’t. About what they wanted to plant next year or what they would never have in their gardens…and why.  I found it fascinating and illuminating to hear these thoughts – to understand why people react the way they do to specific features and plants – particularly those visitors who didn’t seem to be ‘in the industry.’ 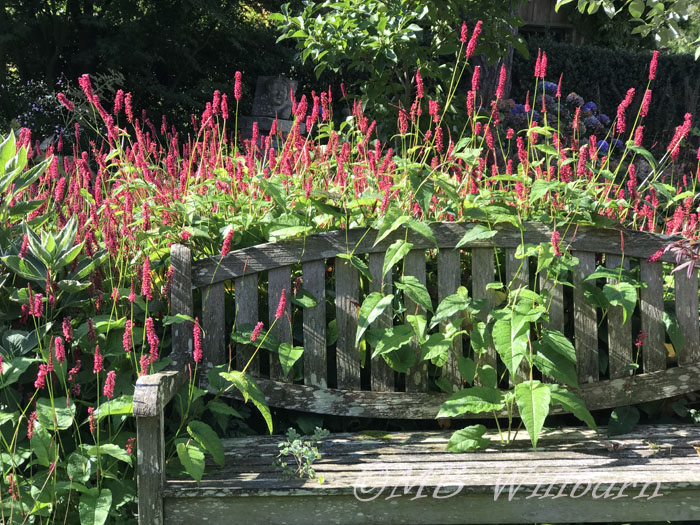 Persicaria amplexicaulis ‘Firetail’ creates art out of a welcoming bench at Jardin de Valérianes near Rouen in Normandy.

Better still were the conversations I had with those slowed down by age, not injury. Those who waited with me for shuttles to parking lots, or shared my deliberate pace along a stretch of colchicum-peppered lawn and found it a perfect opportunity to discuss the merits of single vs. double cultivars as the crowds scuttled by.

And as a consequence of all this quiet shuffling, tricksy spying, and bench lounging, my trip was made immeasurably better.  My doctor might add that three weeks of ‘slow’ was of great benefit to a body that normally takes life at a different pace – a significantly different pace.

I move very quickly as a rule. It is part and parcel of my nature and is, ironically, the reason I found myself with a broken toe after simply heading upstairs to find a book.  Slowing down is hard for me and I often train myself in the art of the thing by foraging for mushrooms, or attending yin yoga, or listening to two hours of  Handel’s Jephtha on full volume with the distractions of phone and laptop several rooms away.

High-speed multi-tasking carries me through this life, and as wife and mother, weaves magic through the lives of others. It is a magnificent curse and one which I do not easily break. Thus the mirror must be cracked for me.

I am immensely thankful for the little toe that cracked it.  May the lessons learned on this trip stay with me as I get reacquainted with my own garden – one deliciously slow step at a time. 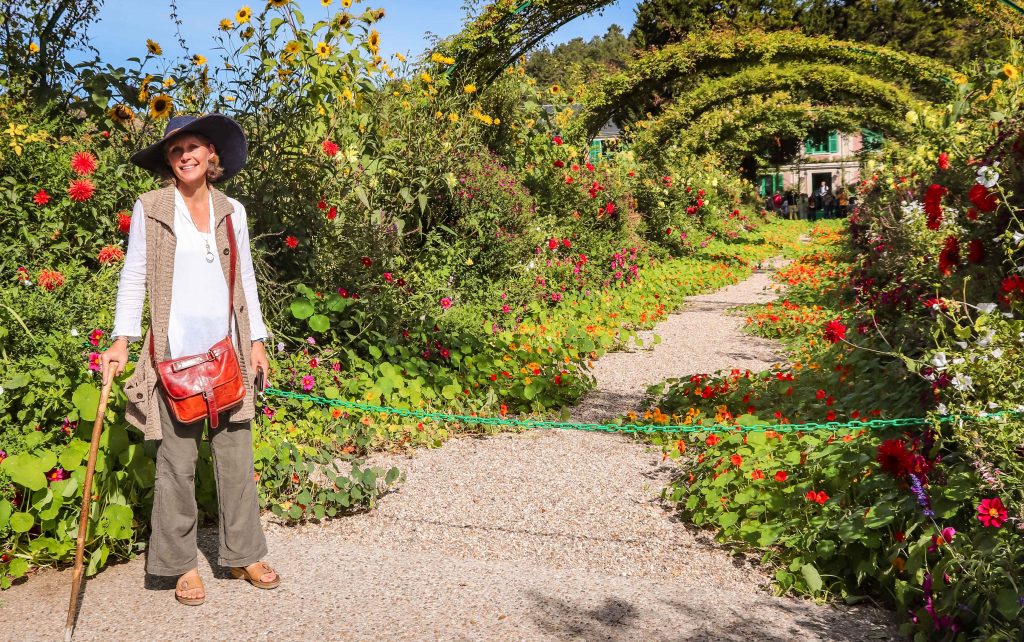 Nearing the end of the trip at Giverny, I was able to wear a pair of sandals, but I didn’t let go of that stick for another two weeks. (Photo credit: C. Mullet, Carex Tours)

Can’t wait for the stories about more of the gardens I visited throughout Great Britain and France?  I invite you to take a sneak peak on my Instagram account @smalltowngardener or my Facebook page at The Small Town Gardener.

This article originally appeared in The Frederick News Post and is reprinted here with kind permission.