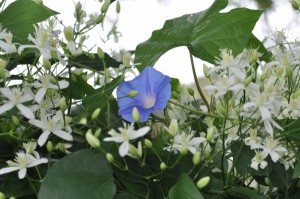 Every once and awhile, and contrary to the best laid plans of mice and men, the garden decides to take matters into its own hands and do some planting without the express permission of the resident gardener.

We are quick to pull out the dandelions and purslane (though both are edible), and it’s obvious that there is only one thing to do with the burdock; but what do we do when we are faced with the offspring of a prized (or even not-so-prized) plant?  Are you the type who pulls first and asks questions later, or will you take a minute and examine what nature has given you?  As long as you keep the big picture in mind, you may find the second option far more entertaining – and often quite charming indeed.

As long as I have gardened at my current home, I have pulled up Virginia creeper (Parthenocissus quinquefolia) by the handful.  Seeds scattered by fattened birds in the fall are quick to germinate and quicker to wrap themselves around the stems of plants otherwise minding their own business.  Let a seedling go and before you know it you have chaos on your hands – especially if it gets itself entwined in a large hedge of privet or euonymus.

But Virginia does not only creep, she also climbs – and what’s more, she blushes a beautiful crimson red in the fall just before undressing for the season.  This eastern native beauty is grown in Europe as a prized ornamental; and at several Euros a pop, she clothes buildings and outbuildings skillfully and rampantly, much like Boston ivy (P. tricuspidata) does for our northern neighbors.

So, when I noticed one day that she’d placed herself up against a particularly boring windowless section of my north wall  – I decided to let her have her wicked way and stayed my weeder’s hand.  It’s been four years and she has achieved that which she set out to do, without any planning input from me.  Ironically, a purchased and planted Hydrangea petiolaris nearby is taking far longer to achieve the same goal. 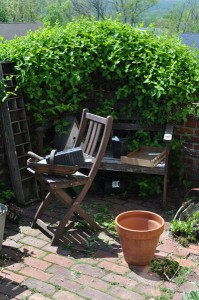 At the edge of my potting area, a common honeysuckle (Lonicera japonica) decided to put down roots in the space between patio bricks – completely covering the corner of a newly mortared wall.  Though the plant snobs will snigger, I couldn’t have wished for finer raiment.  Not only does this vine create a bit of evergreen color in a difficult space, I am blessed with a full season of heady perfume in the air, hours of enjoyment for children enraptured by honey-filled flowers, and a fine screen against houses below.  Again – not my plan, but I surely benefitted.

Ditto a couple bronze fennel seedlings that have become majestic plants in the vegetable garden, and the brilliant California poppies that sit sweetly at their feet.  Neither of these were choices I made, but rather, choices that the garden made for me.  I can list many of these serendipitous seedings – just as I can list many more that, after examination, didn’t make the cut. 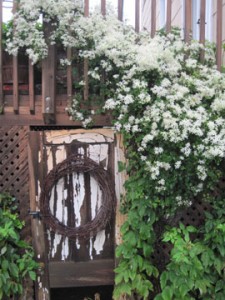 Had I pulled out a Clematis terniflora seedling three years ago from under a downspout, instead of watching it make its way up the deck and through the railings, I would not be able to enjoy the beauty and scent of flowers fifteen feet up in the air on a chilly September evening.  However, had I let one of its cousins live in the sunny border, I would have lost numerous plants to its suffocating embrace.

If you are faced with something you didn’t plan, don’t be too quick to sign its death warrant.  The souls of our gardens are often hidden in these little gifts from Mother Nature.  When it is only ourselves in charge, our gardens might appear neat as a pin, but lacking that certain charm that separates the good from the great.

Just keep a pair of pruners and a spade at the ready – as Mother Nature’s plans can go oft awry just as frequently as our own.