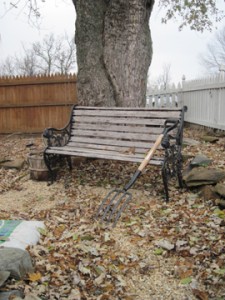 We’ve been gone some time visiting family in warmer climes.  While we were chasing the last of the summer sun in California, back home in Maryland fall turned into winter, Halloween turned into Christmas, and my garden turned into a sea of browning, crumbling leaves.

I have two children and I know how to use them.  However, this time there seemed to be a small communication problem….insofar as they were both communicating a great deal and not doing much in the way of actual raking.

Sadly for them, resistance is futile – as evidenced by this transcript of our recent conversation:

I am not trying to punish you.

If you were being punished, there would be far more pain involved.  Look at the sky – it’s blue!  Look at the sun – it’s shining!  It’s the middle of December and you do not have to wear a Michelin Man outfit.  If anything, I am rewarding you with good, honest work in the garden; making you stronger, fitter, and bursting with character.  Rake!

It is not my tree.

I did not pick it.  I did not plant it.  I was not guilty of deluding myself that a fifty foot Silver Maple was a good choice in a tiny front yard.  I was not even alive when this heinous horticultural act was committed.   It came with the house; and for that matter, if you want to talk “ownership” of this tree – here’s the number for Wells Fargo.

And let’s not forget, child of my heart, that you are the only one who actually uses this tree in any meaningful way.  You climb on it, you swing from it, and in the summertime you use its massive bulk as a shield in water balloon wars.  I’m just the shmuck who tries to stop it killing my plants.  Rake!

Your rake will not work if you use it improperly.

I know a child of your generation might have a difficult time understanding this concept; but a leaf rake does not come equipped with a two cylinder engine.  It is not automatically propelled.  It must be pushed and pulled by its user in a purposeful manner which will eventually result in a small pile of leaves being formed. There is no app for that.  Rake!

There is more to raking leaves than raking.

Once you have raked the leaves, they must be put somewhere.  It does no good whatsoever to make the world’s tallest pile of leaves and then slink away.  If you do so, one of three things will happen:  a) we will have a wind storm tonight that breaks North American records; b) children that we have never seen before will find this pile and merrily re-distribute it all over the garden; or, c) it will be rained upon…and snowed upon….and various feral cats will use it as a litter box for the next five months; and you will think that I have forgotten that you never finished your chore.

But when the spring comes….when you least expect it….when you’re about to go biking, or swimming, or kayaking or gaming….. there I will stand with rake in hand and a smile on my face. Except this time it will be the heavy duty rake – because a leaf rake can’t begin to handle that kind of crazy, mucky, slimy, stinky mess.  And then, then my child, you’ll wish you’d listened to your aged mother on a crisp winter’s day.  Rake!

Yes, you may feel sore after a few hours.

Consider yourself lucky.  Your father and I feel sore after a few minutes.  Rake!

Do not bring up Christmas vacation.

There is nothing more irritating than a well-fed, well-dressed and well-housed teenager using the Christmas season as an excuse to laze around on his well-nourished bottom while his parents race around in paroxysms of Christmas frenzy.  Not in my house.  Not on my watch.  Rake!

And for Heaven’s sake, don’t argue.

You’d think, after thirteen years on this planet with me as a parent, you’d understand that you are getting nowhere fast.  There isn’t an argument I cannot best, there isn’t a premise I cannot dissolve.  Had you been taught logic in school you might have had a chance.  As it is, your words are useless against the iron wit that is your mother.  Rake!

Oh, and if you need me, I’ll be inside, next to the fire, researching boarding schools in Canada – they have more maples than people up there.