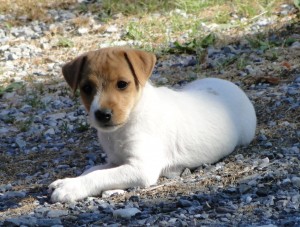 It’s 5:11 am. I am standing in the garden watching the ligustrum shiver as a tiny white bullet passes through the undergrowth and flattens the remains of the iris. Rosy-fingered Dawn is still somewhere over the Atlantic Ocean, leaving my pajama-clad frame illuminated solely by the yellow rays of an iron porch lamp. The warm nights have given way to cooler mornings, but I am not weeding. I am not even waking. I am waiting. The seed heads on the Northern sea oats now quake indignantly and I glance at my watch and sigh. Just one morning amongst many in my new role as puppy mother and sleep-deprived masochist.

It is not only me that suffers. My older Labrador, certain of dominance in a one-dog household for over six years, sees his quiet life threatened beyond endurance. Forced to share a water bowl with a cheeky little upstart, his peaceful mornings are interrupted by raucous play, his lazy evenings are now spent guarding his favorite bone from the stratagems and spoils of a Jack Russell Terrorist. We are all learning to adapt.

I’ve had a few words to say about pets and gardens over the years. No matter how idealized the picture in your head of a contented tabby sitting peacefully on a bench, or a faithful dog gently trailing you as you dead-head a sea of rudbeckia, the day-to-day reality involves dead birds, trampled plants and possibly a tranquilizer prescription. Chain yourself to a puppy and that scenario takes on greater implications – house training, sleepless nights, nibbled slippers…in short, constant surveillance.

There are two full years to get through, as any dog owner will tell you. And faced with the horrendous task ahead, you may take the easy way out, closeting the little monster and yourself in your slate floor kitchen with a bag of treats and a roll of paper towels.

However, the braver among us refuse to be shackled by the demands of puppy ownership and insist on conducting life as usual. In my case, that means life as a gardener, introducing Master Dog to a veritable wonderland of sights, smells and long-forgotten treasures.

In a fully-fenced yard, it is easy to believe that a puppy can’t get into too much trouble, but turn your attention away for a few minutes to throw a couple of pots in the basement, or go hunt out that bag of vermiculite you squirreled away last autumn, and you may find him bottoms-up in a groundhog hole, or nosing a gate open, or making a latrine of your new heuchera.

Still, the romantic moments do exist here and there and some of us feel that, however fleeting, those moments are worth the price of a little disorder. Yesterday morning I pulled out a withered bronze euphorbia that had skipped bronze and gone straight to brown. Sitting back on my haunches to contemplate the empty space, I was entertained by my new terrier scenting dirt like a shark scents blood – his entire body launched into the hole, frantically and efficiently digging. This instinct will drive me to the drinks cabinet eventually, but in the interim, I directed him toward a hole I’d started for a golden berberis. A few minutes later, all was excavated and we were both supremely happy.

His parents are groundhog killers by trade, but I dare not let him nose the holes that appear under the slats of my fence, lest he follow them out of my small garden and into those of my neighbors, who have fingers poised righteously over phones set to speed dial Animal Control. Instead, we take long walks down by the river, where he can follow a thousand scents and we can both dream of the day when we sell one of the children and buy that perfect home in the country.

It will not be an easy road. There will be tears. There will be vile acts of unspeakable destruction that involve treasured plants, chairs and Wellington boots. But as my little companion trots by my side in the early evening, and lies down to watch me pot up a tender Mandevilla, I am reminded that there are many things in life that bring us joy that aren’t particularly well-advised…such as buying a half-price Zone 10 plant one month before the end of a Zone 7 season.  A glutton for punishment you say? Quite possibly. I am a gardener after all.