A Place for Peace – A Garden Restored

A Place for Peace – A Garden Restored 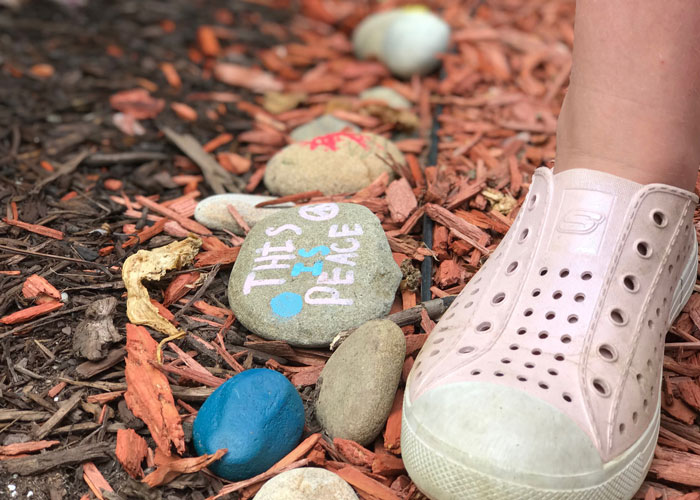 As a rule, young girls do not tend to frequent my lectures on gardening.  For one, they are about gardening.  And, as my heretical 16-year old daughter takes great pains to point out when she is not within arm’s reach, young girls have many distractions in this life, and listening to someone talk about growing things is distinctly middle-aged.

She is brave, that one.

Nonetheless, at a talk in early March, I found myself staring at a fresh young face in the front row, seemingly paying rapt attention – and she couldn’t have been over 10 years old.

Keira Farrell was with her mother Kristine, and they had come that day with a purpose:  They were renovating a small school garden at Carroll Creek Montessori Public Charter School in Frederick, and they had absolutely no idea where to start.

This garden was a little different than the traditional school gardens which Montessori Schools create as a matter of curriculum.  It was a Peace Garden – a garden dedicated to the memory of a student, Sophie Lillard, and her younger sister Madigan, who six years before had died tragically in a house fire.  Their deaths had hit the school and the surrounding community particularly hard, and in addition to fundraising for a larger-scale playground project, a small garden was created in their memory at that time.

School gardens, as any coordinator can attest, are particularly challenging. Students and teachers bring energy and excitement to such projects during the winter and spring months, but when the bell rings for the last time in early June and the students are released to summer joys, the true demands of that garden are yet to come. With volunteers in short supply, many gardens become weedy and overgrown.

This is precisely what had happened to this little garden, and Keira and five other Junior Girl Scouts of Troop 81151 were determined to put that right…