Just over a year ago at the end of a particularly brutal winter, I made a Scandinurbian sojourn to the holy halls of IKEA to buy some bookcases to line an office wall.  On my way out, weakened by meatballs and lignonberry juice, I fell prey to one of the dirtiest Swedish marketing tricks to cross the North Sea – a beautiful stand of Phalaenopsis Orchids with tiny price tags begging for homes. 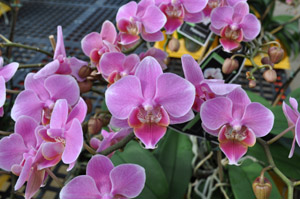 I have walked away from Orchids before.    I know what happens to the unsuspecting plant lover when this fatal beauty comes knocking at the greenhouse door.  Heartbreak.  Misery. Good money thrown away on pebble trays and sphagnum moss.  Orchids were all well and good in a botanical garden under glass, tended by graduate students and misted with pure Amazonian water every ten minutes – but in my seventeen percent humidity house in the dead of winter?  I was not even slightly interested at the mere idea of entertaining the smallest shred of the tiniest possibility.  Give me a strong summer Leucanthemum or winter’s hardy Hellebore.  Believe me, this home and garden is no place for nature’s fragile flowers (literal or otherwise).

Yet March is a cruel month in Maryland.  Just as you think you might be touching the hem of spring, a freezing rain coats the plum tree in an inch of icy glass, and you have to put away your dreams for another three weeks.  I was weak.  The Orchid was exquisite.  The price was right.

And then, like a particularly successful arranged marriage, I fell in love. 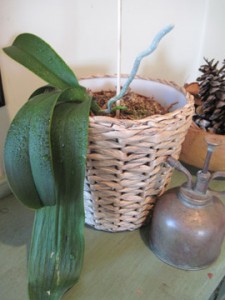 It had a lot to do with the length of bloom – Six weeks if a day.  I couldn’t believe it, hour after day after week of strong, succulent bloom.  I was so enchanted I even bought him a wedding present in the form of a bronze water mister.  And then when blossoms finally faded, I clipped back the stem and prepared the death certificate – for whom but an expert can keep an orchid alive?  But my little Phal continued to grow.

I never expected he’d survive sitting next to my writing desk in the low-lit living room – but it was all I could offer him at the time.  I suppose I just got lucky, because he started putting up what I thought to be new flower stalks.  They were a bit whitish, and a little twisted looking, but beggars can’t be choosers – I tied them up and watched expectantly.

Then I met an Orchid Specialist for the Smithsonian Greenhouses at a party.  Turned out my flower stems were aerial roots.  I don’t like to make mistakes this egregious, and I sure don’t like to admit them, but hey, it’s an orchid.  Ignorance is pretty common. I sheepishly untied the roots from their vertical imprisonment when I got home and apologized profusely.

It also turned out that I had accidently given this lucky plant just the growing conditions he needed – low light and a nighttime dip in temperature (I tend to keep this room cold) to stimulate a new flower spike.

Now, said my new friend Tom-the-Orchid-Man, I just needed to encourage what seemed to be the beginnings of an inflorescence (orchid-talk for flowering spike if you’re ever at a party) by bringing the temperature up a little and keeping the humidity high.

And that’s precisely what I am doing:  playing slave girl to an orchid taskmaster while my philodendron weeps from neglect in the back room.  And, to my complete and utter dismay, I’m enjoying every minute of it. 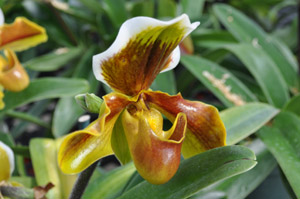 Orchids can be difficult, granted.  But a Phalaenopsis is about as easy as you can get in the orchid world – an epiphytic orchid that grows anchored into the bark of a host plant in the wild.  If the stars align, and my beloved Phal sports a homemade inflorescence in the next month, perhaps I will graduate to a Paphiopedilum (the Lady Slipper orchid) in a few weeks’ time…

…and buy a graveled tray

…and join The American Orchid Society

…and build a conservatory onto the back of my house

…and get a second job to support my orchid fetish.

That’s the last time I visit IKEA in the dead of winter.  Those Swedes have a great deal to answer for.