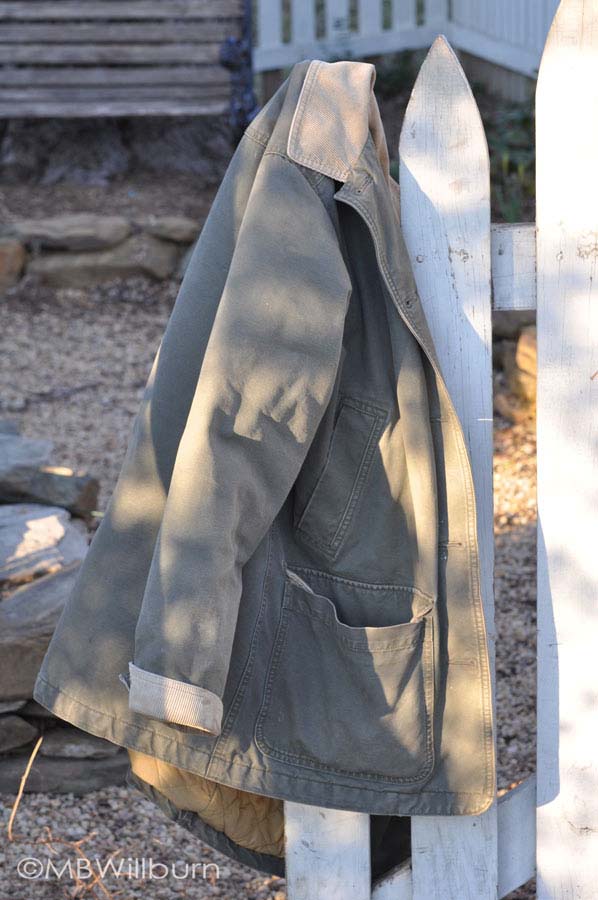 Have you been walking through your garden? I hope so. At this time of year we are as clearheaded as we will ever be. Winter may not afford us congenial temperatures, but what it lacks in warmth, it more than makes up for in perspective. Any issues due to poor spacing stand naked before the winter gardener clutching a notepad and a pencil.

We will not be beguiled by sweet blossom to ignore flagrant thuggery. Even if the offender is evergreen, its beauty is contracted, it’s power, lessened. It would be a shame to lose such an advantage just because we can’t be bothered to find a warm coat.

The feathery remnants of miscanthus “Morning Light” made it easy this morning, reminding me of a September romance with the mums that was made in Heaven. So the privet will depart – perhaps even to a friend’s garden. Note made. Shrub tagged. On to the next. 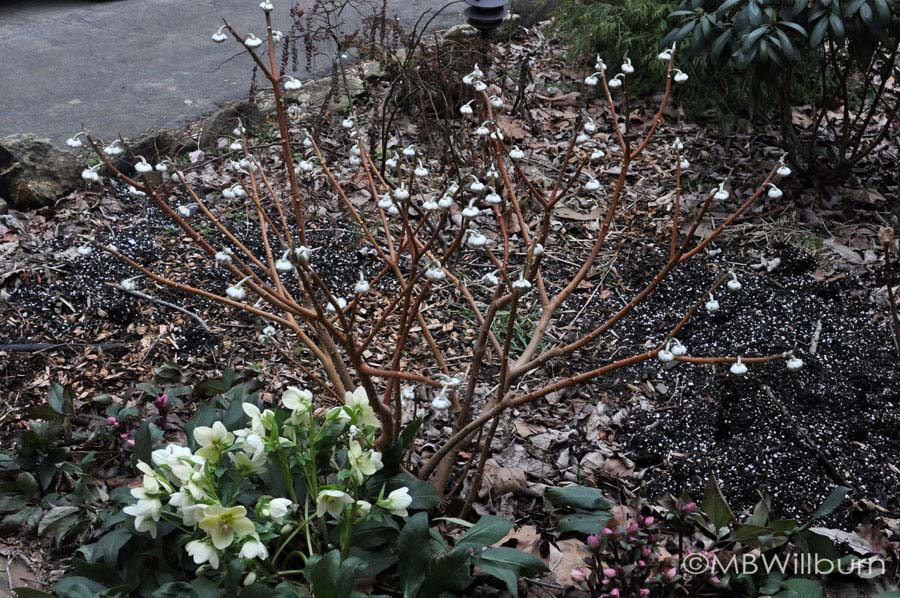 The spacing between Hydrangea paniculata “Pinky Winky” and my Snow Cream edgeworthia needs some attention – as well as the spacing of the latter against the pathway to the house. If I can finally let myself believe (against all naysayers) that it will live, and not only live, but thrive, I believe I am ready to move it with confidence to a spot ever-so-slightly less sheltered so it can spread it’s limbs into the ten foot monster it’s destined to be. Right now, it’s still a demure three foot mass of silky buds at the ends of caramel brown stems. What a stunner. 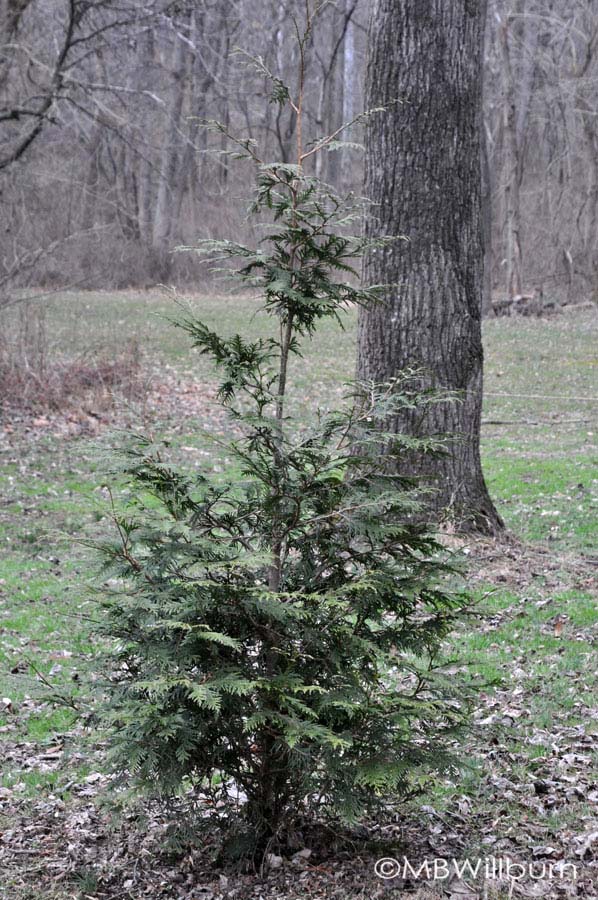 Green Giant Western red cedar makes an excellent specimen tree or screen – but NOT next to a house (and not in the early years!)

Always one to ignore the beam in my own eye for the speck in my neighbor’s, I have not endeared myself to two separate homeowners who neither asked for my opinion, nor seemed pleased to receive it. Yet both were on the verge of horticultural Armageddon, having planted the fast growing Thuja “Green Giant” outside their front windows as a “cute” pyramidal evergreen. Another victory for the Big Boxes with their rows of completely inappropriate “winter interest.”

One, there is nothing cute about a pre-pubescent Green Giant. They are awkward growers that for several years shoot up, not out (a bit like my teenage son). Two, fifty feet doesn’t warrant a pruning saw, but an equity loan when you have to have it professionally removed.

Yet, we are all guilty of silly mistakes, as I intimated earlier. Turned on by beautiful golden evergreen foliage, I similarly planted three Daniellow arborvitae along the path to the back door. They brought out the gold in the moss between the flagstones and gave a bit of gravitas to a pathway otherwise lost. After three months, I still can’t hold my head up when a gardening friend asks why I ignored the “8-14 feet” on their tags. I usually mumble something about it being late autumn and moving fast, but it’s a weak excuse and I know it. 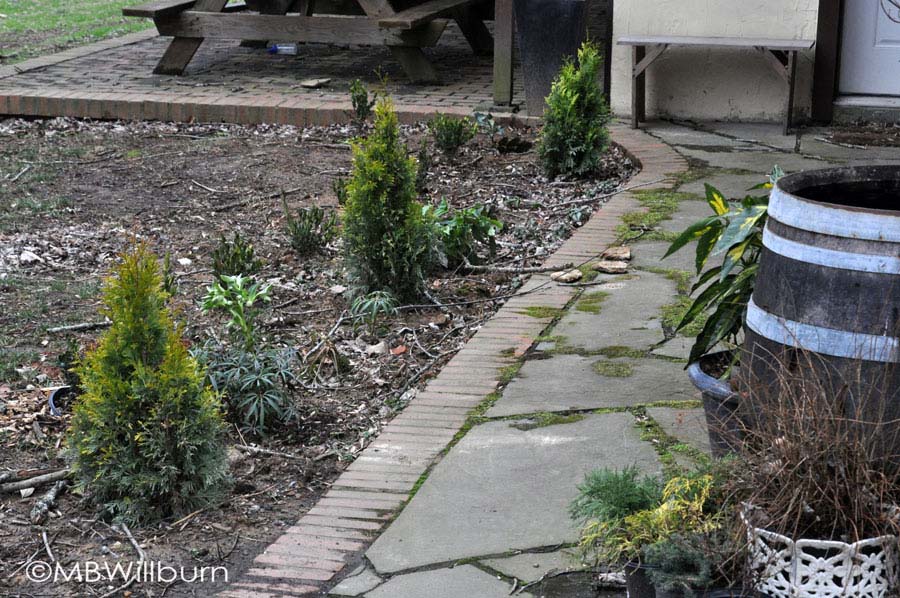 Bad idea. I knew it the moment I started digging the holes. But I still kept digging. Now I’m going to have to dig three more.

The entrance to the driveway will make a far more respectable home this spring, restoring my credibility and adding a bit of golden snap, crackle, and pop to the deer’s breakfasts in the mornings. In the meantime I’ll enjoy that color for the winter, right within range of my husband’s 30-aught-6.

Getting the idea? Confess your sins and schedule your penance. Now is the time. Not only can you see clearly, you don’t have to do much more than scribble down suggestions in a journal then go inside for a cup of tea and an aimless sort through your seed packets. Spring will be bad of course. But then, it’s the best kind of bad, isn’t it?