New Trick for an Old Gardener: Planning and Designing EXACTLY what I want.

New Trick for an Old Gardener: Planning and Designing EXACTLY what I want.

Last weekend I started the process of becoming professionally serious about a small area west of my fenced kitchen garden. It’s functioned as a mini-wildflower meadow (and then general eyesore) for the last four or so years.  With the advice and help of the talented horticulturist, designer and author Gregg Tepper, I’m diving into the heretofore unknown-to-me world of specifically planning a medium-ish bed for specific perennials, for specific reasons, for a specific season, for a very specific result.

Why are such things unknown to me?  Well, for the long answer I’d send you to my first book Big Dreams, Small Garden (2017) – a book about working within limited resources to create a beautiful and functional garden – particularly in a small space. (I see that Amazon has just discounted it to a price that I can’t even get from my own publisher. And that should tell you all you need to know about how lucrative it is to be an author in the digital age.) 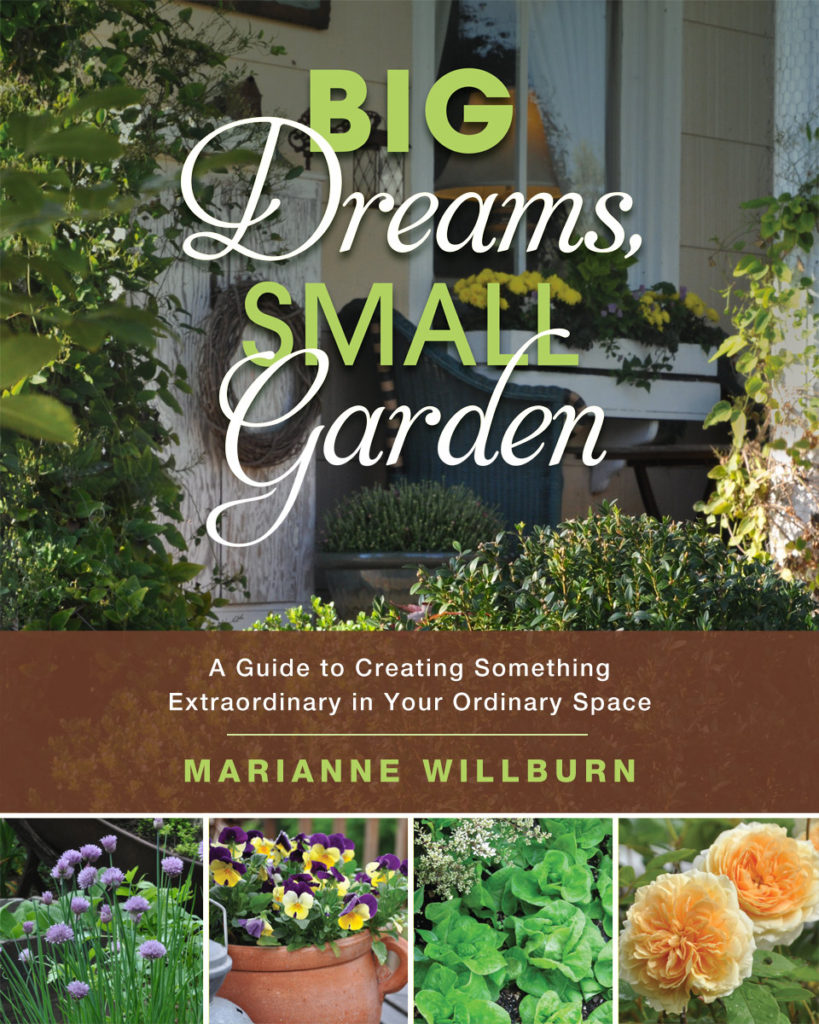 I am deeply committed to this philosophy, and for the 25+ years of my gardening life I have followed it, motivated by financial necessity and inspired by the intense satisfaction that comes from creating something beautiful from virtually nothing.

Here are several of its tenets:

• Carefully observing other gardens and principles of design, and utilizing some of those elements in my own space.

• Joining plant clubs, organizations, societies, etc.. to meet and mix with other gardeners and learn from them.

• Not ordering all of the plants that excite me, but instead finding cuttings, seeds or divisions of them off of friends, and raising them over several years.

• Not setting out a plan that uses masses of particular species (much less cultivars) to create an effect (unless I have propagated them myself and have plenty).

• Finding rhyme, reason, and placement for the odd plant that comes into my life via a trial box or a friend.

• Having a working relationship with the guy who oversees the clearance racks at Lowes.

• Attending every plant swap or exchange I can make time for.

• Gradually developing a plan for the garden based on resources.

When we moved to a larger property in 2013 after years of being intensely frugal, the same principles applied — as we put everything we had at buying the property, with little left over for painting bedrooms, much less landscaping.

So I Just Skipped All That. What’s the Short Answer?

Because I want to see what the alternative feels like for the very first time in my gardening life.

So, You’re Finally Selling Out Then?

Absolutely not.  My garden is evidence of all of the above (and I’m sure there are those out there who just mumbled “yes, we can tell” under their breath). But I would be flat out, bald-faced lying if I said that I don’t see value in many of the things [above] that I do not do, and have not been able to do, out of necessity. 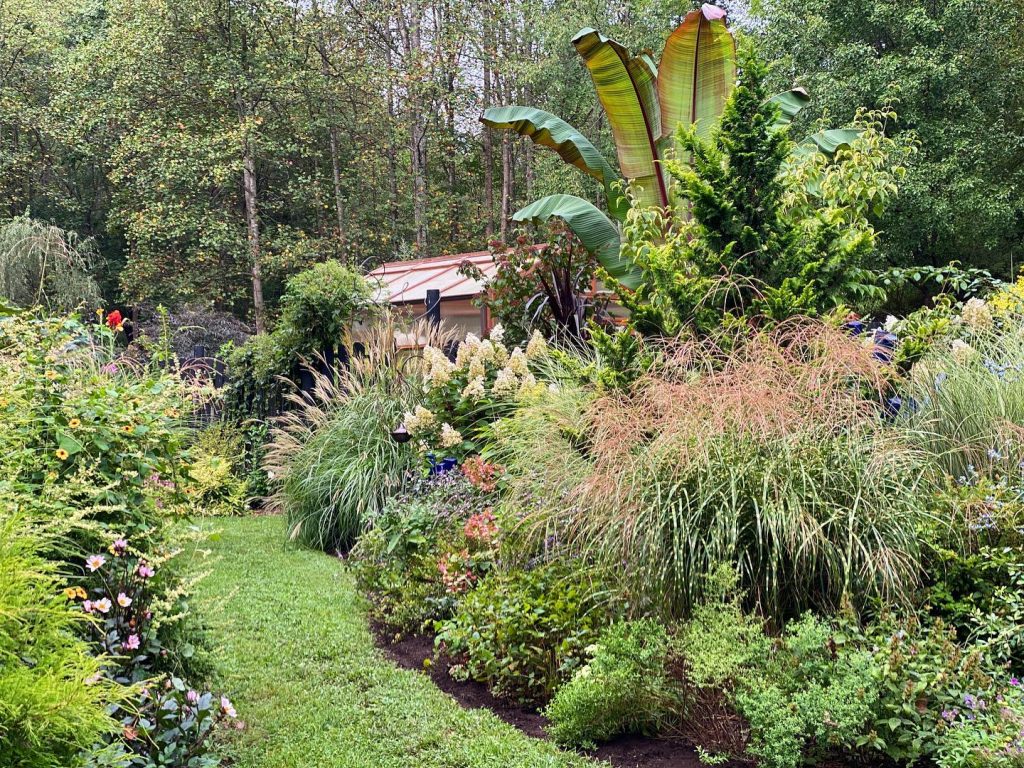 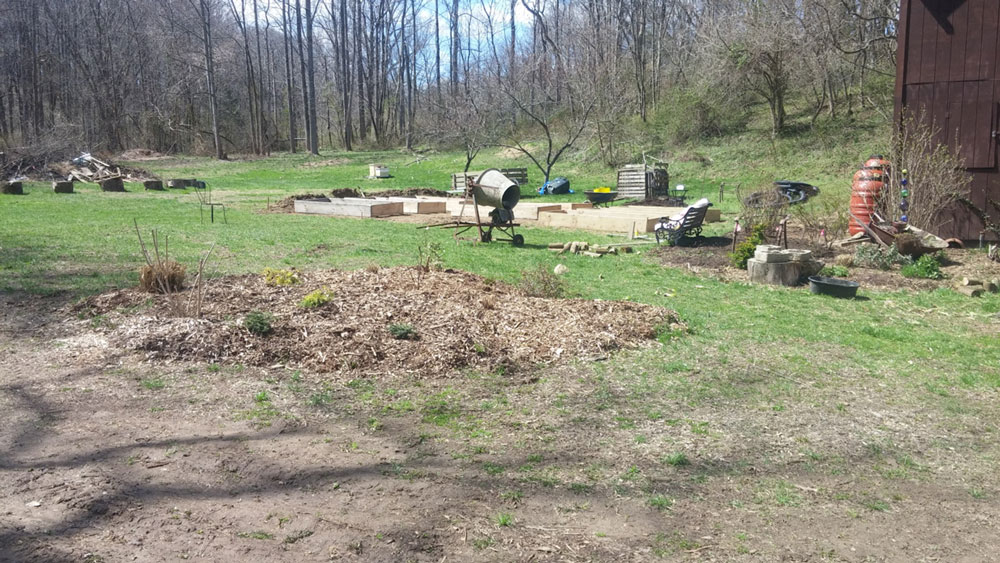 Here’s that view 6 years earlier in March of 2016 – and I remember being ECSTATIC that I actually had something planted and built in that field, previously just grass.

So You’re Saying There’s No Need for Designers & Landscapers Then?

For gardeners (and I use that term with precision, and in opposition to the regrettably apt term “consumers”) the ability to hire a competent and creative designer or landscape architect is an incredible gift. It can be the beginning of a relationship that not only expands one’s own garden, but the conversation around, and evolution within, garden design itself.

And the ability to buy and plant EXACTLY the plants you want, to create the effect you desire, is an absolutely intoxicating thought.

Took me by surprise a little early this year. Pink

There will always be ‘dumb questions’. How the

Coming home to paper whites in bloom and kept well

So, You Won The Lottery?

Nope, I just decided that the amount I am going to learn with Gregg’s expert help, with regards to design, plant choice, sourcing, planting and maintenance, is worth the money I’m going to spend on it.  As is the beautiful addition it will make to my garden. Call it professional development without the CE credits.

And we’re not talking about a huge space.  At the moment, about 400 square feet.  Unless of course two G&T’s are involved in the planning and I start to move up into the sunny hillside – currently an invasive brambled nightmare – which I’ve always wanted to do, but which will involve terracing.

That would also involve divorcing my sweet husband and marrying a sugar daddy with a taste for older, opinionated women who wish to spend their step-children’s inheritance on plants and hardscaping.

Probably best just to stick to the original plan. 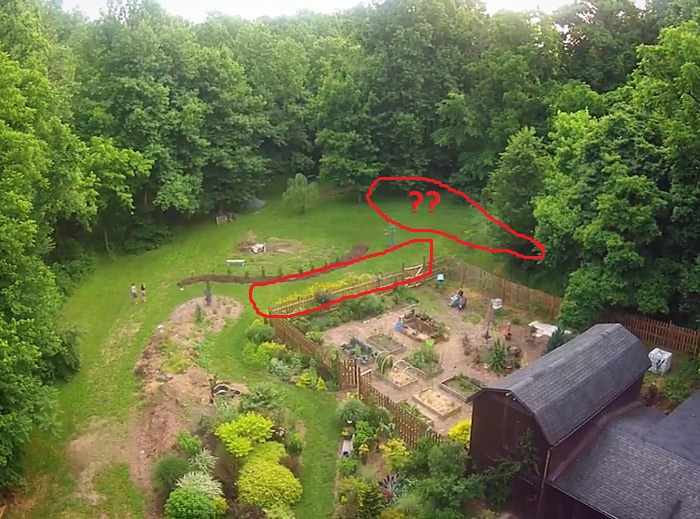 Here’s a drone shot of that same area in the summer of 2019. You can see that the serpentine bed on the left is only 1/3 planted at this point. The area we’ll be working with is circled in red. You can just make out the tops of the summer wildflower mix. The area we’ll be debating over is highlighted with question marks.

Because it’s time to create a garden bed where before, there has just been the outline of a garden bed. It’s the last part of the original “plan” for that end of the garden. After that we get back into the fantasy realm of “if I had a crew, I’d…” (terrace that entire hillside, build a rill, mulch paths through the forest…..etc…). This bed simply puts a period at the end of the current garden sentence.

Though I’ve never had a detailed master plan for any of my gardens, I have always had eventual goals.  From Chapter 4 Planning Your Garden in Big Dreams, Small Garden:

For those of us who can’t do it all at once, steps are needed.

Once I decided to put in a large garden in the field below my house – the first step was outlining an idea of the beds in relationship to each other and to a guiding path.  The next step was mowing around those spaces so I could always see what I was heading for. That step lasted a while. 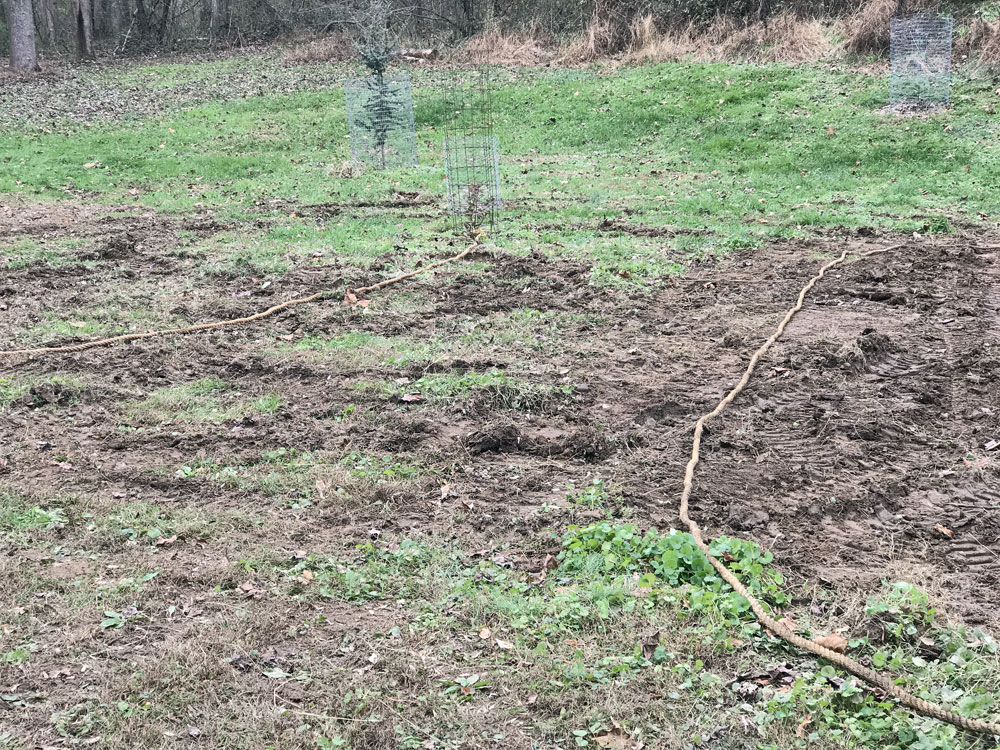 Laying out the idea of the beds started with rope in a muddy field and ended with a mower.

The next step was slowly cultivating the beds and keeping those areas maintained – in the case of the long serpentine bed, about 10 linear feet each season. In the case of this area, removing the turf and throwing a pound of wildflower mix and sand at the problem to give me something to look at besides Japanese stilt grass.

I’ll go into the mini-meadow building and its pitfalls in my next post on this subject, but a meadow was never the goal – it was simply a placeholder. The aim was to eventually create a mid- to late-summer/autumn perennial border in a flowing, naturalistic style backed by a black fence. When plant-literate friends came over and I told them of my plans someday, I’d shorthand the above with a simple phrase: “I want to Piet it up.” 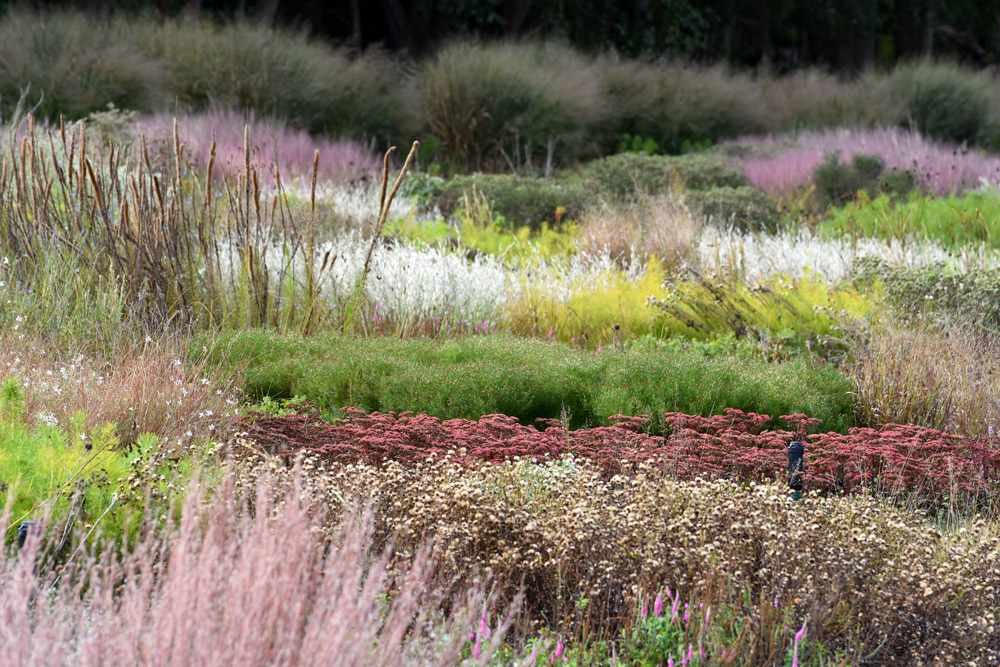 Piet Oudolf’s perennial design at The Delaware Botanic Garden in 2019. My space is much, much smaller, but I want to play with this type of loose informality.

A few months ago, Gregg Tepper and his partner Joseph O’Brien came down to visit and have dinner with us on their way down to Asheville.  Wine glasses were filled and these conversations were had.  Except they meant a little more to Gregg because he actually oversaw the installation of the Piet Oudolf meadow at The Delaware Botanic Gardens where he was Director of Horticulture from 2013 to 2019.  He is now Senior Horticulturalist at The Arboretum at Laurel Hill in Philadelphia.

As he stared at the shameful mess that was once a mini-meadow, now a mugwort-meadow (again, more on this next time), he said, “I’d love to help work this out.  It would be a cool challenge. We could get a plan together and talk to Melanie (Ruckle) at Putnam Hill Nursery about growing some of the plants over the winter, source some plugs where necessary, and plant it in spring.”

You’d think that I’d immediately make him sign something in blood. Right there.

Instead, I thought about my ancient and time worn philosophy (outlined in the points above).

I thought about the time commitment.

I thought about the weaknesses of the site.

I thought about the possibility of failure.

And then I said the thing we all say in such situations, knowing it will never happen – “That would be great.”

Then I mulled it over.

And I mulled it over a bit more.

And I called him a month later and said. “You’re on.”

So we’re on.  The mugwort and stilt grass was cut and sprayed, and will be sprayed again in a couple days (and then pulled by hand for the next 10 years no doubt) More on that next time too.  I am starting to think about plants I want to include, and those I don’t. And I’m trying to figure out a budget.  Triple gulp. 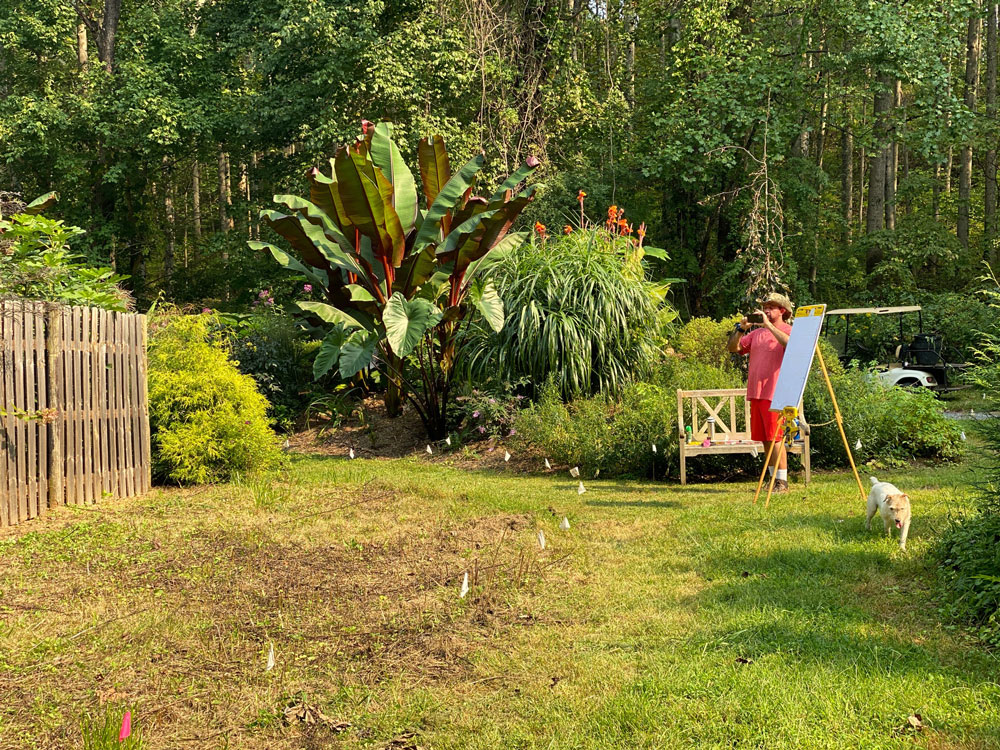 Gregg Tepper taking photos of the planting area with Mungo’s help. The last 20 feet of the Serpentine Bed [behind him] will also undergo a lot of changes as temperate shrubs and perennials gain weight and move out some of the more dramatic tropical placeholders.

I’m excited to share all this over the next few months as we go through the process of preparation and planting – the garden itself will take the next two to three years at least.  But just going through photos to illustrate this post, I found myself amazed by seeing what has already happened over the last seven years.

It’s an undiscovered country for this gardener.  An intoxicating one.

I hope you’ll join me and that it might be motivate you to approach a space in your garden you’ve been thinking about for awhile.  You’ll be able to find those updates both here and on GardenRant. 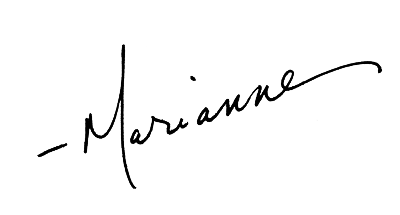 A version of this post recently appeared on GardenRant.com