Mixing It Up: Flowers, Foliage and Vegetables

Mixing It Up: Flowers, Foliage and Vegetables

Taking a friend home the other day, we briefly stopped at my house first.  From the windows of the car I stared at the new growth popping up in the Yellow Garden that leads to the front door. Bright chartreuse infused all with a light haze of spring color, though many taller structural elements still stood naked. 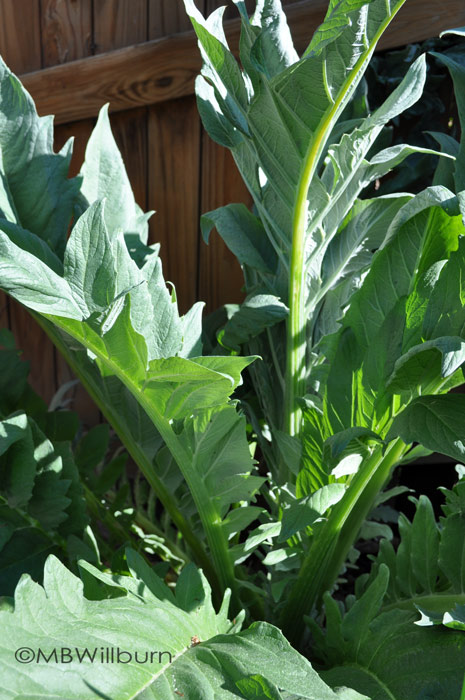 Cardoon is a fascinating foliage plant for the flower garden, or a tasty, beautiful vegetable for the vegetable garden – your choice.

I made a universal noise expressing gratification and followed it with “The garden looks so beautiful right now.”  My companion, well-versed in the vegetable arts, seemed perplexed. “What garden?” he said with genuine confusion.

I still gave him a ride home to his radishes, but begrudgingly.

The fact is, to many people “a garden” means a vegetable garden.  Had I taken him by the hand, led him down to the sunny veg garden by the barn and said the same words, he would have instantly understood I was talking about turnips.  He might well have engaged me on some matter of broccoli cultivation.

And he is not alone.  When I ask other people if they have a garden, or if they garden – the conversation moves predictably to the tomatoes they had last year or the peppers they’re planning for this year.  Rarely does the discussion begin with trillium and end with artichokes.

My vegetable garden gives me great joy, but so do my many ornamental beds. And while I may admonish my radish-obsessed friend for his tunnel vision, I equally admonish my ornamental-focused gardening friends for the same.  Cannot the celandine lie down with the celery?

If you are a committed vegetable gardener, one of the best ways of adding a little floral magic to your beds is by interplanting edible flowers with your edible vegetables.  Nasturtium, pansies, violets and borage make insanely beautiful accents in a salad, much less in the garden itself; and marigolds not only ward off many of our four and six-legged enemies, but can be used as a peppery accent in many foods.

When a garden is about production for the house, real estate is precious, but throwing a handful of zinnia and cosmos seeds into an unused and un-amended corner of the vegetable garden means late-season beauty and blooms to cut for inside. A different kind of production.

If you’d rather get your vegetables from a farmer’s market and put more of your square footage towards ornamentals, you can have your green cake and eat it too.  Cardoon and artichoke (particularly cardoon) make stunning foliage additions to the ornamental garden, as do the strong red and yellow stems of ‘Bright Lights’ chard and ‘Victoria’ rhubarb.   Leeks can edge the front of a flower bed and provide rations for late-season soups well after the rest of the flower garden is heading to bed. And who doesn’t adore the delicate umbels of fennel and dill popping up twixt their less edible companions? 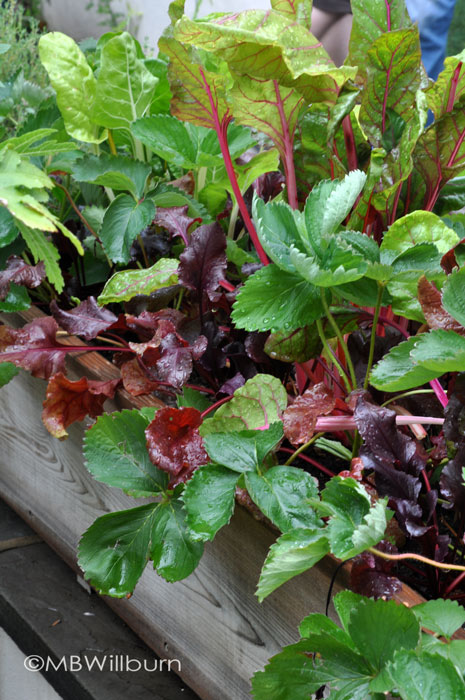 Highly ornamental boxes of chard and strawberries at Chanticleer garden in Wayne, PA several years ago.

Even plant collectors can hold their heads up high when clucking over a hard-to-find tomato like ‘Black Beauty’ or when showing off the magnificent red stems and pods of ‘Candle Fire’ Okra.

Of course, many of the preceding tales take place in the sun. If you’re dealing with a partly shady situation in your garden and you want to intermix flowers and vegetables, you should be looking at leafy greens instead of fruiting veg.  Chard, kale and lettuces are beautiful additions to the lightly shaded ornamental garden, and the sautéed early season fiddleheads of our native ostrich fern with a ‘wild’ ramp or two will provide you an undreamed of reputation with your foodie friends.

I’m interplanting more and more these days and I hope you are too.  Hopefully the next time my friend stops by his eyes will take in the edibles with the ornamentals and thus confer upon this holy mix the blessed name of ‘garden.’

Though it is equally likely that he will ask me why the chard is not down by the barn.