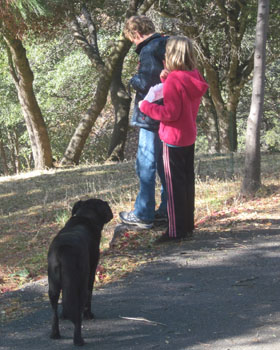 Years ago I wrote an article about living in your small garden with children and dogs. The process is sanity-stretching, and those who value that sanity give up early, plant a smattering of grass and throw a barrier around the whole thing to keep the little demons in. Nevertheless, there are those of us who are determined to beat our heads against a wall and landscape every square inch that the tax assessor has granted us – and for those poor souls I think I gave some profound coping strategy about co-existing with four-year olds who pull plants out by their roots and then ask you what they are.

Looking back, there was a fair amount of soppiness in that column, but I had no wish to show my true Tiger Mom status so early in my writing career. Still, over time, children grow older and wiser, their arms become stronger, and soon, their presence in the perennial bed means I might be getting some work done at a cut-rate price – not visiting the emergency room because they licked the digitalis.

I have a Labrador Retriever. He is the best of dogs; he is the worst of dogs. He will stay put with a gate wide open, but the moment he thinks he is alone, he’ll check all the latches with his nose and hope the kids forgot about one or two. He is the ultimate family dog, a dog that I don’t have to worry will grab a neighborhood child by the neck – a dog which, although loyal, will happily receive attention from the dodgiest of visitors. His name is Jake, he came from a shelter, and my husband and he conduct a love affair that spans space and time.

It is difficult to dislike Jake. Anytime I try I have at least one person in my immediate vicinity admonishing me with “Awww….but he’s such a good dog.” Indoors, they’re unarguably right. As dogs go, he is almost pathologically obedient and will leave the room on command. He plays with children on cue, waits quietly to be fed and doesn’t beg at the table.

Outdoors, he is a killing machine. 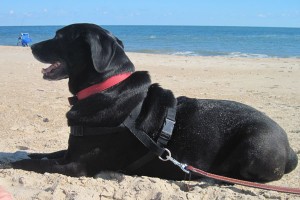 Jake is big, and bulky, and wields his thick heavy tail like a weapon of mass destruction.  His body works like an efficient smothering system. Eighty pounds of dog flesh flopped on early spring convallaria and hosta shoots means ragged leaves and crumpled stems in the summer. He isn’t bothered by the sharp flags of iris either. He goes where the sun takes him and lies in places I would not have thought remotely comfortable.

Yet, the act of lying down is only Part I of the destruction, for the whole process of jumping to his feet when caught, usually decapitates annual seedlings with breathless finality and sends me running to the drinks cabinet.

The high-nitrogen torrents that emanate from his nether regions are so potent, they will kill on contact any green foliage that unhappily ends up downstream. Furthermore there is neither rhyme nor reason to these executions, as it has something to do with what he smells or doesn’t smell on a particular day that elicits the familiar cocked-leg response. It took me three years of regularly replacing an Ilex crenata near the front step before I finally clued in that it wasn’t the Silver Maple with blood on its hands – it was that sweet, soppy, streaming Labrador.

Containing his massive presence in a garden filled with paths and pots and perennials is certainly a challenge, and I can’t say that I’m winning. It would be easier if I made him stay indoors and watch TV like any decent suburban dog should these days, but my conscience would needle me; so out he goes and defensive strategies are implemented that involve sharp bamboo and thorny pyracantha.

They are useless gestures. In the end, all will fall to Jake the Destroyer.

Still, as I am often reminded, I am not the only one who lives here, and that dog may not know how to work a vegetable bed, but he certainly knows how to work a crowd. He lies at my feet as I write these words this morning and looks at me with soulful eyes. He is happy to go for a walk or keep me company when I plant out kale seedlings later today – and that desire to be near me is what stops me from outright canicide each time I discover a newly flattened stand of Lunaria.

The company will be appreciated.  No one else – whether four legged or two – has any intention of helping me with that task.