A Longwood Christmas: Not Just For Gardeners

A Longwood Christmas: Not Just For Gardeners

Perhaps you’ve heard that approximately 2 ½ hours north of Central Maryland there is a world-class garden where fireworks and fountains explode every summer, horticultural splendor is commonplace and inspiration for the common gardener is calf-deep. 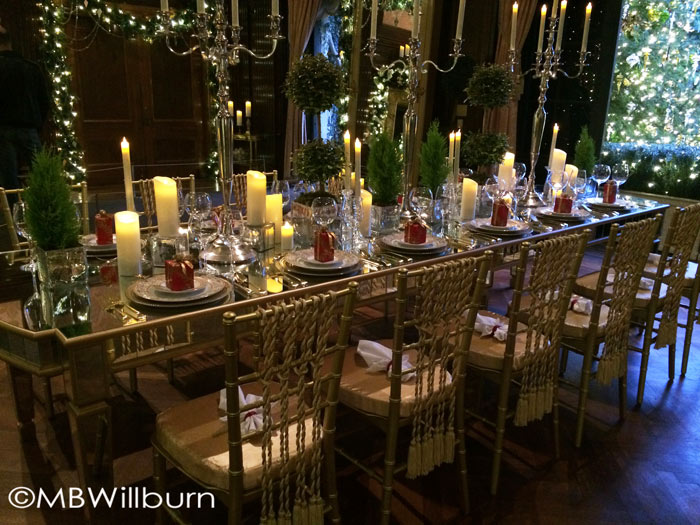 A magical feast in The Music Room

And perhaps you’ve ignored the hype – sure that gardeners like me tend to exaggerate when it comes to plants.  But what if I told you that even non-gardeners are overwhelmed by the sheer sumptuousness of it all? That children get excited? 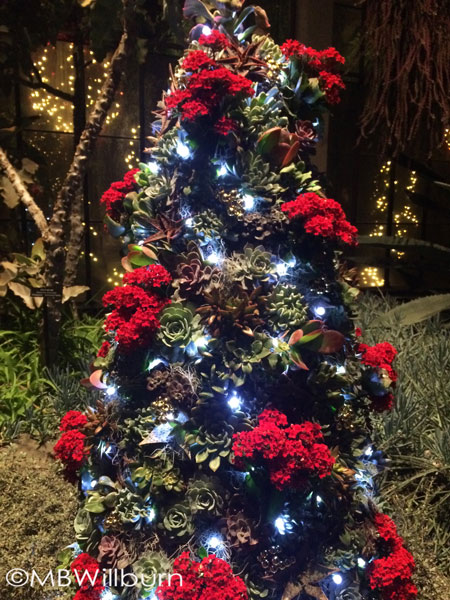 The Silver Room is known for their displays of succulent trees.

A Longwood Christmas will excite everyone

Up until January 7th, you’ve got a chance to thrill not only the gardeners in your life, but anyone captivated by the natural world and the pure delight that Christmas brings to this time of year.  A Longwood Christmas is an event looked forward to all year long by thousands of visitors, and this year, seven months after the much anticipated re-opening of the Main Fountain renovation project, there is even more to see.

This month, in celebration of my winter birthday I pleaded for a mid-week journey in the company of my husband and two good friends.  They acquiesced with smiles on their faces, but I knew they had quietly resigned themselves to The Birthday Death March through frigid Pennsylvania tundra.

Though I entered the gate that day ready to strong arm the troops to most areas of the garden using a combination of guilt, evil cunning and sheer force of will, it turned out I didn’t have to work that hard.

Longwood had made it easy for me.

A Longwood Christmas is not just about lights

Color was in abundance – far in advance of the 500,000 lights that would illuminate the Estate after dusk. Yellow and red twigged dogwoods were mulched with the orange-brown of bald cypress foliage. Hillsides were on fire with deciduous hollies laden with bright red berries. Golden Hinoki cypress stood sentry near hornbeam hedges bleached orange-white by the cold. 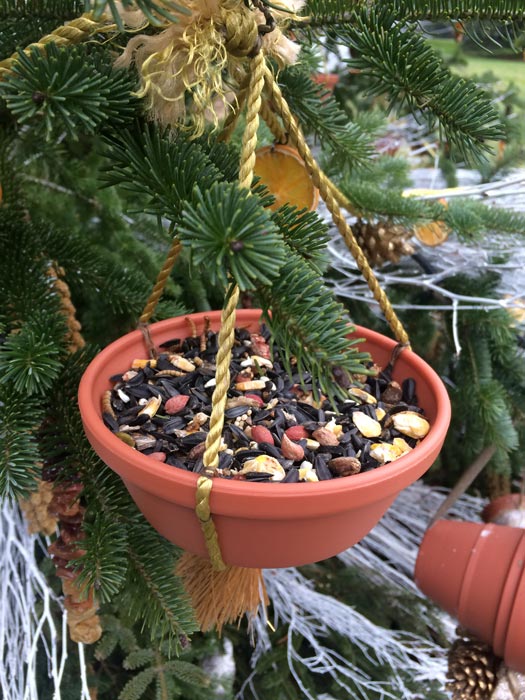 The Canaan fir decorated for birds and wildlife was so inspiring, I’m doing something similar at my place this year.

Near the entrance, fountains in the Open Air Theatre danced in time to Christmas melodies piped over an excellent sound system which drew us down to the Large Lake. There, a wood shingled treehouse was nestled into the woods, decked with natural greenery, bracket mushrooms and pinecones.

An 18-foot Canaan fir stood nearby, fully decorated in fruits, suet and seed for wildlife.

I half expected to see Will Ferrell dancing along the paths with us.

An hour later we stood in Peirce’s Park and looked over the 86 acre expanse of The Meadow Garden where burnished swathes of orange, tawny brown, and taupe might well have been painted on the landscape by a giant hand.

I was in my happiest of places, but the wind was chilly and the battalion was beginning to stiff upper lip it. As if in answer, a few more steps along the pathway brought us into the warmth of the Peirce-du Pont House, where an inspired collection of natural wreaths, ornaments and window arrangements had one troop snapping photos and the other two attentively watching the story of Longwood in a wood-paneled library.

I couldn’t let them dally too long. The east side of the Estate explored, there was the renovated Main Fountain Garden to investigate, where hornbeam hedging and allées of American Linden would have me longing for a staff and the money to pay them. 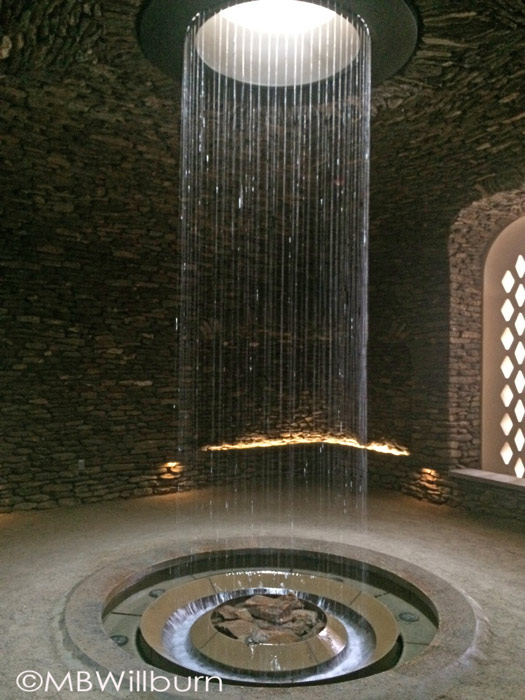 The sound of water permeates all in the new Grotto.

My husband – ever the rule breaker – found a secret door that turned out to be not-so-secret and led us into a stone-lined grotto behind the Loggia. Water poured from an illuminated ring in the center of the ceiling and we all stood and marveled at the beauty and craftsmanship around us.

From that enchanted, relaxing space we wandered through the old pump-house display rooms and onto a newly created outdoor plaza with tables, lanterns and a colossal fire pit created from the remains of Estate water pipes.

The plaza showcased the terraced hillsides of the Chimes Tower, and had it been a bit warmer, I might have stayed at a table for a glass of wine and just stared at that tranquil scene for an hour or so.

With the glories of the Conservatory still ahead, we decided to rest between sessions and take advantage of the new heated beer tents filled with Christmas trees and the scents of bratwurst and wood-fired pizza. Victory Brewing Company had partnered with Longwood to create a signature cherry oatmeal stout and the troops drank deeply and prepared for Phase Two.

It’s difficult to know where to begin when describing the 25,000 square foot Main Conservatory to the uninitiated. In warmer weather I walk quickly through the orangery and exhibition floors to find my favorite rooms – the Indoor Children’s Garden with its extraordinary bronze sculptures and interactive water features; and the Mediterranean Room whose cool, dry air smells of citrus blossoms, eucalyptus foliage and my twenties.

And those are only two of twenty rooms.

During the Christmas season my strategic route is thrown out of the window – there’s just too much to see. 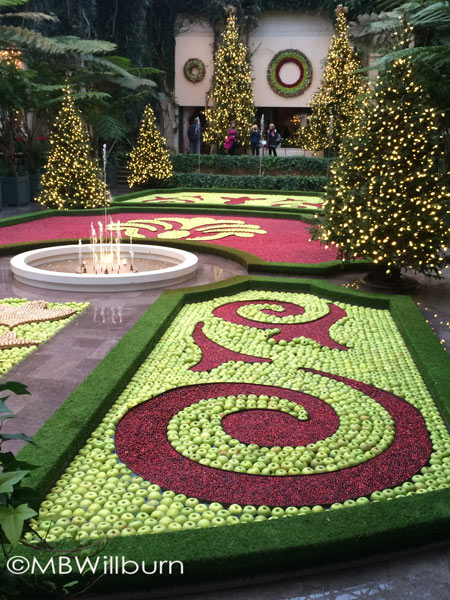 This year the floor of the Exhibition Hall had been flooded and designs created with floating apples, cranberries and gilded walnuts to simulate the parterre designs of Versaille-esque French gardens – the theme of this year’s display.

Full disclosure:  I’m not a fan of French parterre gardens.  I’m not into mirrors, gilt, crystals or opulence for opulence’s sake, and I haven’t yet succumbed to the current craze of tabletop topiaries and artificial candles.

But when I walked into the wood paneled Music Room set for a fairy-tale Christmas dinner and lit with hundreds of flameless candles, I was forced to re-examine a few prejudices and surreptitiously check Amazon for current pricing on Luminara tapers.  Spectacular, and yet curiously intimate, the memory of that enchanting scene is now interfering with plans for my own Christmas tablescape.

Which will be your favorite garden?

Each indoor garden took the main theme in a different direction.  Trees made of succulents in The Silver Garden. Gigantic grapevine spheres dripping with red amaranth along the Acacia Passage. Bright red bromeliads showcased in The Tropical Terrace. And in the starry-lit connecting rooms of the Estate Fruit House, a collection of Frasier firs amongst the espaliered nectarines – each one decorated by the children of neighboring schools. 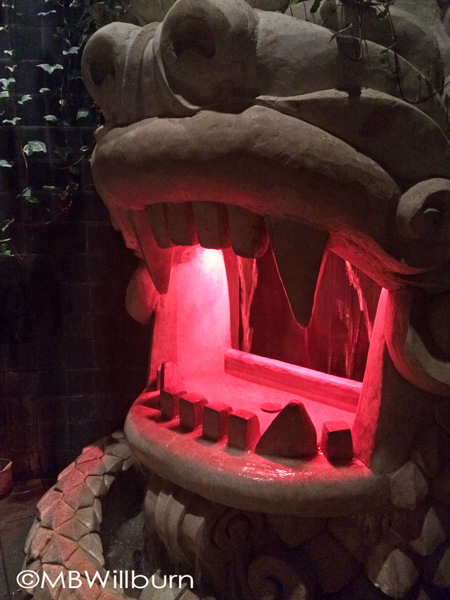 The Indoor Children’s Garden contains many mysterious and fascinating features – and invites your kids to participate in the magic.

In the Indoor Children’s Garden, we watched with delight (and not a little nostalgia) as an eight year old boy grabbed his mother to show her his favorite part of the garden – a stone fountain presided over by bronzed herons whose long tapering beaks would suddenly blow bubbles at irregular intervals.

We stood and watched his little body wait for the precious moment and then shiver uncontrollably when the miraculous happened – over and over.  I wanted to hug him, but didn’t want to be arrested, and so smothered the impulse – heading to the restrooms for a tissue instead.

Not that the story was any less magical once there.

The softly lit, 300×14 foot green wall passage that houses individual restrooms and is tucked into a corner off the East Conservatory is the largest in North America and home to over 47,000 plants.  Only Longwood could make visiting a public restroom a joyful experience.

A Longwood Christmas after dusk.

The Battalion warm and refreshed, it was time then to head back outside for Phase Three of the Birthday Death March – and yet no one was complaining too strenuously.

We bundled up, determined to get back down to the Large Lake, and accidentally took an unauthorized route that dropped us down into a valley of 80-foot trees sparkling with snowflakes and wrapped with thousands of lights.  Christmas trees floated on the lake and the treehouse re-welcomed us with yet more candles and the promise of hot cocoa in a neighboring kiosk.

I thought for a moment of Longwood interns and employees fighting with tangled bunches of lights on 80 foot cranes.

And then just as suddenly, I forgot about them.  The effect created by all that hard work was simply too overwhelming to make room for anything else in my poor brain, however generous the sentiment.

We wandered the grounds for another hour, finding it hard to pry ourselves away from such a festive, inspiring sight.  And during the car ride home we used that inspiration to finally start stringing the cranberries I had brought along in hopes that we might find our inner-elf by the end of the day.

Well done Longwood.  The Beer Tents were a particularly nice touch.  We’ll see you in spring for the tulips and summer for the ideas and no doubt I’ll marshal the troops for another Longwood Christmas next December.  I have a sneaking suspicion I won’t have to plead this time.

December 22-January 1st are peak days for A Longwood Christmas and timed tickets via phone or online are required for entry.  From January 2nd – 7th the crowds disperse but timed tickets are still required.  Visit www.longwoodgardens.org for more information and pricing.

This article reprinted with kind permission of The Frederick News Post.  For many more photos of A Longwood Christmas, follow The Small Town Gardener on Facebook.