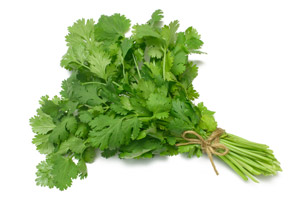 The following is a public service announcement brought to you by the Cilantro Advisory Board, or C.A.B.  Please take a moment to read this message, and seriously consider this growing problem which threatens the future culinary life of cilantro in American homes.

We here at C.A.B. are exceedingly proud of the special way in which cilantro (aka coriander or “The Salsa Herb”) has steadily graced the kitchens and tables of millions of Americans over the last few years.  Through the unceasing efforts of our members and affiliates, we have managed to introduce this underdog herb to a general public who once mindlessly chopped parsley onto their suppers night after night.  Our hard work has given it the prominence it deserves, pulling it out of the specialty herb aisle and making it one of the only two herbs that can now be found sold in bulk bunches at your neighborhood grocery store.

The battle wasn’t easy.  There were times when we were dismayed by the reluctance of the public to try something new, something fresh, something guaranteed to garnish their meals with the flavor of foreign lands.  We showed people how to enthrall their  guests with a spicy Pad Thai, we gave them homemade salsa with a fresh kick, we redefined Mexican Lasagna, and we demonstrated how unbelievably good curry can be… but now we must turn to the very public we once served and ask for its help.

Today we face a crisis of epic proportions, a crisis which threatens to upset many dedicated years of hard work and destroy the hard-earned reputation of an herb which we here at C.A.B. are proud to sponsor.  Ironically, this threat does not come from our competitors at the Parsley Advisory Board (P.A.B), who have graciously, if somewhat reluctantly, given up market share to the new herb on the block. This crisis comes instead in the form of a six-legged invasive pest waging war against the farmers, home owners, and gardeners of this great land; and which has now begun to threaten its chefs, restaurants, and home-grown gourmets. 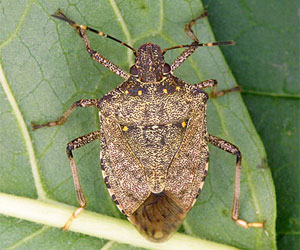 We are speaking of course of the Brown Marmorated Stink Bug, aka Halyomorpha halys, a fairly recent and most unwelcome Asian immigrant which was apparently introduced into eastern Pennsylvania less than fifteen years ago and has been on the move across our country ever since.

There was a time, several years ago when the threat of these dastardly insects seemed trifling in comparison to gardens laid waste by hordes of another invasive pest – the Japanese Beetle.  And for much of this time, homeowners and gardeners alike, wary of the veiled threat inherent to the very name “stink bug” did not instinctively squash this insect, preferring instead a jar of soapy water, a quick flick outside, or of course, “the toilet flush solution.”

Those were the good old days.  As their numbers grew, people became desperate, and in their desperation, swatted those pests with whatever they had on hand.  With the very first squish, and the resultant pungent aroma wafting upwards toward the nostrils, the mission of the C.A.B became much more difficult. We were forced to admit that the odor produced by these foul little monsters bore more than a trifling similarity to the fragrance of our own greatly-prized herb.

From across the land we began to hear reports of customers refusing salsa in restaurants due to the effects of Post Traumatic Stress Syndrome on an insect-ravaged people.  Indian curry houses were being asked to “hold the coriander”, and Iron Chefs across the nation scratched out “cilantro” as an exciting new possibility for ravioli or sorbet.  Matters came to a head last night when the husband of our very own C.A.B. President refused to enter the kitchen until she had “stopped chopping that disgusting stink bug grass.”

We ask for your help ladies and gentlemen.  Though similar, these two scents are not one and the same.  Do not toss to the side of the road a faithful friend who has been your companion through so many of your culinary adventures.  We heartily urge those who still feel confused over the issue to execute and sniff as many stink bugs as it takes to put to rest the outrageous suggestion (as was recently advertised) that one might be substituted for the other.  In that same vein we might also add that there is no unpleasant crunch to cilantro.

We remain faithfully indebted to you, our public, and ask for your continued support in our (we hope) temporary hour of need.

Yours in culinary excellence,

The Cilantro Advisory Board in partnership with Diverse Dinners, Inc.