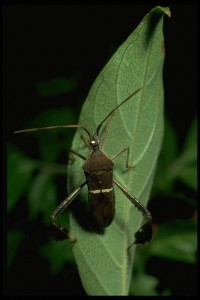 There is a new visitor rapping on my garden gate.  I did not invite him, nor his many friends and relations.  I have never seen him before, nor do I wish to ever see him again.  In the hot summer season of dry crunchy grass, wilting pepper plants and the occasional dried up water barrel; his presence in my garden adds insult to injury.  He is ugly. So is his girlfriend. He is Leptoglossus phyllopus, aka the leaf-footed bug.

Just when you think you have seen every single pest known to man, another one comes knocking on your door looking for nourishment.  Over the years I have had carrot rust fly on the carrots, cucumber beetle on the cucumbers, squash borer on the squash and cabbage looper on the…yep…you guessed it…cabbage.  These are just a few of the many names on the Willburn Most Wanted List.  Some years are better than others – causing me to either weep with sorrow or go down on my knees in thanksgiving.  But one thing remains certain time after time:  stressed plants attract opportunistic pests and disease.

I’ve had my share of healthy roses visited by the Japanese Beetle or fresh, lush kale sucked dry by the Harlequin Bug; but for the most part healthy plants give off the same confidence that a six foot seven bouncer gives off at an exclusive Hollywood party – that is to say, “don’t even try it.”

A stressed plant on the other hand – a wilting plant, a plant without hope of water or nourishment, or love for that matter….gives off weakness pheromone like a newborn wildebeest on the Serengeti.  Who knows why this is so, but then, who knows why ninety honey bees found a ½ inch splat of beeswax on my deck this morning – insects have senses beyond our puny imaginations. 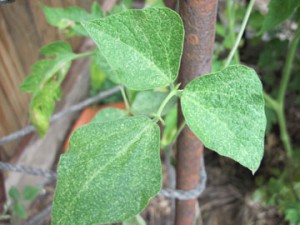 Spider mite has had its wicked way with this bean

All it takes is a plant on the endangered list and the little gold diggers move in, ready to divest it from life, liberty and the pursuit of happiness.  Take last year’s beans for instance.  They didn’t have a chance.  The seedlings that escaped beheading from a mercenary earwig army dealt with early hot temperatures and lack of water and grew about as fast as a sullen conifer seedling.   Just as I was starting to feel sorry for them and give them a little more of the wet stuff, spider mites moved in and stippled the leaves to such an extent that photosynthesis was no longer a viable option.  By the end of the season they had headed over to the compost pile to save me the trouble of digging them up.  How very considerate.

Now, I didn’t have spider mites on my beans two years ago, or, if I did, they were so few and insignificant that I overlooked their presence.  But then again, my beans were healthy that year and exuded joie de vivre by the metric ton.

So here I am, in the midst of this year’s season, coming face to face with a new kid on the block – a juicy-fruit terminator brought out of the woodwork by the mournful sounds of stressed vegetables singing Kumbaya in the evenings.  I don’t know how I’ll get rid of him – he’s not clumsy enough to be caught in my soapy water bucket.   He’s quicker than a stink bug and doesn’t want a nap and a cigarette after mating.  And since I have no desire to spray ripening tomatoes with pesticide of any kind, I suppose I’m going to have to leave it up to the birds.