How Does Your (Community) Garden Grow?

How Does Your (Community) Garden Grow? 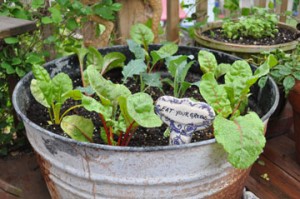 In the depths of February, gardening seems like a pretty fabulous idea. With everything in deep dormancy and fresh salsa just a mouth-watering few months away, we are liable to make promises that are hard to keep once spring schedules start up and time becomes precious.

Thus in the depths of February, I, and several other optimists made this promise – to ourselves, to each other, to our city – the promise of a Community Garden. A vacant lot was secured, donations were solicited, gardeners were found and weekend after weekend was spent in the pursuit of something worthwhile and intensely satisfying.

Then spring got in the way. Sports schedules started to interfere with easy Saturdays at the site. My own garden had the temerity to start growing rampantly. Spouses all over town started to grumble and time raced by, bringing us ever closer to planting deadlines and warmer weather.

And one day not so long ago I found myself standing at the half-completed site and wondering what on earth we had been thinking all those months ago. I was joined by a friend and fellow toiler, but he was kind enough to stay silent as I brooded.

I stood there, looking at a thousand dandelion heads, empty now of their fledged seeds. I stared at Johnsongrass pushing up through twelve inches of heavy soil in some hapless gardener’s bed, and contemplated the mound of shredded brush on the hill, now rife with plantain and all things wicked. And I sighed. I sighed heavily.

I thought of my own garden, neglected at home.  I thought of un-mulched beds and pathways begging for gravel. A trailer heaped with three months’ worth of yard waste and potted seedlings languishing under a hot sun, screaming ‘I didn’t ask to be born!’ as they withered in a cold frame I forgot to vent. 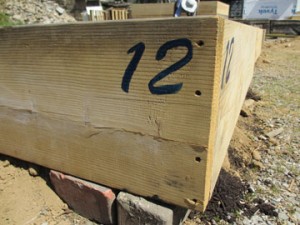 I thought of the impossibility of communicating to the gardeners the extent of work still required – asking one more time for help – more precious hours given towards a greater cause. Many had already been down at the site weekend after weekend….yet still so much to do. I dreaded the thought of sending out yet more reminders. Those brave souls who signed up for the first year in a community garden were as pioneers building cabins on a prairie. But did they truly understand what was involved when they got in the wagon?

My companion was not so easily beaten. He looked out upon the same scene and saw what had been accomplished. He looked past the weeds and the half-filled boxes and he saw twenty garden beds where there had been rubble. He saw compost bins where there had once stood ten-foot weed trees. He saw a new three-board fence, rustically enclosing the project as a new landmark in town – a new destination. He saw old friends gathering and new friends meeting for the first time. In short, he saw community.

He very reasonably and very rationally broke down our next plan of attack. 1) Finish filling beds, encourage gardeners and start the planting; 2) Assume we must approach the project in phases and cut out one or two labor intensive tasks for this year; and 3) Have mulch delivered, lean on gardeners to spread it and make all things lovelier with the uniformity of double-shred.

His plan was sound. I tried to stop my lower lip from trembling and promised to send out another encouragement filled with good natured cheer; no matter how much I wanted to start barking orders like a tin-pot dictator. 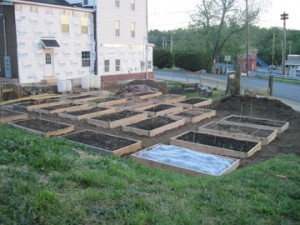 The phone rang early the next morning and I recognized the down-to-earth manner of another friend who had been invaluable in the first stages of the project. Even though he had no intention of gardening at the site, he considered the project a great boon to the city and worth his volunteer hours. I certainly hadn’t expected any more from him.

“I’m going down to the site this morning.” he declared. “Just checking to see where you need that dirt moved.”

“It’s going into the beds that haven’t been placed or filled.” I said, wondering if I was still asleep.

“Don’t worry about it,” he replied off-handedly. “I’ll take care of all of that – just wondering where you wanted the extra dirt spread.”

“If it works for you, I’d like to take the dirt out of the beds that are growing weeds, put down some cardboard and throw the dirt back in.”

“It works for me.” I said softly, and hung up the phone with a new lease on life and a new faith in this fantastically intertwined support network some of us call ‘friends’, some of us call ‘neighbors’ and some of us have come to know as ‘community’.

We’re planting now. Tomatoes are in and new faces have appeared. There are plans for a get together on a warm night in June and another bench has been donated for gardeners weary with planting. I am no longer weary. I look around at the site and see February promises fulfilled and May promises well underway.

And I can’t wait to taste that salsa.