Houseplants and Insects: A Few Tips From a Pro

Houseplants and Insects: A Few Tips From a Pro

By this point in the winter, most houseplants have endured months of sub-optimal conditions, not to mention sub-optimal care, and insect levels may be higher than we think. We’ve still got at least two months before these pots can safely hit Mid-Atlantic patios and decks for the summer season, and if we want to have anything to show off, it’s time to do something. 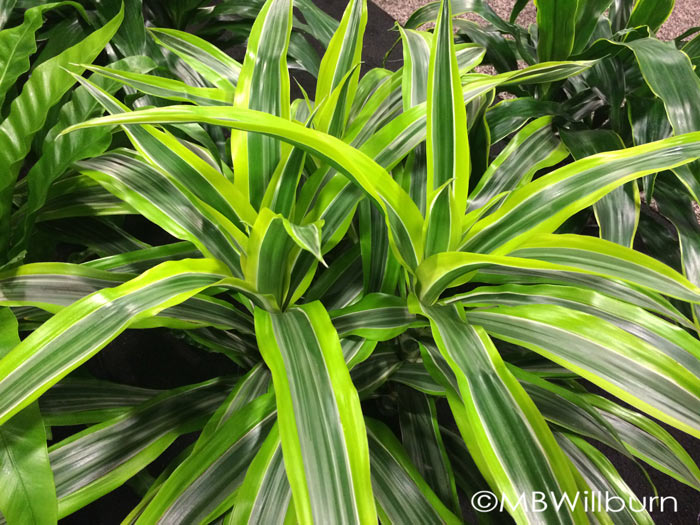 Scale and spider mites love dracaena. Because it is such a low maintenance houseplant, owners may not pay attention until it is too late.

Scale, aphids, spider mite, fungus gnats, whitefly, mealy bug…these are not bullies that simply go away when the gardener turns the other cheek.  If we don’t cope with them now, they will only get worse. 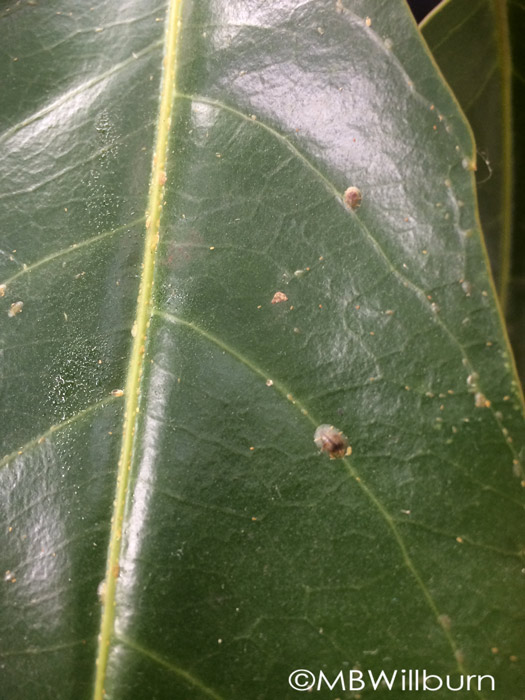 An infestation of scale on Schefflera amate. A spray of sticky honeydew from higher leaves is visible on the left half of the leaf.

Even if you were exceptionally careful in the autumn, you may still have an insect issue. Check your plants. Every October I bring in plants that have been treated at least twice with horticultural oil over a two week period outside, yet something always gets by.  Pregnant aphids treat my succulents like a home for fallen girls – also sneaking in as eggs that are too tiny for these poor eyes.

Sticky honeydewed foliage is usually my first sign – or at least the sign I can no longer cross the room to ignore without gummed-up feet.

Honeydew doesn’t just coat foliage, it coats floors, furniture, lampshades and anything else that happens to be underneath the little vampires.  It is the excrement of sucking insects – a sugar-rich liquid expelled just as quickly as the sap is ingested. A bit like a newborn baby without the diapers.

It goes without saying that by the time you notice it, you’ve got a big problem on your hands – and it’s going to take more time and effort to solve it than it would have taken to keep an eye on the plants in the first place.

But now is not a time for judgement (says she, conveniently).  It is a time for action.  So I consulted local plant guru and yoga instructor, Jan Faulkner, whose successful business, Tropical Plant Outfitters beautifies skyscrapers and office buildings throughout the DC Metro area.

Jan is a pro at keeping plants looking lovely – and many is the evening has she sat on my couch, innocently and beautifully sipping a beer before suddenly and violently pulling off three offending stems from a neighboring houseplant.  She always apologizes profusely, assures me they “had to go” and then seamlessly goes back to talk of yoga and calming the mind.  The contrast is a priceless one and makes me smile to think of it.

I trust her completely – after all, her business relies on great looking plants – so when I found that a gifted agave was covered in scale and my large and small umbrella plants (Schefflera spp.) were similarly affected this year, I decided to stop limping along with a cloth and mayonnaise and find out what the professionals were using.

Jan happened to come over on the warmest day in February, which made things much easier as we dragged these seven and ten gallon pots onto the deck to treat them.  Had it been a cold day, they would have been dragged to a central place on my tile floor where spray would not hit furniture or curtains.

A mix of houseplant solutions

Jan’s weapon of choice is OMRI listed Safer Insect Killing Soap, and she mixed up a bottle as we sat on the deck, enjoying the unseasonable warmth.  Though she has used neem oil, she hates the smell (as do I), and her method of spraying the plant, then gently working through the foliage with her hands to remove the insects is made vastly more pleasurable by working with soap over oil. 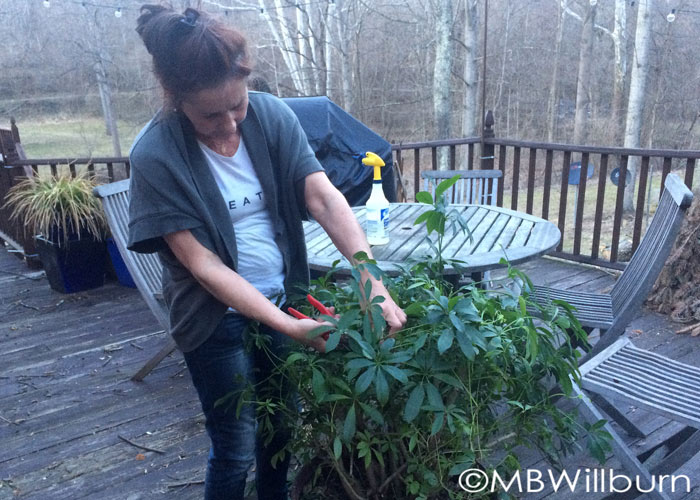 On a warm evening in February as the sun goes down, Jan Faulkner trims and sprays a Schefflera arboricola for scale.

She inspected the plants, pronounced judgement, (“it’s not that bad”), and gave the first one a light haircut to remove awkward stems, dead foliage and invisible crawlers (the first instar stage of scale insects) that like to congregate at the tips of new foliage.

And then the spraying and fondling began.

Leaves, stems and woody crotches were all addressed in turn. ‘A clean crotch is really important.’ she stressed, and I could not disagree.  Within a few minutes we’d caressed that first schefflera to within an inch of its life, and our hands, whilst covered with soap and scale, were not so covered as to make me turn in my gardener’s license in shame.

As it was later in the season and the infestation had been moderate, Jan applied a light granular systemic for houseplants from Bonide and bid me to fertilize and repeat the soap procedure in a few days.  For light infestations, she skips the systemic and does fine with two rounds of soap.

The spiny variegated agave didn’t need fondling; or rather, if it did, it wasn’t getting any from me.  I sprayed where I could (scale loves those crotches), and applied systemic to the soil, watering it in well.

All set for the homestretch

A week later and the worst is behind us.  The schefflera are happy, glossy and clean as a whistle, and the agave is much improved as well – though another treatment will be necessary.  Insecticidal soap will also kill spider mite, aphids, mealy bugs and a host of other bad boys.

For those in the insect air force – fungus gnats, white fly, and winged aphids, try yellow sticky cards.  Jan recommends them, and after nosing about a bit into the underwear of Longwood’s 300ft indoor green wall, I can report that so do horticulturists in the know. 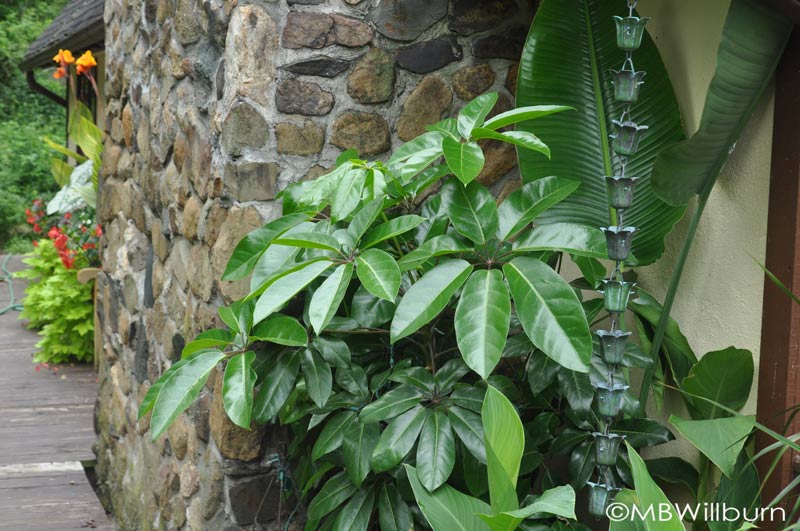 Soon, plants will go outside on the deck for a summer of sunshine & vigorous growth.

With houseplants trending higher and higher these days (macramé is so back, btw), it pays to stay ready to fight the pests that can quickly turn a thing of beauty into a spindly, scraggly bit of shame.  Use the methods that make the most sense to you, but use something before there’s no going back.