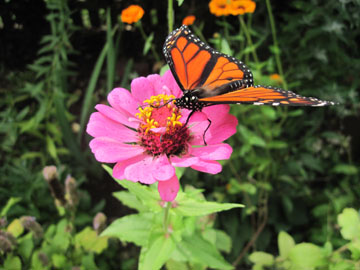 Thirteen years ago I held a newborn baby boy in my arms and marveled at tiny hands and doll-like feet. Two years later, that boy was getting bigger surely, but still a baby…small and almost androgynous with a head of blonde curls and blue eyes, stubby legs and a brilliant smile.

Nine years after that, it began to dawn on me that things were not going to remain the same for much longer.

Today, I stare at a young man who has outstripped me in height, is rapidly building muscle, and whose voice is now a full octave below my own…..and I never saw it coming. My common sense informed me that legs would get longer and cars would get smaller and I would find myself staring at a teenager who needed space; but we had so many years of baby/toddler/child time that it never seemed this day would come.

That same naive mother who must now adapt the spaces of her home, car, and sadly, bathroom, for a galumphing, harrumphing teenage boy, was once just as naive in the garden.  Now she stands, surrounded by jungle-like growth, and is forced to conduct the same bemused shuffle in a space she can still remember as bare – a garden now filled with plants that insisted on reaching their full potential.

I, like many gardeners out there, simply didn’t see it coming. Faced with a large expanse of empty soil, tiny amounts of cash, and dreams of lush abundance, I looked for plants that sported the terms, ‘Grows fast’, ‘divide frequently’, or ‘excellent thick screen’ when I made my way through the nurseries in those early days.  I made a cursory glance at vital statistics, but terminal size felt so far away.

It was simply impossible to stare at a one-gallon forsythia and imagine an eight foot shrub, or plant a tiny wisteria whip and envision a gangly, aggressive thug. My garden was big. I was broke. Mea culpa.

Now squarely on the other side of matters, the last couple of years (and no doubt the next few) have been centered around editing the pretty mess I have made for myself. Consequently, I make it my business to plead with new gardeners when I see them creating the same difficulties for themselves – whether on an annual or a permanent basis.

What do I mean by annual? Crowding your plants isn’t just about fifty foot arborvitae and ten foot spirea taking over the cosy little patio you set up in the corner of the garden. It’s about zucchini that need four square feet of space per plant and are given two. It’s about indeterminate varieties of tomatoes that look so small and helpless in April that you plant a couple friends nearby to keep them company – then months later find it hard to locate salsa ingredients in a tangled mess of yellowed leaves and broken stems. 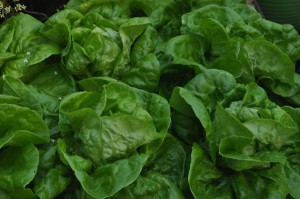 Overplanting is all well and good when you are creating an over-fed, over-watered and over-tended hanging basket of all things flowery and flouncy. It works when you are carefully following the doctrines of Square Foot Gardening by Mel Bartholomew and planting four lettuce to the foot. It doesn’t work quite as well when you come home with a whole mess of plants and proceed to fill up space based on the size of the little darlings in your six-packs.

As my teenage boy has taught me, growth happens…and it happens faster than you think it will. Before you know it, that weedy, straggly forsythia screen lining one side of your property will start to push down the fence and take over the kids’ playhouse. Think carefully before you dig the hole and choose plants whose eventual size matches your eventual needs. We might not have a choice when it comes to the growth of children, but we certainly have a choice in plants.

Oh, and don’t think you’re going to prune them into submission either. All it takes is one slip up (such as a fall off a horse in the middle of summer) to teach you that you have control only as long as you can wield a pair of shears. Plant with care and you can spend the summer putting in a second bathroom for your teenager instead of wrestling with root-balls the size of boulders.