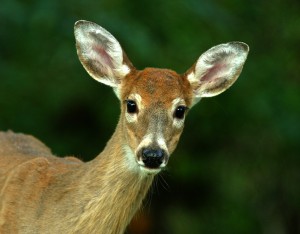 In Montgomery County, Maryland, it is now estimated that the deer population is hovering near 100 head per acre.  It’s enough to make decent gardeners tear up their landscaping in despair and put down gravel and plastic flowers.

Not that it will work.  A friend of mine in Germantown moved his deciduous hollies to the fenced back garden and in their place ‘planted’ berry sprays of Made in China.  The deer were not deterred and ate them right down to the wire.  They spat out the berries however, preferring brown plastic stem wrapping to hardened pellets of Red Dye No. 3.

Another friend planted a front garden on a busy suburban crossroads with plants known to be toxic and deerproof and ended up with a front garden filled with nubs, stalks and heavily pruned shrubs.  They don’t make anti-depressants strong enough to cure him at this point.

Obviously there’s a problem with this picture.  With less habitat available for predators, and less hunters out there, the deer population has reached epic proportions – bad for them and very bad for us.

A deer that eats a piece of plastic might be an amusing anecdote when sharing gardening war stories, but that is one desperate animal we’re talking about – an animal in tight competition for resources.  A heavy deer population means a heavier deer tick population, and that means that the next time you take a quiet walk in the footsteps of Thoreau, you may come back sporting a life-changing illness – Lyme Disease. When Nature swings out of balance, she really swings.

A number of solutions to the problem have been suggested.  The word “cull” comes quickly to this girl’s mind; and indeed, controlled culling is still practiced where housing density permits it.  Birth control pellets have also been used, but oddly, this can often result in more twin and triplet births.  One step forward, two steps back.

But my favorite solution (insofar as it illustrates how far we have come from any type of commonsense connection to food, the Earth and our money) is one recently adopted by Fairfax County: the surgical sterilization of does.  Cost:  $1000 a head. Privately funded or no, the snarkier part of me can’t help but take this ‘solution’ back in time 400 years:

Settler:       Captain Smith – the deer have decimated the spring crops this year and all the fall seedlings have been eaten!  What are we to do?!

Settler:       Geez….is this what happened to Roanoke?

In our new home, age-old deer paths run through our property like highways – complete with rest stops near the peach trees, asparagus and hosta beds.  Thus, all planting so far is within spitting distance of the house and the dogs are nightly encouraged to access their inner wolf. 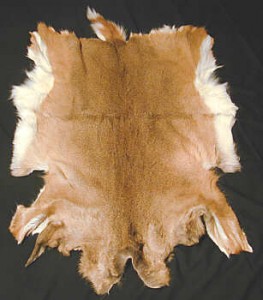 Putting in a garden when one knows that deer browsing will not only be an issue, but a huge issue, is quite a production.  One cannot simply look at the landscape and think “such-and-such would look fantastic there” without immediately thinking, “Can I protect it?”   When shrubs meant to beautify are covered in browse-proof concertina wire; and the vegetable garden can only be accessed through an eight-foot chain-link gate, gardening does tend to lose a bit of its romance.

Without money to build a massive yet tasteful fence, our first step in dealing with the potential problem has been to fill the freezer and encourage our friends to buy hunting licenses.  So far it seems to have worked admirably.  Two four-foot deer candies that I planted in the field last fall (aka Thuja occidentalis) show no signs of damage to their tender bronze-green foliage.  That’s pretty impressive when all else is either grey, brown or white.

Either the smell of death hangs heavy in the air ’round here, or all the does have migrated to Fairfax County where they know they can get free birth control.