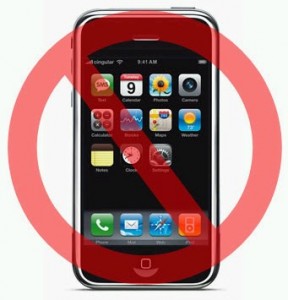 A week ago I was leisurely wandering with a friend through his garden when I spied the familiar burnt orange of leaf blotch discoloring what could only be a large horse chestnut tree (Aesculus hippocastanum) near his drive. I was surprised to see the tree in such a dry, rural Californian setting and proclaimed my discovery whilst springing over to examine the telltale conkers lying in a mass of opened husks under its branches.

He was not so sure, having remembered a different name given to him years ago with the tree, lost to the depths of time. We picked up the rich mahogany colored seeds as we talked, and after much time spent in “maybes” and “maybe nots” went on to discuss the Californian Buckeye (A. californica), currently slipping into dormancy around these Western towns. The conversation was an easy one, I being fairly sure and he being fairly sure, and much good-natured bantering between us as we wandered along his hillside terraces on a lovely afternoon – eventually moving on to other trees, other thoughts and other stories.

A few days later I am sitting at a dinner party with friends, old and new. We are discussing a film from the Eighties: “Was it made in ’87 or ’88?” someone asks.  “Certainly ’87,” says an authoritative film junkie. Another tries to mark it with events…a presidency…or the year banana clips made their debut perhaps. “Was that the year the Wall came down?” another wonders…”Nope, definitely ’89 on that one” shouts a history buff. The conversation is in full swing now, everyone offering their opinion, everyone sure of his or her facts, and much laughter ensuing. We are in great danger of forgetting the movie all together and moving on to something even funnier.

Suddenly one of the participants pulls out his smart phone and starts to tap rhythmically upon its screen, hailing the modern Oracle. Almost in challenge, another guest pulls out hers and they duel silently for the gift of an ultimate answer.

There is a awkward hush to the laughter, as those around the table realize that resolution will soon be reached and to banter further would be futile. Long seconds go by and a guest offers up a new conversation starter, but it will be minutes before the dialogue resumes its momentum. A few more seconds pass and the Oracle speaks: 1988.

Someone is right, someone is wrong. There will be no open ended ‘maybes’ here. The other duelist offers up a youtube clip of a famous scene – it is passed around the table, creating a solitary experience between viewer and screen where a brief moment ago there was group cohesion. Inevitably this leads to more clips, and more quiet, as diners politely wait their turn. Now that the ice has been broken, another friend feels justified in checking her email under the table. The age of instant information has not only dawned – it is sitting at your dinner table one-upping the guests. 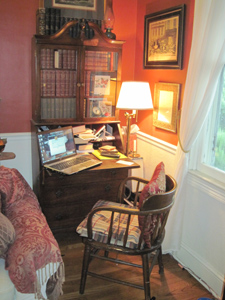 Books happily share space with technology at my writing desk

I am not a raving Luddite. I readily admit that advances in everything from computers to photography over the last ten years have made my job a lot easier. I no longer need to be at my desk with RHS manuals within reach to find out the name of that amazing unnamed Floribunda I came across on a garden tour. I can write on vacation, (indeed I am doing so now) and send articles to editors over invisible wireless connections that hum with the presence of the hive mind – ever busy, ever building, ever updated.

You will not see me trying to turn in my laptop for a Remington 1953 Quiet Riter, nor will I shun the miracle of gardeners communicating internationally and instantaneously over the merits of a certain plant. So you will forgive me I hope for feeling a bit defensive as I watch civilization’s oldest art, that of conversation, being hijacked and left for dead on the information super highway.

You may argue that conversation is evolving into something else, something befitting a new, interconnected world, and though I recognize that our world is changing at lightning speed, I will quietly counter with this:

We will always be, at our core, human animals in need of genuine human contact; and the personal relationships forged in sincere, focused conversation, whether over a fabulous fettuccine alfredo or over a gorgeous Frittilaria imperialis, can only make our lives richer and our bonds with one another stronger. Why cheapen that experience with only half of your consciousness – the other half compulsively checking what the rest of the world is up to just in case you miss something? Living “in the moment” cannot mean every moment simultaneously. 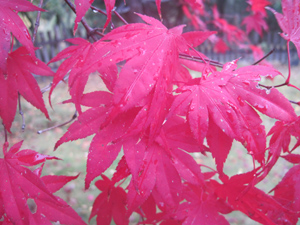 If you are lucky enough to share a table with your nearest and dearest this Thanksgiving, please resist the urge to quick-draw the pocket sized Oracle from its holster. No one really needs to know the definitive answers to an evening’s trivia, nor does the world outside of your dinner table need to be updated on what you’re eating or where you are. The only people who matter right now are those around that table, and giving them one hundred percent of you is the very best gift you can give.

Save those texts for later, and you will be saving a great deal more than that. Happy Thanksgiving everyone.