Creation vs. Maintenance: A Balancing Act

Creation vs. Maintenance: A Balancing Act

One of the most popular talks I’ve been giving lately deals with maintenance and balancing one’s life with one’s garden – more specifically, not taking on a project that creates six new maintenance projects in the foreseeable hereafter when the lifeboat is already taking on water. And to those watching me bounce around the podium, laser pointer in hand, it would appear that I am a model of self-discipline, never taking on more than I can chew…or weed. 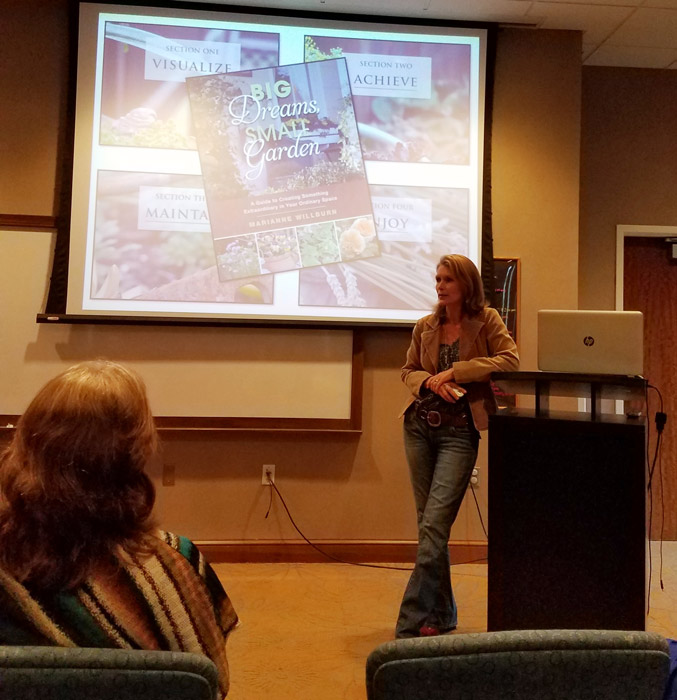 Looking like I really know what I’m talking about. Except when it comes to biting off more than you can chew, I do. (Photo: Jerry Knight)

But the reality is, I’m struggling every day with the desire to create versus the obligation to maintain that which I’ve already created. Every day.

I’ve got ideas. Big ideas. The gardens I could create with my ideas and a spare six million dollars would have you gasping. Except I can’t find six hundred at the moment so it’s a bit of a moot point.

Still, when energy was high in April and I temporarily forgot that I haven’t any staff, I decided to begin the process of extending the dry perennial and shrub bed to create a network of pathways in the sunny garden and connect the vegetable garden to the whole picture. It was a brilliant idea in the same way that installing a silver-stocked butler’s pantry for a non-existent butler is a brilliant idea. Who’s going to polish the fish forks one asks?

However, I had been touring a collection of excellent small gardens, and one thing they all had in common were pathways leading you purposefully to the next eye-popping display or intimate space.

My heart ached for same. I’ve had pathways. I remember what it felt like to have intimate spaces. In the midst of a wild ten acres, I wanted that again.

At the same time a friend had given me about 300 feet of old, heavy rope. I’d also been sent some zone-pushing ‘Platinum Beauty’ breeze grass from Sunset Western Garden Collection (Lomandra longifolia) and was nursing a ‘Brake Lights’ red yucca (Hesperaloe parviflora). 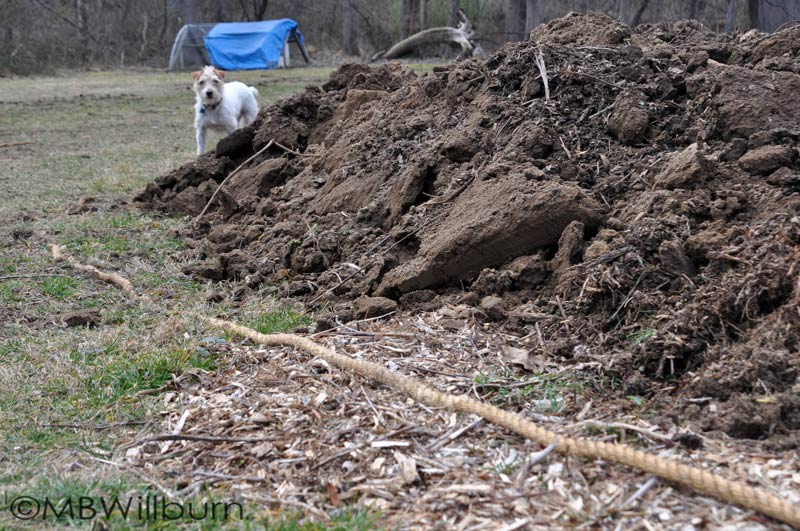 Piles of dirt within the rope boundaries of the new California Garden in early April.

I had homeless lavender in shades of ‘Hidcote Blue,’ ‘Munstead,’ ‘Provence,’ and the newest golden child, ‘Phenomenal’ – and a few other bits and pieces that screamed for dry, loose, elevated soil and a full sun position. While I contemplated the project, another friend threw three paddles of Western prickly pear at me and I began to dream of microclimates and Mediterranean themed nights.

I’ve had pathways. I remember what it felt like to have intimate spaces. In the midst of a wild ten acres, I wanted that again.

And that’s how these things happen.

Laying out the rope was beyond exciting. I gave myself wide pathways (two passes on the mower), and adjusted the lines against still-dormant turf over the following week until the curves screamed ‘yes!’ and I’d figured out where I was going to steal a bit of soil with the Bobcat.

In the midst of the process my husband weighed in.

“You’ve already got a lot of beds.” he said slowly (knowing it was understood that they were mine, not his). “Is this a great idea?”

“I need to get these plants in the ground.” I said officiously, as if such reasoning could justify the 30×15 foot extension I was currently implementing. 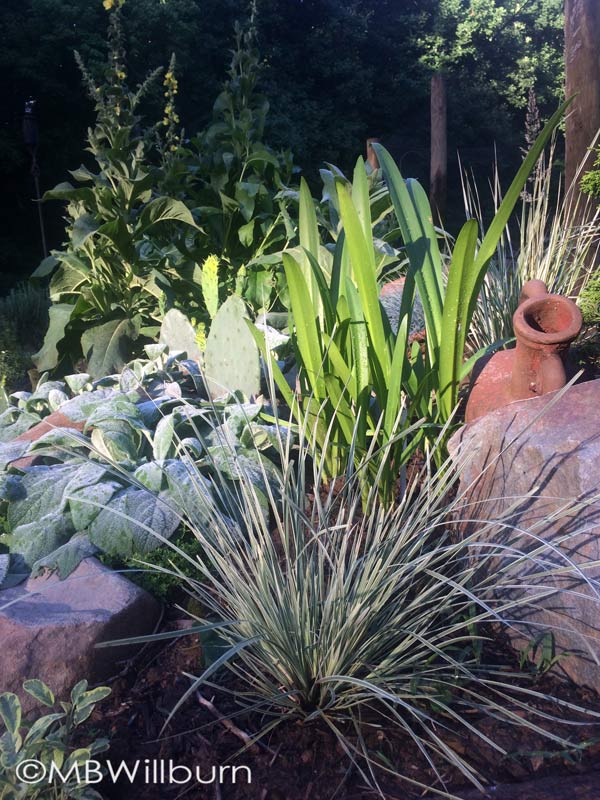 But I did have a plan for sanity. I would create the first elevated, rocky bed – The California Garden – and plant half of it with the weed-smothering, drought-resistant duo of ‘Helene von Stein’ lamb’s ear (Stachys byzantina) and wild mullein (Verbascum thapsus). (The fact that neither were native to California had very little to do with the decision to use them and everything to do with how much space they could potentially fill in a weedy Mid-Atlantic summer.)

The longer bed extensions would not be implemented this year, but their outlines would be mown to fool the eye – perhaps even next year’s eye too. If visiting critics chafed, it would be termed ‘a meadow project’ – instantly restoring credibility to the resident gardener.

So here I am, months later. In the early morning I stare at the lomandra catching the light, and marvel at how quickly verbascum and stachys fill space. There’s a ‘Fireworks’ evening primrose in there somewhere (Oenothera fruticosa), and throughout the month of June, its clear yellow blooms echoed those on the prickly pear.

The lavenders are doing so well in their new position that I moved the rosemary to join them, and when a friend sent a coveted creeping Waipahu fig (Ficus tikoua), I had just the place to tuck it between sun-baked boulders. What fun.

Those much contemplated paths have moved me several steps closer to the sense of ‘garden’ I desired, but they come with a price: edges to spade-sharpen, weeds to pull and yet more Japanese beetles to pick. I’m keeping up with the load (thank Heaven for ‘meadow projects’), but I know I’m now teetering between what I can physically maintain and what I can’t. Let’s hope I stay sensible.

A tough line to walk, but let’s face it – made so much better as a wide pathway.

This article reprinted with kind permission of The Frederick News Post