Coming Around to Canna

Coming Around to Canna

There are few persons more strident as those who have once loved a thing only to turn their backs upon it, unless of course it is those who have hated, and now love with equal fervor. In time, both groups will suffer the well-deserved jabs of those who knew them before their evangelization, but such is the price we pay for strict ideologies. 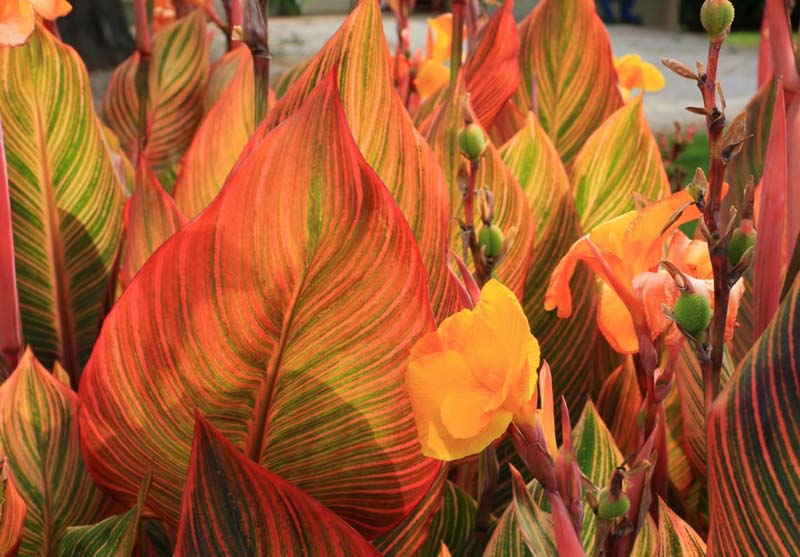 And such have been my dealings with Canna – the lily that is not a lily, the tropical that finds itself in temperate gardens more often than not.

If you are not familiar with canna lilies – or continue to confuse them with the soft half-cones and wedding flower fodder of callas (Zantedeschia), let me be the first to start the process of proselytization.

Cannas are a New World plant.  Many of them have been cultivated in the Old World and in Africa and Asia for a couple of hundred years, but they were originally imported there from the East Indies and the southern part of the United States.  Thus, hybrids such as ‘Bengal Tiger’ push the provenance envelope a little bit and impart the mystique of far eastern climes when the reality is much closer to home.

Cannas are rhizomatic – which means that at the end of a good growing season, where you once had one, you might now have several.  These rhizomes are eaten in many parts of the world as they have an extremely high starch content and high yield. 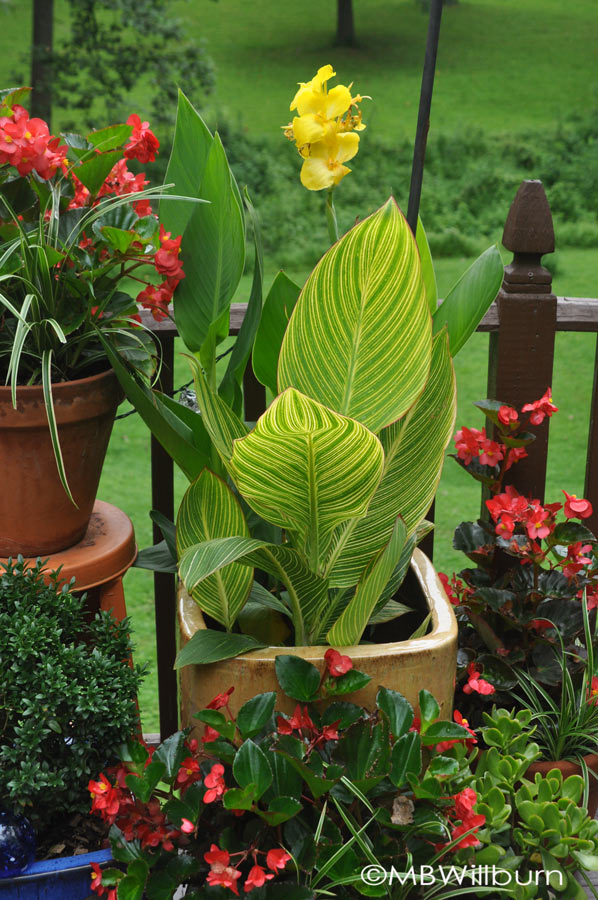 ‘Pretoria’ (aka ‘Bengal Tiger’) canna in a container with a yellow-flowered canna ‘Mango.’

When grown as a garden plant however, they are primarily grown for their foliage, which can drift from the horticultural definition of ‘black’ to the plainest of greens, with drifts in recent years into more tropical reddish yellows as seen in the Tesselaar series, Tropicanna. Flowers are just as tropical as the foliage and can persist late into the season, besting a first frost or two.

All this did not make them any more appealing to me – for the simple reason that in my 7a climate, they had to be dug in the autumn, and the only objects for which I was willing to go to such lengths were black truffles.

Over the years I have had many opportunities to receive end of season plants from other gardeners or $2.00 death rack specimens. I declined.  There is very little less appealing than a canna that has spent a hot summer in a one gallon pot, and I wanted nothing to do with it.

Then, on a trip to Charlottesville to visit the garden of a good friend, Lindie Wilson, author and restorer of the Elizabeth Lawrence Garden, I was introduced to the hybrid ‘Pretoria’ (aka ‘Bengal Tiger’).  I took a second glance.  She sent some home. That was the game changer. 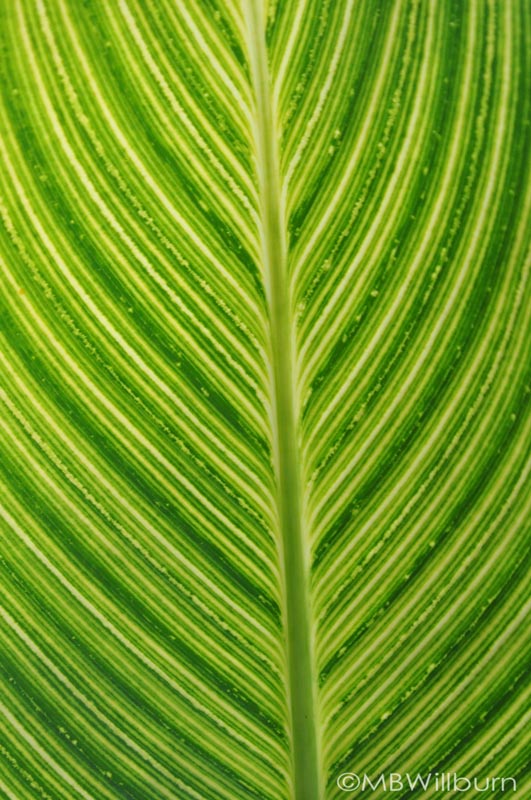 ‘Pretoria’ is the very essence of foliage variegation.  No vague mottling here, or marginated color that fades in less than four hours of sun.  No – this is bright, green and gold striation that can make a dreary corner come alive, excite a sedate water feature and push a humdrum container into the realm of ‘above average.’  If that weren’t enough, flaming orange blooms complement and enhance the foliage by mid-season.  Result: tropical mojo so intense you’ll be inspired to mix rum punch by the pitcher and crank up the samba. You may even take up cigar smoking.

Hyperbole aside, it’s a great plant. And as over-wintering goes, turns out it could not be easier.  Simply lift the rhizomes, inspect for any signs of rot and cut those bits off, then store in the cellar, basement, garage, or any other out of the way space that doesn’t dip below freezing.  I usually store mine in dampened peat to keep them from drying out, but friends have great success with unceremoniously dumping them in a plastic garbage bag. As I have so many this year, I finally feel safe experimenting with the latter method.

Early in the season (March/April) I put each rhizome with a healthy bud in individual gallon pots with potting soil and a granular fertilizer and stick them in a cold frame.  Canna are heat lovers and won’t do much till temperatures pick up, but this gives them a little head start.  Since my evangelization, I have now found a soft spot for the plain, red-flowered species, Canna indica, and am incredibly impressed with the architectural statement it makes in a repetitive planting scheme. 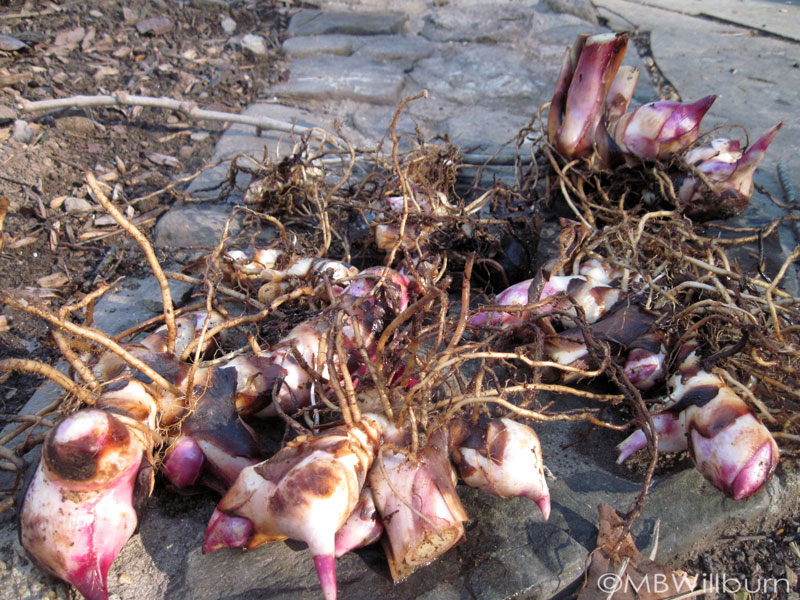 Why cannas, why now, you ask?  Well, chances are you might have a pot or two from summer containers yet to be emptied.  Why not take a few minutes to throw them under the house and see what happens next spring? When you don’t have to pay for lights, water, heat mats or general coddling, it makes sense to take a chance. 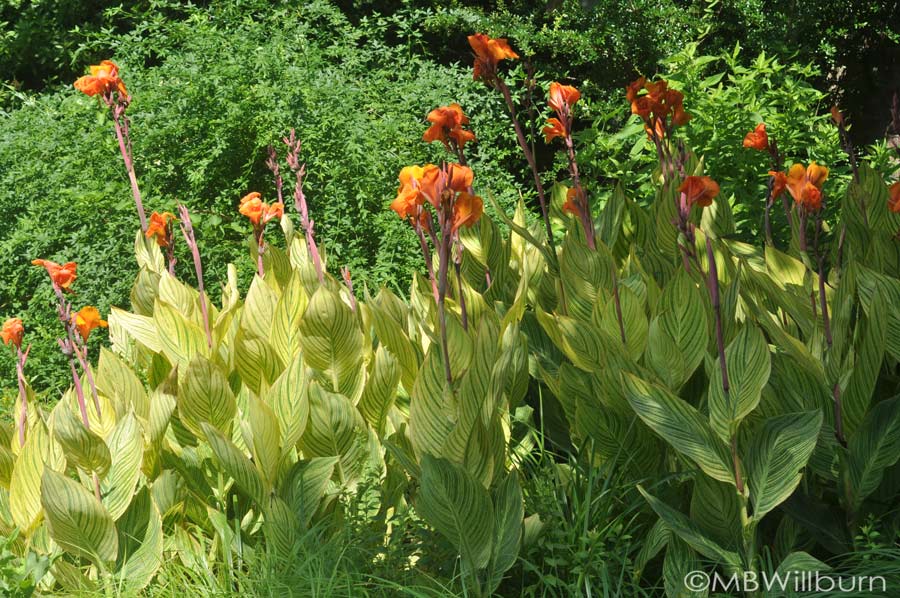 Next spring, consider branching out into some new areas with canna.  Plant a few as an accent behind a large pot in a bed to anchor it.  Throw some in a water feature. Make an unusual container combination (Loved ‘Pretoria’ with Euphorbia martinii ‘Ascot Rainbow’ this year). Or simply light up a corner bed with foliage that wows, even when it’s not blooming.

A version of this article was printed in The Frederick News Post, re-published with permission.