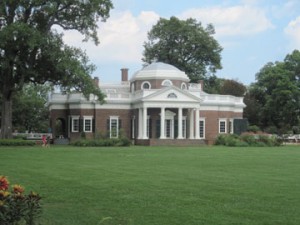 On a trip to Monticello in the middle of last year’s brutal summer, a friend and I wandered through a lush and verdant vegetable garden, unable to believe the scene which greeted us.  Seemingly impervious to drought and unrelenting heat, the garden breathed health, vitality, and a supernatural resistance to the weapons Mother Nature was currently lobbing at the rest of us in Realityville.

Not surprisingly, we felt inadequate.

Back home, the vegetable garden had long since cashed in its chips and found a taxi home.  Various invasive insects were sucking on the remains of Spring’s promise, and a fresh bunch of chard or a plump, juicy melon wasn’t to be had for love nor money. 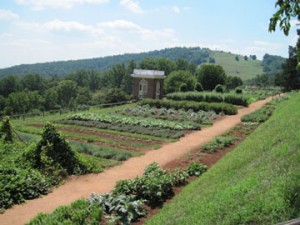 Yet here, in a garden where presumably the traditional watering method of choice was ‘dip-n-pour’, six-inch green beans hung from trellises groaning from the sheer weight.  Massive Savoy cabbages lined beds of feathery, delicate fennel ­and the smell of figs ripening in the sun pervaded one’s senses and spoke of Dionysian nights sipping wine and ignoring heat straight from the bowels of Hades.

There was something I was obviously missing.

Call me a killjoy, but I was determined to find out what it was before despair motivated me to go home and install a concrete patio pad where the tomatoes were currently being tortured.

I surreptitiously hunted around the tool sheds until I could find what I sought – evidence of underhanded sprinkler systems and large vats of Miracle-Gro – but instead came face to face with a darkly-tanned horticultural intern.  Under my penetrating glance and stern line of questioning, she gave up her secrets like a third-grader caught cheating on her math homework.

The garden had been separated into sections, she told me sheepishly; and in the middle of each section was a nozzle to which a long pole sprinkler was fitted in the mornings.  The sprinkler nozzles were virtually invisible at this point – now covered in the rich, green growth that they supported. 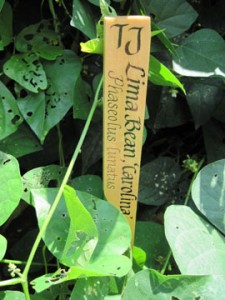 Feeling smug with the data I had wrung from my informant, I started to look a little closer at the “effortless plenty” in front of me.  Perhaps those Okra flowers weren’t so “self-supporting” after all:  a little poking around discovered a network of clever camouflaged stakes keeping them upright.  Maybe the finely tilled soil sprouted something other than vegetables:  sure enough, detective work found some Bermuda grass poking its invasive head up through the beets.  Perhaps the beautiful display of rudbeckia at the end of the garden had been deadheaded to appear so uniformly gorgeous:  as I’d suspected, sharply cut stems near the base of the plant told of the large scale bamboozling that was going on right under our noses.

The veil now ripped from my eyes, I ran through the garden with my friend breathlessly in tow, pointing out every magic trick for the deception it was, and finishing up with a five minute oral presentation on the merits of having a gardening staff of browned twenty-somethings at one’s beck and call. 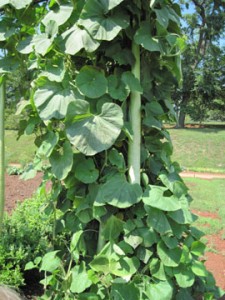 It's real. Believe me I checked.

My friend abruptly decided she’d had enough of gardens and lectures and smug know-it-alls and headed for the house, muttering some nonsense about “enjoying the magic.”

I followed, pointing out the staked delphiniums along the way.

For those of us who till the soil, battle the elements and scrub our fingernails four times a day, it’s good to see another gardener’s underwear every once and awhile.  Sure, there are days that we just wish to smile at the beauty and effortlessness of a perfect landscape, but there are far more days when a knowing glance at a camouflaged spider web of peony supports can make us smile with deeper pleasure.

In short, don’t judge the insides of your garden by the outsides of someone else’s.  Who knows what kind of sprinkler system lurks within the larkspur, how many thousand bamboo stakes they have erected amongst the foxglove and how many teenagers they’ve paid to edge and weed the pathways.   With a hoard of twenty-something interns at my disposal I could move mountains – or at least get the carrots watered more than twice a month.