The Garden in August

The Garden in August 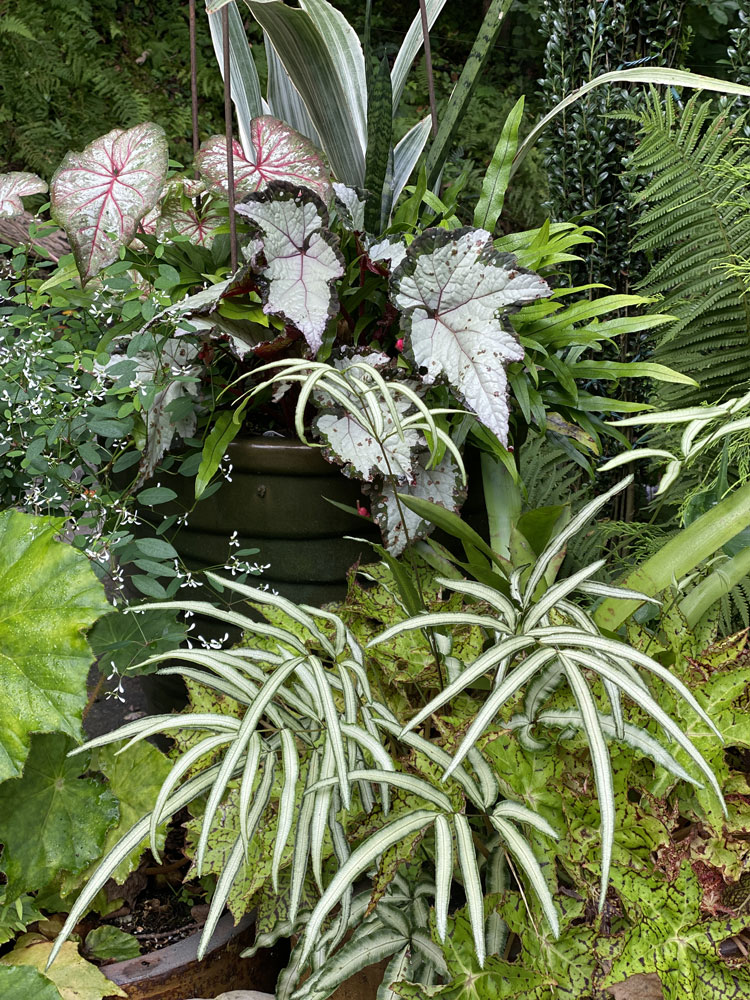 There are just a few days of August left, and though it almost seems futile to discuss the month in terms of its garden life, I find myself finally with an hour or two to do just that. And, as Christopher Lloyd once said, the time to do a thing is when you have time to do it.

I feel that I have been away from my garden almost as much as I’ve been with it this month; but I am seeing the wisdom of many previous planting decisions – dense planting schemes, plants that respond to heat, deep, rich beds fashioned on hügelkultur…all are combining to give me a garden that can cope without me for short periods of time during the growing season.  It’s more about the editing that needs to be done, than the all-hands-to-the-wheel weeding of previous years.

This month has been exceptionally busy for me as a speaker, ending with the Plant Trial Day Symposium at the Cincinnati Zoo, which promises to be an incredible program running the gamut from plant exploration, to plant people, to just plain plants. (Though it is unlikely that any of them will be plain!)  Follow the link for a virtual option – it’s a speaker lineup you won’t want to miss.

There are still moments of feeling overwhelmed – many of them.  I spoke to a good plant friend on the phone this morning who spoke of severe burn out and needing a break from the heat and humidity.  We all do – though social media will rarely show us that reality when we’re scrolling in quiet moments of melancholy.  And we all need to see a little reality that isn’t our own.

Hopefully I told her enough stories of splaying grasses, defoliated witchhazels and overflowing laundry baskets to make her realize we’re all in this together. It’s just August.  If you’re only just getting started in gardening, know that August is one of the toughest months we gardeners face in the Northern Hemisphere – you are not alone.

When I’m feeling overwhelmed, I try hard to make time for a little dusk-wandering.  No matter what your garden looks like, it is at its best in the magical hour before the light leaves the sky.

Weeding. Pruning. Mowing. Harvesting. Processing. Each day can end in a lot of self-recrimination unless you accept the lessons being taught and apply them to next year’s garden and next year’s you. You can see that and feel it at dusk.  The light is soft, the foliage has regained its turgidity, the flowers are heavy with scent.  This is the best time to answer tough questions because you’ll be gentle with yourself – it’s a gentle time of day.

More of this? Less of that? More drought resilient plants? Less containers to water? Instead of feeling fed-up, use that energy to make smart resolutions. I’ve made a few myself this year.

“I should have planted that!” for the August garden

Carefully observing neighboring gardens month-to-month and putting in some of the wonderful things you see during the next planting season allows you to successfully increase your garden’s display season without having to experiment too much with timing. For the challenging month of August, how about a dip into some tropical foliage?

Curcuma longa ‘Snowdrift’ – (snowy turmeric) Okay I just made that common name up.  As it’s August and  Tropical Plants and How to Love Them has just won two Silver Media Awards from Garden Communicators International (!!), it is my solemn duty to give you a tropical plant that is making me smile every time I turn the corner and glimpse it nestled into the allium. You’ve probably seen turmerics on garden center racks over the last year, but chances are, you haven’t see this one. Or at least, you’ve seen those fascinating cone shaped flowers tagged Siam Lilies, and didn’t know what they were. 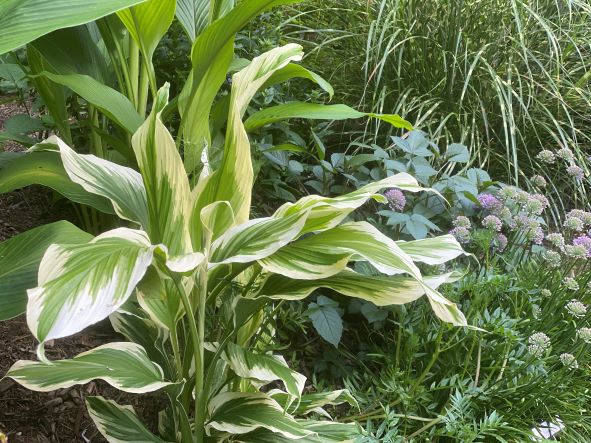 A couple words about the straight species. Turmeric is in the ginger family and C. longa is the common, edible super-food yellow spice we’re using in everything from vitamins to housepaint these days.  The powders and potions are everywhere, but it’s also easy to grow as a plant. Growing it yourself means you can freeze those rhizomes which multiply like crazy and grate them with a microplane in your foods or toothpastes or whatever the newest craze is.  Toothpaste is probably not a great idea – turmeric is also used a a dye.

Tropical foliage responds to hot and humid days with strength and vigor, and turmeric is right there with them. C. longa ‘Snowdrift’ is a fabulous selection of this species, with leaves that sport a wide, creamy edge and grow to 24″ tall.  In late summer in a healthy clump you’ll be treated to cone like flowers in yellow white with the lightest tinge of pink. 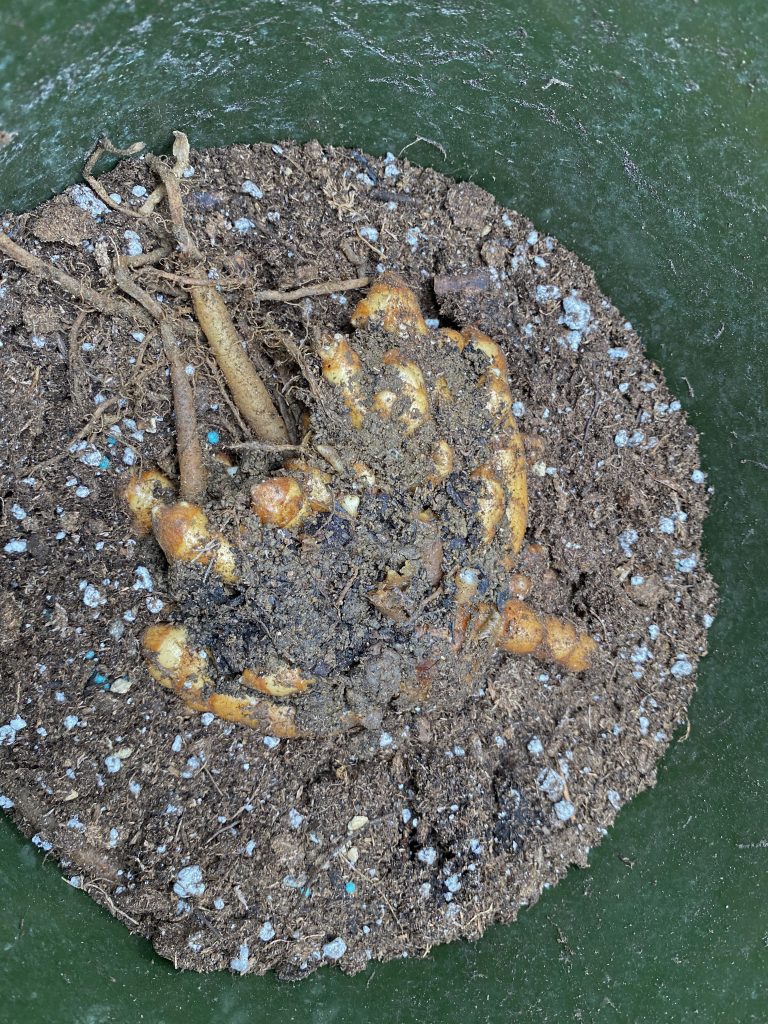 If you wish to keep ‘Snowdrift’ for next year (and it’s hard to get hold of, so you might want to), dig it (the roots are deceptively shallow), wrap the roots in a dry towel and place in a garbage bag.  Keep it in a frost-free location (35-40F) without light for the winter.  This could be a garage, basement, barn kept above freezing, etc…

Gingers like to get started early in the spring for best results, so in late winter, early spring, unwrap the roots, separate the rhizomes as much as you wish (my original rhizome was about the size of a knuckle) and repot the turmeric in good, moist soil with slow release fertilizer mixed lightly into the soil. Then give the pots a bit of heat, or a least a warmer room.  Don’t water until you see some budding.  I usually put mine under a light to accommodate and stimulate growth.  Then, after your last frost, plant up in garden beds or pots. 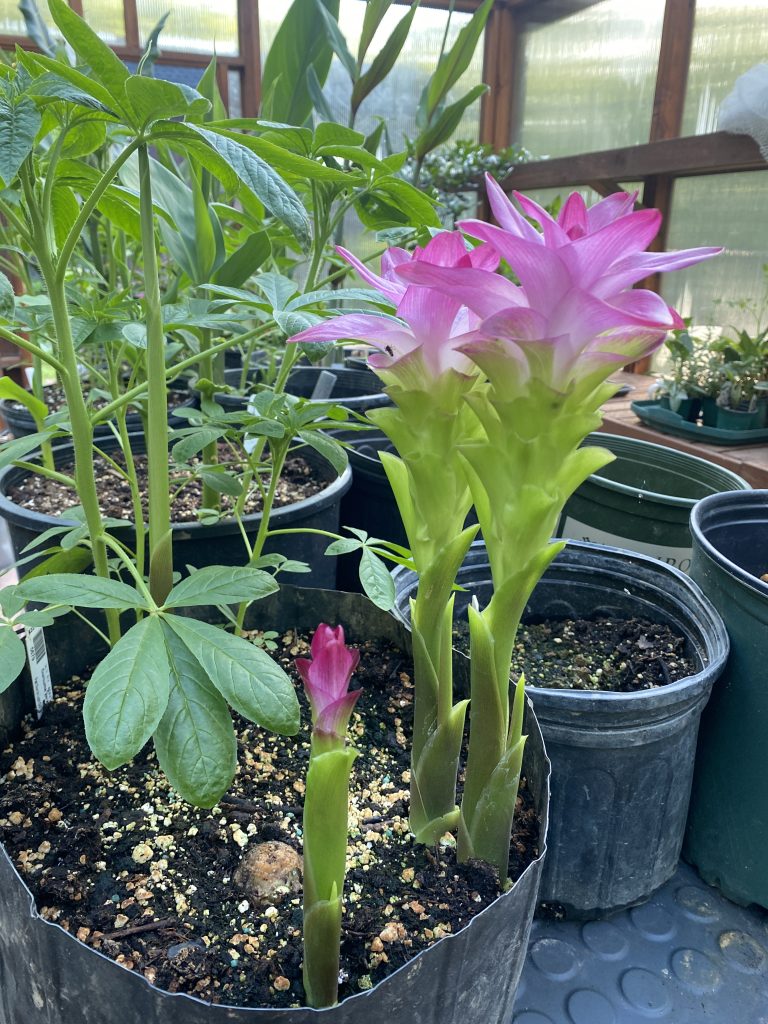 Another turmeric: The fascinating flowers of Curcuma zeodaria ‘Pink Wonder’ in mid spring.

For a few more August-loving tropical selections, and tips on overwintering, click here. Or here. Or indeed, here.  Can you tell I love my tropicals?

Outside Tasks for the August Garden:

♦CLEARANCE SALES!  Yep.  It’s the month for it.  By this time in the Big Box retail world, it is time to cut losses and start thinking about shelving for Christmas bling.  I hate this arrangement, but the silver lining is that the clearance racks in the back of the nursery sections are starting to fill up.  I could warn you of the need to take your time, research the plants and not spend excessive amounts, but there’s a fair amount of hypocrisy there I’m not comfortable with. 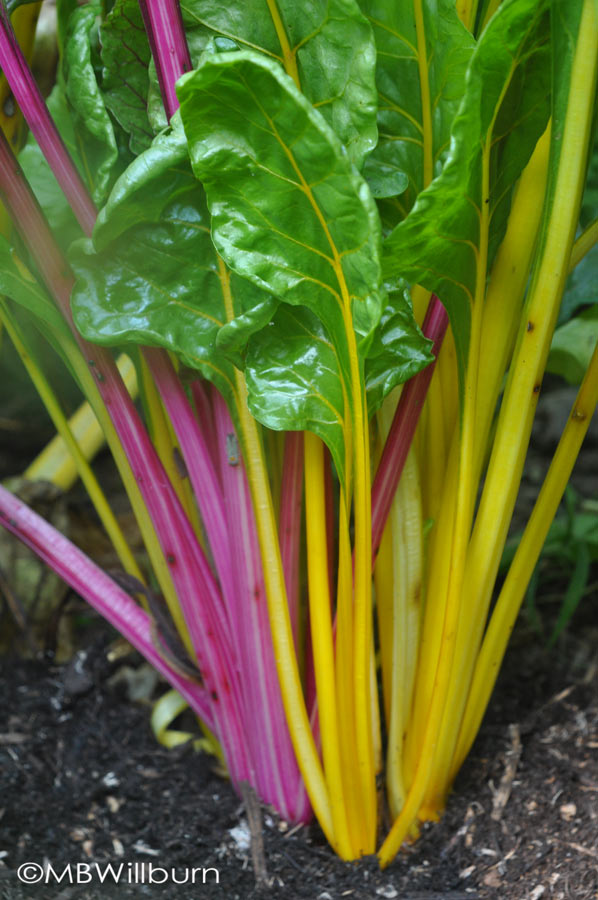 ♦It’s not the ideal time to move shrubs and perennials, but I subscribe to the late Christopher Lloyd’s philosophy that the time to move something is when you have time. If you need something moved, and the available time is right now, you can do it – but you will have to take extra care to keep it watered. (And don’t become too attached.)

♦Time to plant the last of the seedlings for cool-season crops. Broccoli, cabbage, kale and cauliflower should go in now and must be faithfully watered. By the middle of the month, it’s time to put in seeds of lettuce, spinach, arugula and other quick growing cool season greens. Don’t forget cilantro!

♦Much like July, you don’t want to be gardening between the hours of 11-6 unless you really have to.  This schedule, and the long evenings, work well for those who work outside the home.  By the time dinner is eaten and washed up, there is still time and light to connect with your outside space without exhausting you.

♦The edible garden is really producing now.  Cucumbers, zucchini, beans, tomatoes, peppers, eggplant….you might be up to your neck in veg.  Two points:

♦Make sure you get things harvested quickly, or you will lose future harvesting potential from the plant; and,
♦Don’t hoard veg you are not going to deal with, thinking you will.  Give it to a friend, give it to the food bank – make it count for something.  Most likely there will be plenty more where that came from so if you didn’t get to it now, you can make up for it later.

♦Keep a close eye on the state of your edibles and ornamentals, as bugs can get the upper hand quickly. In my world, it’s the squash bug and the harlequin bug that do the most damage in August, and I am handpicking every single day. Feel like spraying instead? Kaolin is a terrific organic barrier made of white clay, but will need some washing off, which can be difficult with some crops like chard and kale.

Late fall/early winter and the garden is not givin

It’s that time! With three professional tips, yo

♦It’s easy to get overwhelmed in the August garden. The heat and humidity can exacerbate a difficult day, and before you know it you are looking at the garden as a onerous chore, not a quiet connection. Time yourself out and get back to it tomorrow, and try to realize that anything thing you do out there – any vegetable you harvest, compost you top-up or perennial you put into the ground – is a great thing. Just because you can’t get to seventy other things on the list doesn’t make you a gardening drop-out, it makes you totally human.

Gardening is a process, with surprising flashes of result thrown in to keep us moving forward.

Inside Tasks for the August Garden:

♦In August, we are tempted to spend more of the daylight hours indoors than out, so take advantage of that feeling and start to tidy up spaces for the migration next month of tender houseplants and tropicals.

♦If you haven’t already learned your lesson re: tender pot plants, this month is usually the month you can find great clearance deals on larger indoor plants.  Many of these can populate your deck next summer too.

…the wind
Wanders by, heavy with odors
Of corn and wheat and melon vines;
The trees tremble with delirious joy as the breeze
Greets them, one by one-now the oak
Now the great sycamore, now the elm.

– Hamlin Garland
– from “In August”