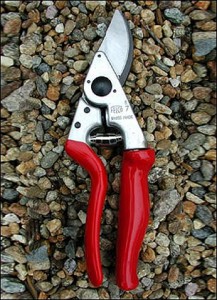 For some gardeners, pruning is nothing more than a necessary evil: an annual task to be scheduled right along with washing windows and doing one’s taxes – and with equal enthusiasm. What is it about pruning that reduces confident, capable gardeners to quivering mounds of insecurity, frantically clutching clippers and Cooperative Extension diagrams as they tiptoe towards a towering crepe myrtle?

Give me a woman who can feed a family of five for a summer with the contents of just one of her uber-productive raised veggie beds; a woman who is fluent in scientific nomenclature and knows the difference between Dicentra canadensis and Dicentra eximia without reaching for Newcomb’s Wildflower Guide; and I can give you a gardener whose hand still trembles as it makes the first hard cut on a common Euonymus.

Murphy’s Law dictates that just when you think you have it down pat, that after years of study and experience you have mastered the rules and regulations – you are faced with a shrub that you have never seen before in need of a decisive haircut. Murphy’s Law also dictates that your most knowledgeable gardening friend will be looking over your shoulder at the time making clicking noises with his tongue.

However, for every one of us that steps back twenty times to estimate the effect of each potential cut (and still goes into the house for a strong cup of coffee and a few minutes to think before we do anything hasty) there are those that consider pruning to be one of the highest forms of artistry in the garden.

I will never forget the day I was visiting an old friend’s garden, marveling at his clever use of shrubs to anchor and connect various beds, when I came across a shrub that made me do a double-take. A Vanhoute spirea surely, but unlike any I had ever seen. This one looked like it had been put into a giant vase – its base trained to strong upright stems that, three feet up, exploded into a cascade of perfectly symmetrical arching branches frosted in white blossoms. I just stood and stared at it, having never considered such a shape for what is naturally a wilder, freer growth habit. My friend observed my open mouth and said, “I love pruning! It’s my favorite part of gardening.”

His garden certainly bore out this sentiment – and his talent. Photinias trained as trees, Mugo pines kept delicately and expertly clipped, even the Rosa banksia growing up a rough and tumble oak tree had a certain carefree tidiness to her manner which spoke of stepladders and pole-pruners and more time than I was ever willing to allot to a rose back then.

“Be willing to experiment!” he told me. “It’s what gardening is all about.”

I smiled weakly and he offered me a large glass of iced tea and a place to sit. But as we chatted, I gradually came to the realization that the man might have a point. He had not touched each and every plant in his garden with his sculptor’s hand. Nor had he had deformed and frustrated plant structures by binding the feet of his shrubs and trees (nothing drives me crazier than a tightly clipped three foot forsythia hedge). Rather he had selected specific plants and worked with their innate structure to create something fascinating and…well…artistic. 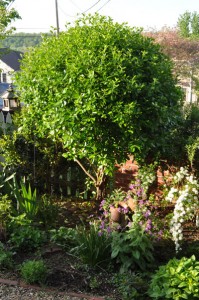 So, while continuing to pay careful attention to the old adage “bloom then prune” for 95% of my pruning adventures, I have begun to venture into the wild world of “prune first, ask questions later.” The less I like something, the more motivation I have to make it look different as a final step before I pull out the spade and the phone number of a friend who will take anything green. To that end, a Manhattan euonymus that was starting to bore me senseless has turned into a little tree that bores me less ­– and ditto a particularly annoying holly.

True, there have been casualties. There are some lilacs insisting that they were never meant to be anything but the sprawling shrubs Mother Nature intended them to be, and a couple French hybrid lavenders that had the effrontery to die after a particularly brutal run-in with my loppers; but in the first case, they’ve grown back, and in the second, that’s what cuttings are for.

As a rule, I am not a rule-breaker; but I must say I have enjoyed pushing those regulations a little bit lately. And a more relaxed attitude has helped steady my hand with regards to the hum-drum maintenance pruning that takes up the majority of my time.