A Garden Today, But What of Tomorrow?

A Garden Today, But What of Tomorrow? 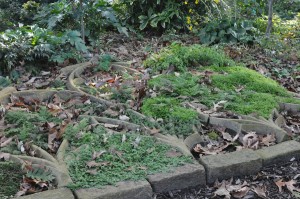 And on the pedestal, these words appear:
“My name is Ozymandias, king of kings:
Look on my works, ye Mighty, and despair!”
Nothing beside remains. Round the decay
Of that colossal wreck, boundless and bare
The lone and level sands stretch far away.”

It is the time of year when, exhausted by my garden, I am reminded of Shelly’s Ozymandias, and the fleeting nature of our creative efforts on Earth.  Granted Ozymandias was an Egyptian King, and I am merely a gardener; but it does seem to me in the midst of my mowing, hacking and pruning that this little kingdom of ours is transitory, and will slip back into oblivion the moment I hang up the shears for good.  One hundred years from now, much less one thousand, all that will remain will be the vines and the crabgrass – the sights and smells of what was once a garden turned ‘boundless and bare.’  I suppose I should prefer such a scenario to the prospect of endless housing subdivisions blighting the landscape; but then, they too may be only a half-forgotten memory at that point.

After all, where are the Hanging Gardens of Babylon?  Once one of the Seven Great Wonders of the Ancient World, they are now merely the stuff of legend, documented by Greek historians cribbing from the texts of historians before them.  If a Mesopotamian king can’t keep his petunias on the map, what hope have I of making anything around here permanent?

“You have to stay on top of it.” said the previous owner to us as she handed over the keys and surveyed what had been their family home for forty years.  “Nature wants it back.”  There was a smile on her face at the time – yet not one of malice, merely that of gentle understanding and respect for a landscape that is always moving quietly and inexorably toward wilderness.

Such thoughts can paralyze the ambitious gardener, who, powered by the spirit of creativity and the drive of ancient kings (if not the treasury) wishes to build pergolas and patios and plant testaments to her horticultural prowess. For if it is an accepted fact that tempus fugit and nature always wins in the end, her darkest moments might elicit a small voice that questions why she continues to punish herself with darkened cuticles and a tired back.  A small voice that, encouraged by heat, exhaustion and seeds that fail to germinate, sees the lone and level sands of the future…and is tired.

One can approach this long, dark afternoon of the soul in one of two ways.  Either remind yourself that what you do you do for the pure joy of it. That beauty is truth, truth beauty – that is all ye know on earth and all ye need to know.  Or…you can plant a sequoia and indelibly put your mark on the next thousand years.

I’ve chosen the sequoia.  There’s room, it’s August, and I just don’t have the mental agility these days to wrestle with truths I know to be legitimate, but cannot prove.  Sequoia sempervirens, impulsively grabbed in a rare plant nursery in North Carolina, will be around long after I’ve cashed in my chips and the composite decking of my neighbors has finally disintegrated into petroleum-scented dust.  When I’m tugging at wine berry and yanking my thousandth multi-flora rose, perhaps its promise of permanence will keep me going.

Providing it lives of course.  It’s a coastal redwood, native to the Pacific coast from Monterey to Oregon, and no doubt it’s wondering what an East Coast winter has in store for it and where to get a half-decent cappuccino.  But I’ve got my kid gloves on and burlap wrap for the winter in the potting shed – there is hope.

As I child I wandered with my sisters and brother under the canopy of its cousins, too small to truly comprehend the profundity of such longevity, but finding it magical nonetheless.  These forest leviathans eventually dwarf nearby trees, but getting to a respectable height will take some doing.  Sequoias are heavy feeders, heavy drinkers and don’t take kindly to biting winter winds.  Making this guy a permanent fixture won’t be easy.

But what is permanence after all?  Oxymandias hardly thought his effigy would end up ignominiously, face down in desert sands.  At the end of the day, I can plant this sequoia, baby it through its first five years, revel in its next thirty and Joe Blow Developer can build a bypass right over the top of it fifty years from now.  There are no guarantees.

I like to think that there are a thousand reasons why we don’t need them, but as I said, it’s August. I don’t know that I can come up with any until October at the earliest.  Best just to plant the sequoia and hope for a few mild winters over the here and now.